Back
Winter flowers along the Camellia Route in Galicia 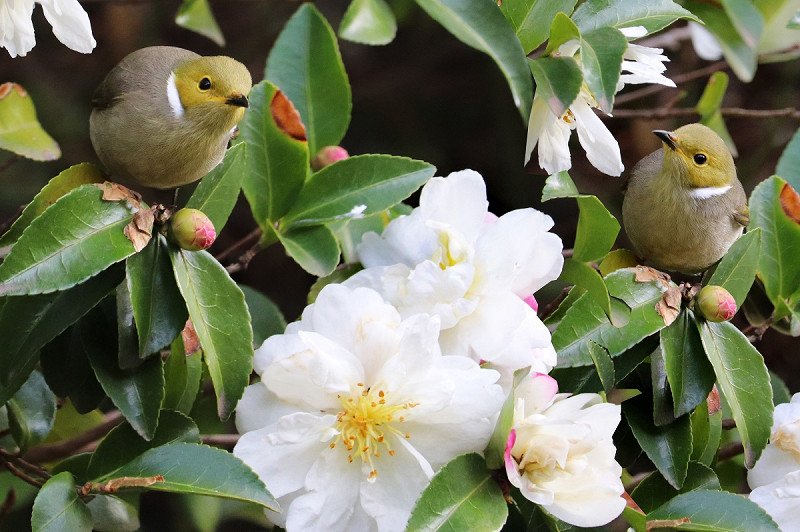 Winter is still in force, but you don't want to say goodbye to the strong colors of nature yet? You don't have to. Because the region of Galicia in the north-west of Spain literally blossoms in winter: between December and March is the time of the camellia bloom. The Ruta de la Camelia - the camellia route - takes you through the most beautiful gardens in the region and is therefore perfect for a winter trip in a mobile home or caravan. Because in addition to blooming gardens, Galicia also offers a lively gastronomic culture. The star on the wine list: the Albariño, a fruity-fresh white wine. 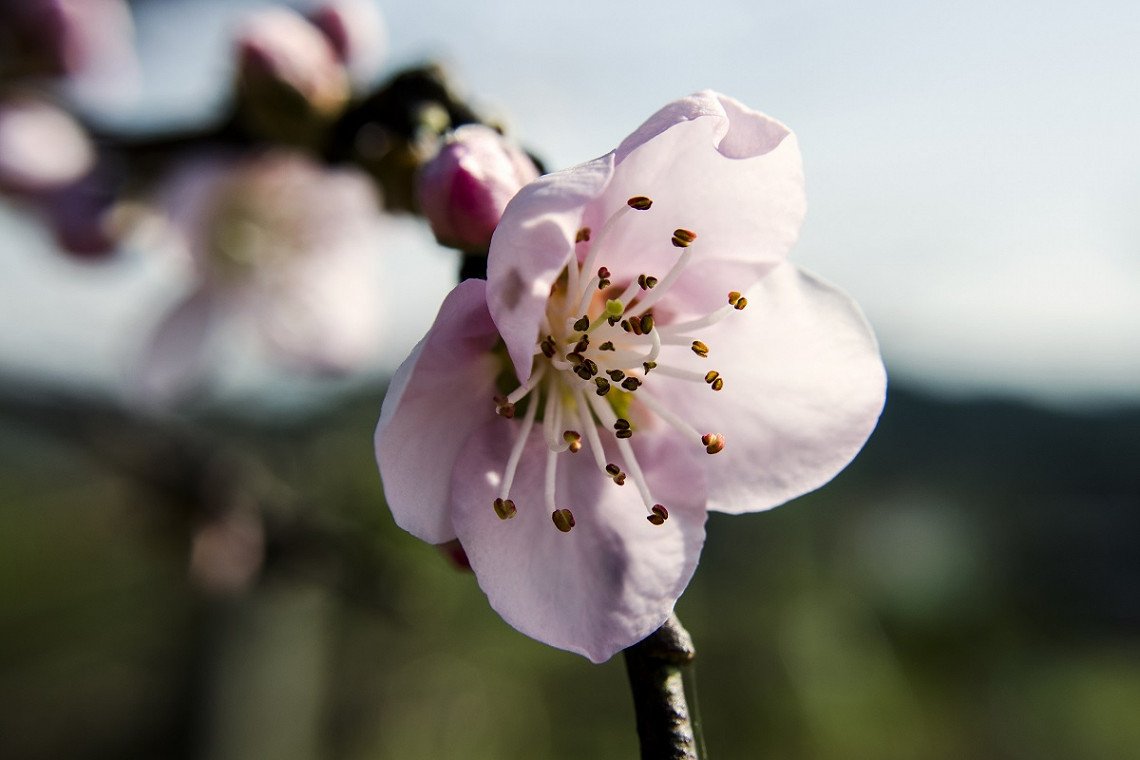 Galicia has ideal climatic conditions for camellias during the winter months. Photo: Pixabay

Why camellias in northern Spain?

Galicia is not only home to the Rías Baixas Wine Route , but also offers around 8,000 different camellia varieties the right conditions to thrive. The shrubs reach heights of up to 20 meters and their flowers range from white to yellow to pink-red tones. They owe this growth to the mild and rainy winter months, during which temperatures usually do not drop below 5 to 10 degrees Celsius at night and around 15 to 20 degrees Celsius during the day. In addition, there is the acidic soil, which the camellias also love.

But how did the camellia get to Galicia in the first place? In the beginning, the ornamental shrubs were a privilege of the nobility. The kings and queens of the country had the first camellias imported from China and Japan over 300 years ago. They were considered particularly precious and adorned the gardens of the palaces and manor houses. Today you can visit twelve of these magnificent gardens - they form the Camellia Route. The route runs close to the coast through a hilly landscape lined with eucalyptus trees. Our tip: Even though the Galician winter is rather mild, the warming rays of the sun like to alternate with short rain showers. Therefore, it is definitely recommended to have rainproof clothing with you in your motorhome.

Especially at low tide, the beach of the cathedrals is worth a detour from the camellia route - then large rock arches rise out of the water. Photo: Pixabay

Pazo is the Galician term for mansion. In total, the camellia route is around 200 kilometers long. Since the stations are close to each other, you can relax and take your time on your motorhome tour through Galicia or park your caravan on a beautiful campsite and drive to individual parks and gardens. Our one-week tour suggestion includes five of these camellia gardens, which combine the splendor of flowers with culinary art in bodegas (wineries) and vineyards. 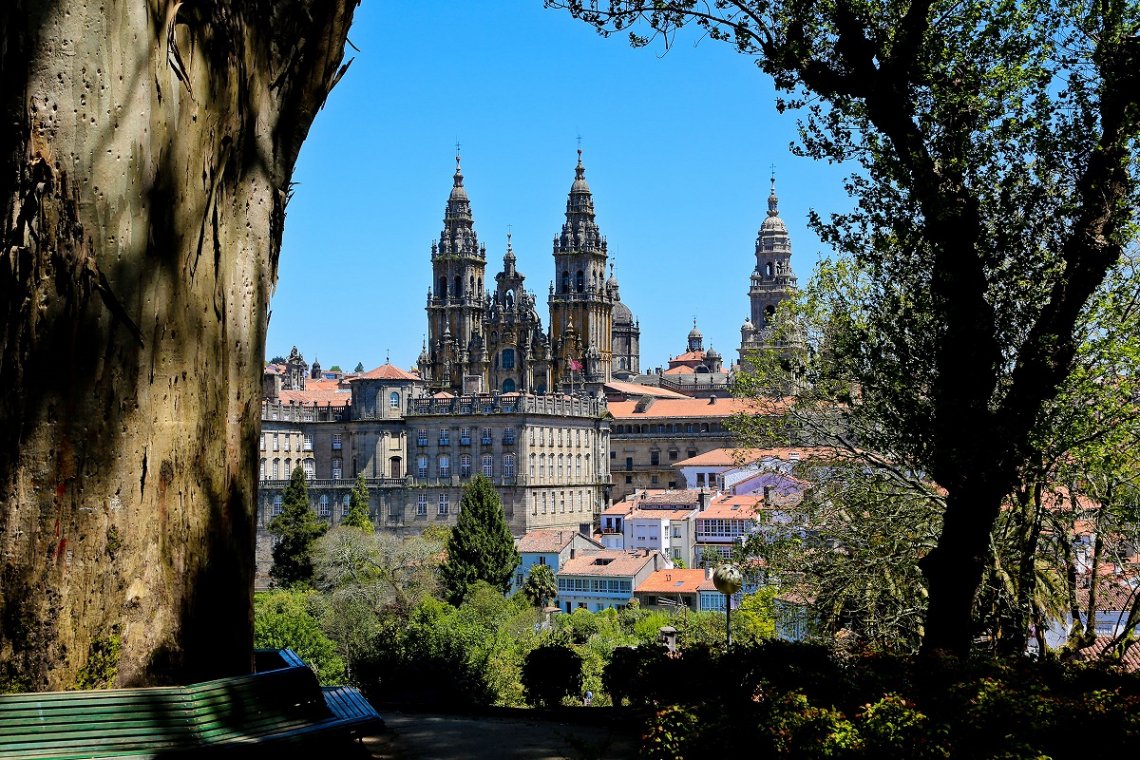 Our journey begins in Santiago de Compostela, the capital and religious center of Galicia. As the official end of the Camino de Santiago, the city is a famous pilgrimage destination. And of course there is a lot to see here. But anyone who has had enough of the pompous buildings and wants to escape the hustle and bustle should also pay a visit to Parque Alameda. As a blooming idyll, it is situated on a hill in the heart of the city. Once designed in the style of a country estate, around 100 different plant species thrive here - including countless camellias. The city hosts cultural events here all year round. Perhaps you will witness a concert or a theater performance. To the east of the entrance is a vantage point from which you can see the old town with its imposing cathedral.

Also worth seeing: the Santa Susana oak forest next to the park. Magnificent oak trees tower up here. Some are several centuries old - as is the small baroque chapel that is hidden in the forest. After a walk through the park, the epicurean side of Santiago de Compostela awaits: in the two streets of Rúa Franco and Rúa Raíña, many small traditional bodegas and restaurants are lined up. Here you can enjoy typical Galician cuisine - for example scallops and many other fish and seafood dishes - with a glass of Albariño. Tip: Especially in winter, many restaurants offer whole menus at reasonable prices. 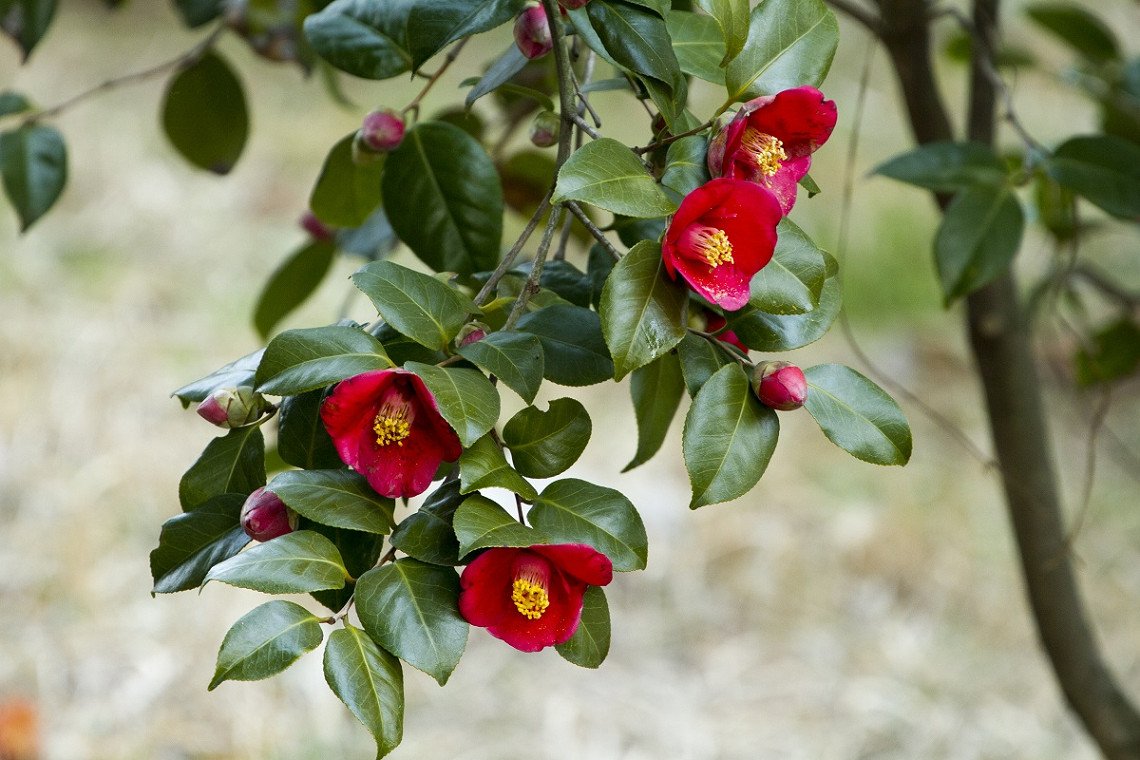 Our next destination is the Pazo de Rubiáns estate. It is located near the village of Vilagarcía de Arousa and has one of the most beautiful and oldest camellia gardens in the country. Once laid out as a majestic winter garden, around 800 different camellia varieties have been in bloom here since the early 19th century. Our tip: The wine town of Cambados, which is also known as the cradle of the Albariños, the wine museum and the traditional Pazo de Fefiñáns estate are in the vicinity of the Pazo. Here you can take part in guided tours and  wine tastings and experience the local history of wine up close.

In the Pazo Quinteiro da Cruz you can find camellias of every color - from densely filled to mackerel to simple rows and visible stamens. Photo: Pixabay

Continue to one of the largest camellia gardens in Europe, the Pazo Quinteiro da Cruz in the municipality of Ribadumia. More than 1,000 different camellia varieties bloom here in the most colorful colors. In the middle of the seven hectare park there is an 18th century country house. Large granaries, old agricultural machines, dovecotes, fountains and the small chapel remind the visitor of the historical Celtic side of Galicia. The small farm shops with local products also reflect the rural side of the country. At the same time, the mansion is a winery, where Galicia's favorite wine is still produced today. On the tours you will get interesting insights into the production - tasting included! 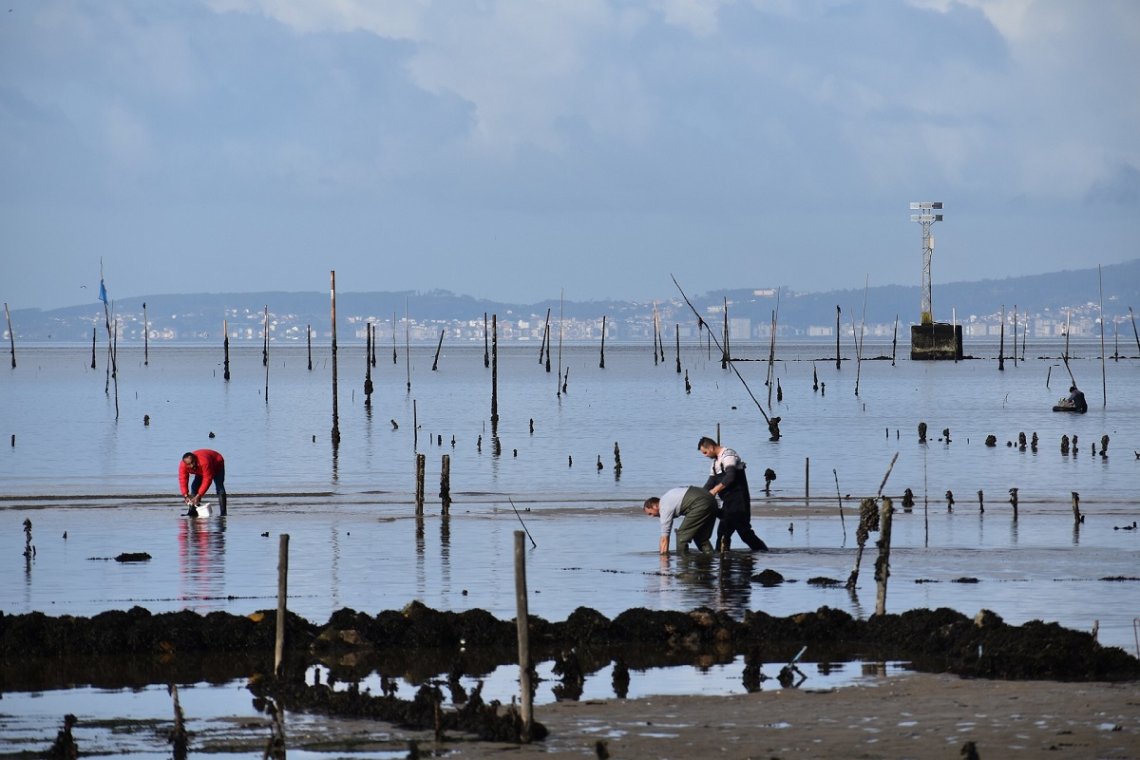 Our next destination combines strolling through heavenly gardens with sumptuous delights and yet another use of the Albariño grape: namely its therapeutic and cosmetic or skin-tightening effect. First stop is the garden complex Xardins do Pazo da Saleta in the municipality of Meis. Here, too, idyll is on the agenda. Thousands of camellia blossoms grow around a meadow on which a farmhouse, a granary and a small chapel with a colorful ceiling fresco have been preserved. The tour then continues to the port town of O Grove. It is not for nothing that it is nicknamed the capital of seafood, because the place offers an astonishing density of authentic fish restaurants. The mussels couldn't be fresher - they come directly from the wooden breeding colonies, the so-called bateas, in the Ría de Arousa bay. 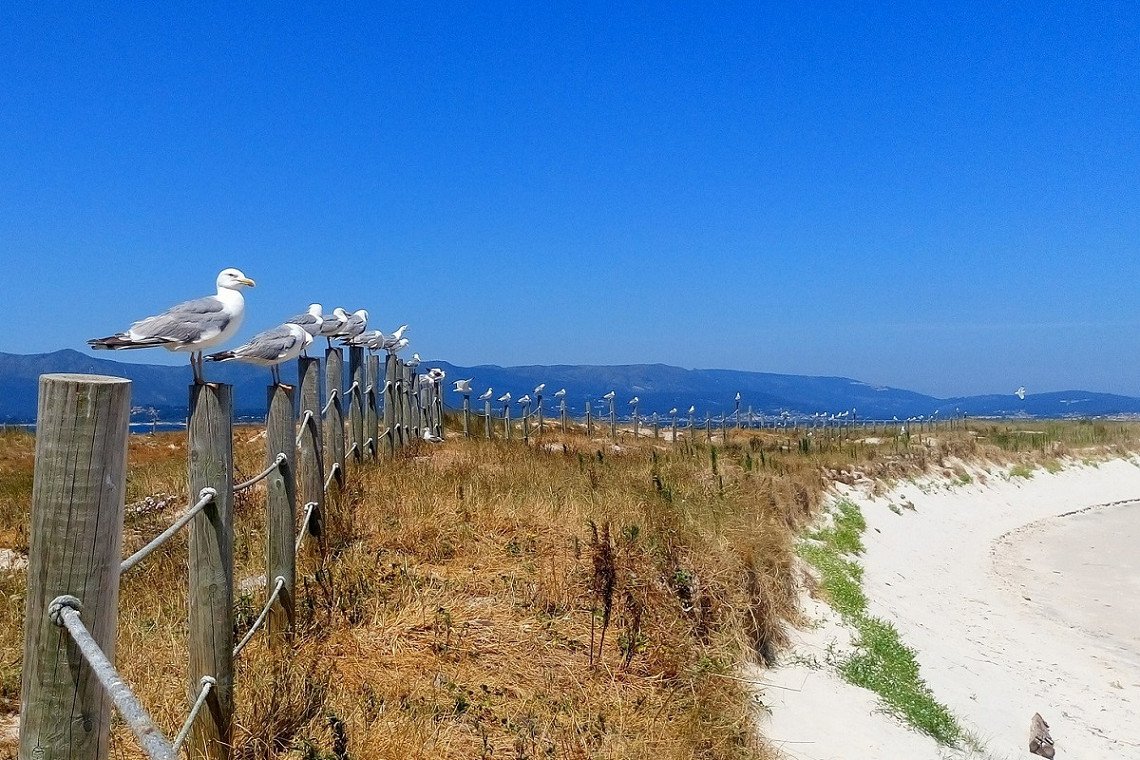 The sandy beaches of La Toxa, which are lonely in winter, invite you to take long walks. Photo: Pixabay

We leave solid ground and take one of the ships to the nearby island of La Toxa. There the Albariño grape shows itself yet again from a completely different side, namely as part of a thermal treatment. You will find a wide range of wellness offers on La Toxa. With Thalasso climatic therapy, you should benefit from the health-promoting effects of grapes: Sea salt, sand, sunlight and algae treatments are combined with products made from theses vitamin-rich grapes and are supposed to thus ensure physical and mental well-being. Many natural cosmetic products such as soaps, bath salts, body oils and sauna additives are manufactured on La Toxa, which are of course ideal as souvenirs to take home. In spite of all relaxation, you should also make a detour to the island's long white sandy beaches, which are among the most beautiful in Galicia. Especially in winter, the landscape here is seemingly untouched and particularly lush. 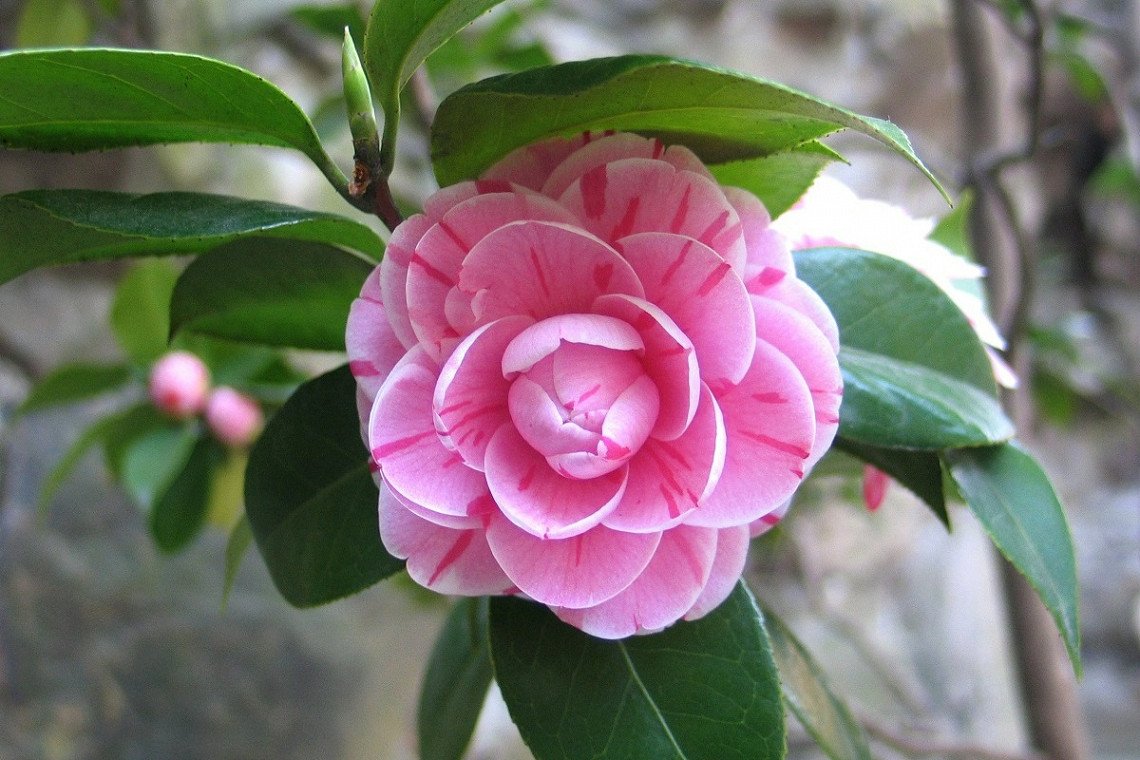 The Soutomaior Castle Park is home to more than 500 camellia plantations. Photo: Pixabay

Tip 5: Spain's oldest camellia in the Garden of Excellence at Soutomaior Castle

The end of our tour will once again be a royal stop. We visit the castle Castelo de Soutomaior in the municipality of the same name in the Redondela region. Pedro Madruga, a key figure in Galician history, once lived here. One of his sons would later travel to the Caribbean at the side of Christopher Columbus' son. But back to the castle: As it is located on a hill, it offers a beautiful all-round view of the many wine terraces. It's garden was recognized as a Garden of Excellence by the International Camellia Society. Not only is it beautifully landscaped and houses around 500 camellia plants of 25 different varieties, but its prominent 18-stem camellia is also said to be the oldest in the country.