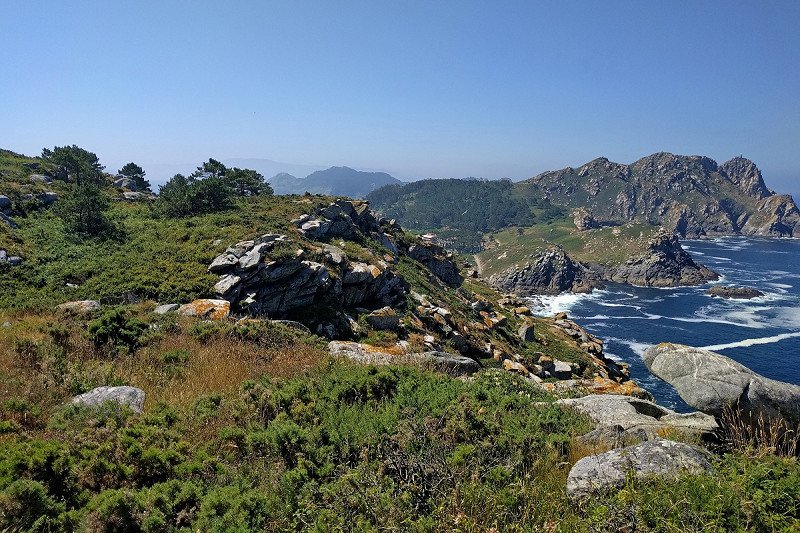 There are many good reasons for a trip to Galicia in Spain. However, one of the best reasons is undoubtedly the lively culture surrounding the traditional Albariño wine. It is one of the best white wines in Spain and has a long history. With the motorhome we embark on enjoyable paths and get to know the mystical and fertile home of the Albariño. 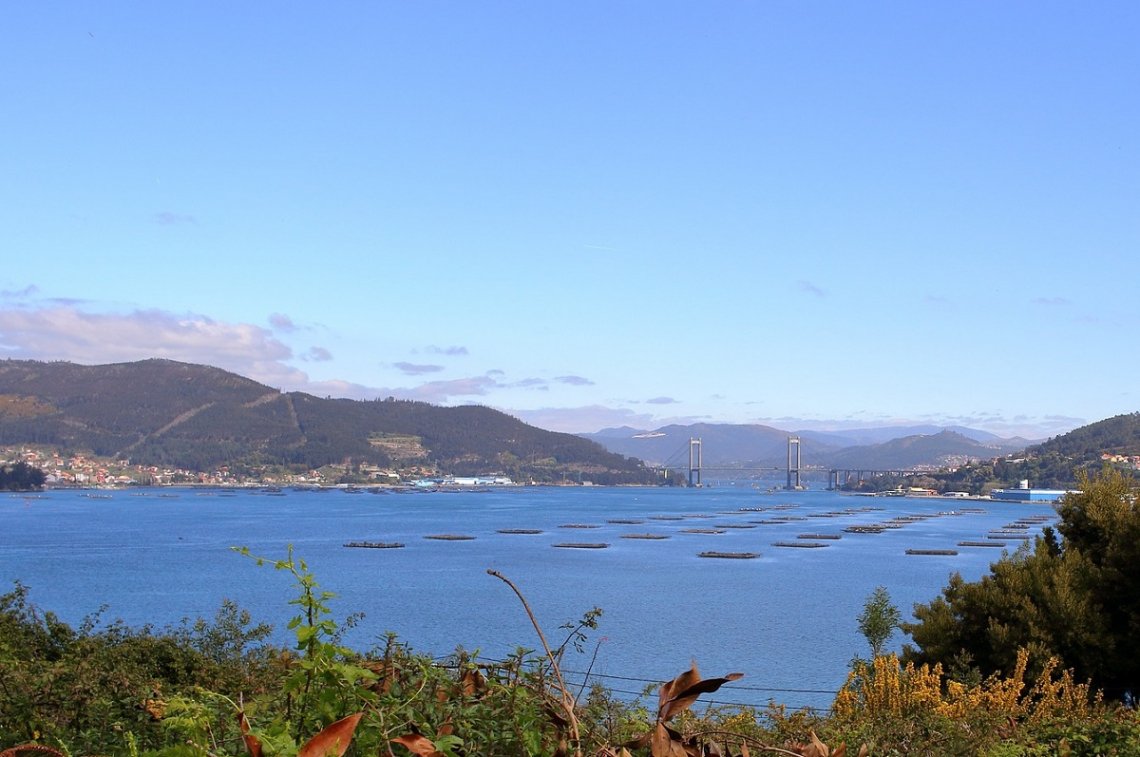 View of the Ria De Vigo in Galicia. Photo: Pixabay

Where is the Rías Baixas?

The term Rías Baixas comes from the Galician language and means as much as "sunken river valleys". On the one hand, the name stands for four bays in the south-west of Galicia, which arose from flooded river valleys: from north to south the Ría de Muros, the Ría de Arousa, the Ría de Pontevera and the Ría de Vigo. The bays protrude far inland and are clearly visible on the map. The Rías Baixas range from Cape Finisterre to the Portuguese border. Major cities along the Rías Baixas are Vilagarcía de Arousa, Pontevedra and Vigo. But the name Rías Baixas also stands for the wine region, which is located in this part of Galicia. The wine terraces shape the landscape in many places and sometimes extend even to the coast. The best known wine from this region is the Albariño - a young, fresh white wine that you will get to know during our trip.

Autumn is the ideal time of year for our pleasure trip. Admittedly, you have to expect occasional rainfall and the average temperatures are around 12 - 20 degrees which means that it will be a bit cooler than in the south of the country. But since Galicia is a particularly mystical county that is strongly influenced by the Celts, you do not blame it for its harsher climate. On the contrary - it gives it even more mystery. Autumn in Galicia is also the time of the wine harvest, which is celebrated with many gourmet events. And thanks to its combination of wild nature, heavenly cuisine and exciting culture, our travel route is particularly attractive for all who travel by motorhome. The route leads through hilly, lush green landscapes, past romantic wine terraces and golden yellow bays on the roaring Atlantic coast as well as high up to special viewpoints and lively places. 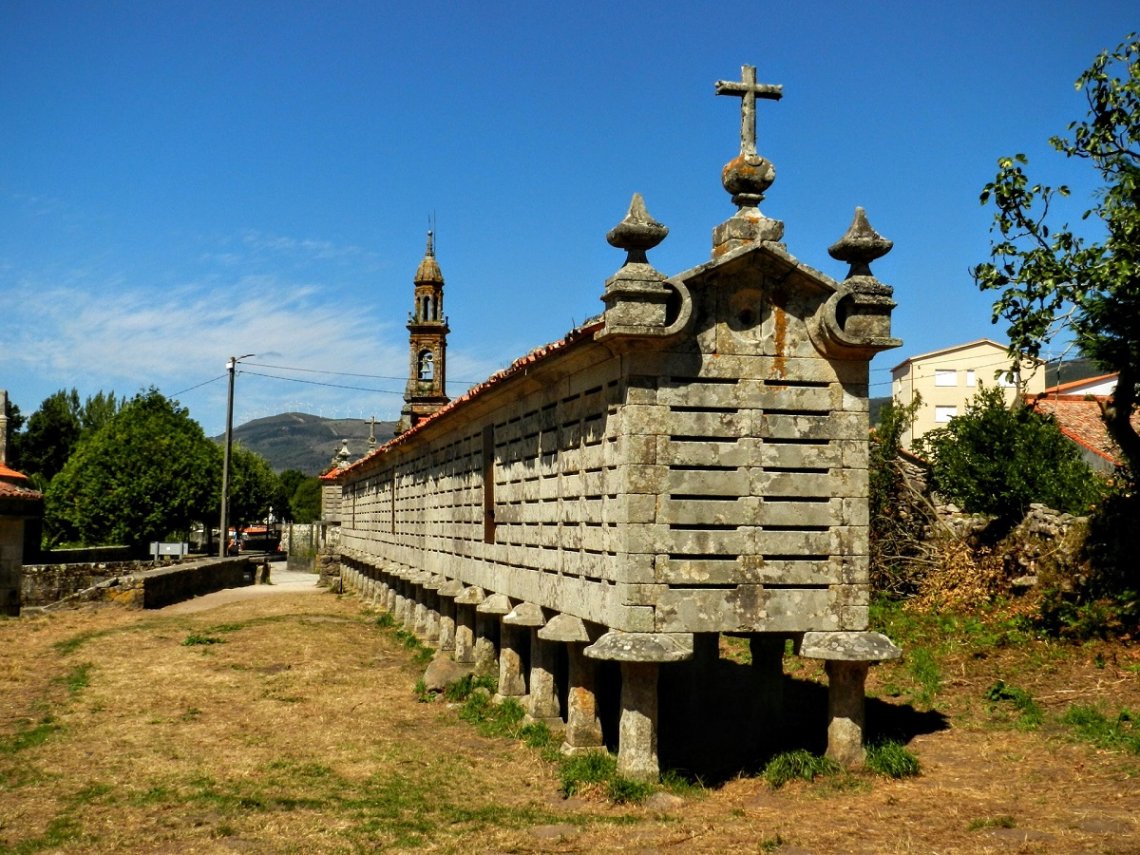 The Hórreo of Carnota is 35 m long and has been declared a National Historic Monument. Photo: Pixabay

Galicia is a county full of secrets, myths and legends. It is strongly influenced by the Celtic culture. Their heritage is reflected, for example, in the so called Hórreos. These stone granaries stand on stilts to protect them from moisture and vermin. Crosses and obelisks guard their rooftops to keep witches and evil spirits away. To protect yourself from bad influences, you should drink a Quemada every now and then in a Galician bar: This alcoholic drink is considered the magic potion of the Druids and is supposed to cleanse body and mind from all evil. And then of course there are the approximately 12,000 stone crucifixes in Galicia that are supposed to protect travelers. The Galician people are deeply connected to their culture - accordingly there is quite some truth in the saying: "The Galician may travel far, but they always return to their homeland." 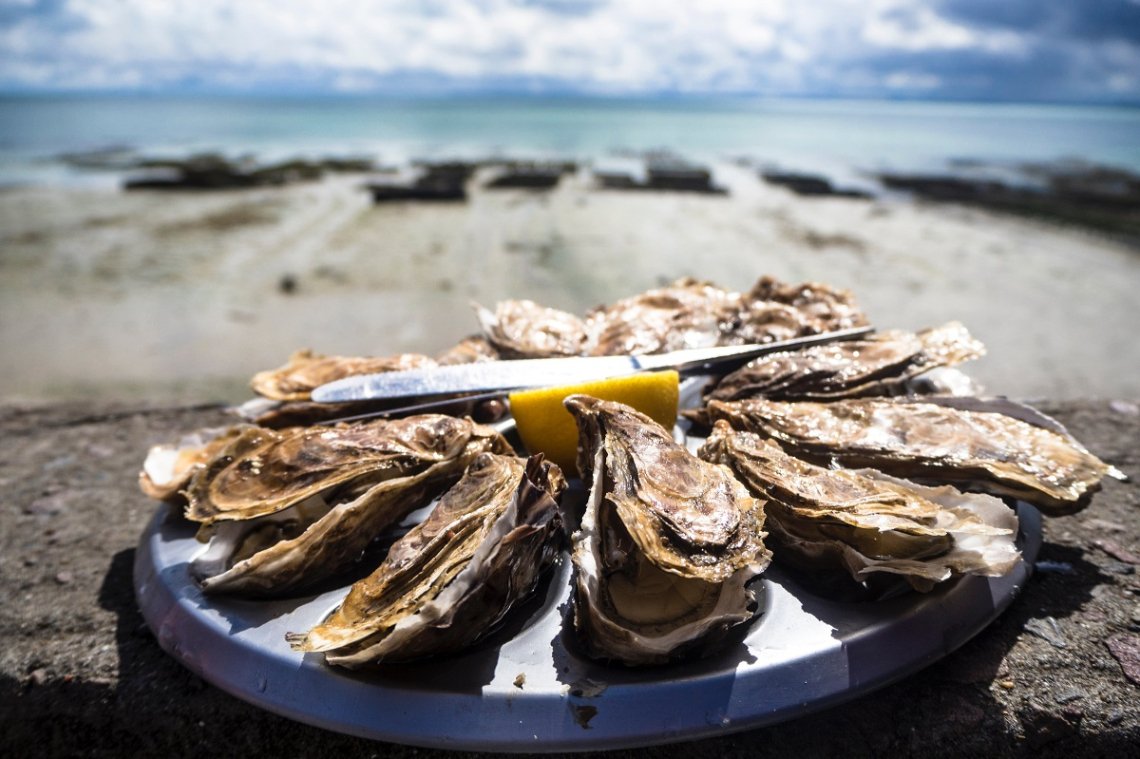 Galicia is one of the largest suppliers of oysters and other shellfish worldwide. Photo: Tommaso Cantelli / unsplash.com

Those who enjoy seafood specialties will love Galician cuisine: In addition to fresh fish from the Atlantic there usually also is fresh seafood and a large variety of mussels on offer. Oysters, mussels, scallops, the rare Goose barnacles or clams - there is a large selection. Maybe you even drive past rafts littered with mussels? Or you do pay a visit to one of the fish markets and marvel at the many different shellfish? Galicia is one of the largest mussel suppliers in the world. There is even a country-specific profession and this is practiced exclusively by women in Galicia: the Mariscadoras (in English this would roughly translate to "the mussel seekers") collect clams in the Rías Baixas in order to offer them as a delicacy on the markets. 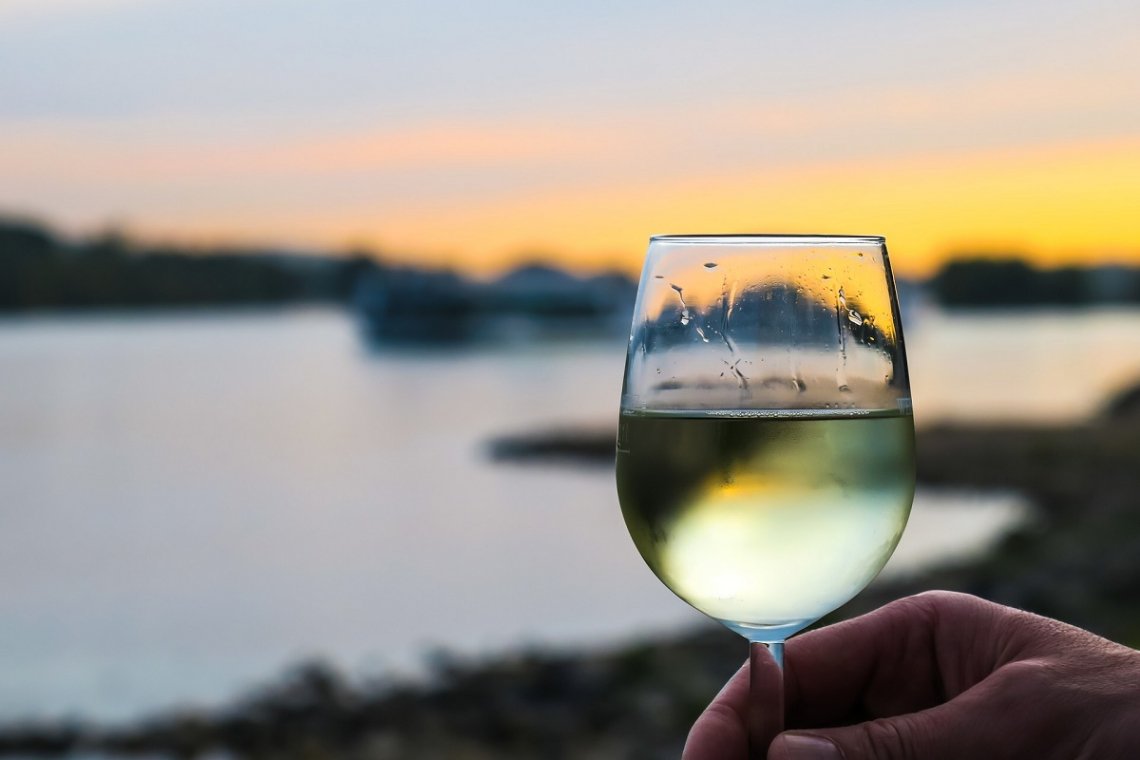 The Albariño is considered particularly fruity and fresh. Photo: Pixabay.com

And what goes better with a plate of fresh mussels than a glass of Albariño? This dry white wine surprises with its fruity-fresh note and fine nuances of green apple, citrus notes and peach. Its history dates back to the 12th century. Wine connoisseurs also refer to Albariño as the Spanish answer to the German Riesling. But it's not only in the rustic restaurants or on wineries you will have the opportunity to get to know Galician cuisine but you can also taste some specialties at one of the numerous public events. Popular are, for example, the seafood festival, which takes place every year in September in the port city of Vigo, or the festival in O´Grove, where every year in October everything revolves around delicacies from the sea.

Highlights and stops along the Rías Baixas wine route

Our wine route leads us from the legendary Cape Finisterre over the four Rías to Vigo just before the Portuguese border.

Before we go to the northernmost estuary of the Rías Baixas, we make a detour to Cape Finisterre, the westernmost tip of Europe. The Romans once thought that this place was "the end of the world" which is mirrored in the name that is derived from Finis Terrae, "End of the Earth". The Romans thought that evil dragons lurk beyond the horizon here. The stretch of coast between the Cape and Malpica is also called Costa da Morte - Coast of Death - because ships have repeatedly crashed here over the millennia. The Faro de Finisterra lighthouse sits enthroned on the Cape, from where you can enjoy the most fantastic view of the horizon. But don't be surprised to meet a lot of pilgrims here. Many of the pilgrims that have been hiking on the Way of St. James to Santiago de Compostela, also add the extension of the Camino Finisterre.

Further south you will find not only one of the most beautiful beaches, but also the longest sandy beach in Galicia: Praia de Carnota. Seven kilometers of brilliant white sand, turquoise water and an idyllic dune landscape characterize this fantastic place. For even more beautiful landscapes, a trip to Monte e Lagoa de Louro a little further south is worthwhile. From here you can see the lagoon de Louro, which is surrounded by dunes of fine shell sand. From here we travel on to the fishing town of Muros, whose weathered granite houses exude a special flair. A visit to the old town is a must, as is a stop at one of the many fish restaurants. Authentic restaurants can be found around the Praza de Curro, for example. Join the locals - they know where you will get the best food! By the way: On the other side of the Ría, an ancient Celtic settlement, the Castro de Baroña, protrudes spectacularly into the Atlantic. 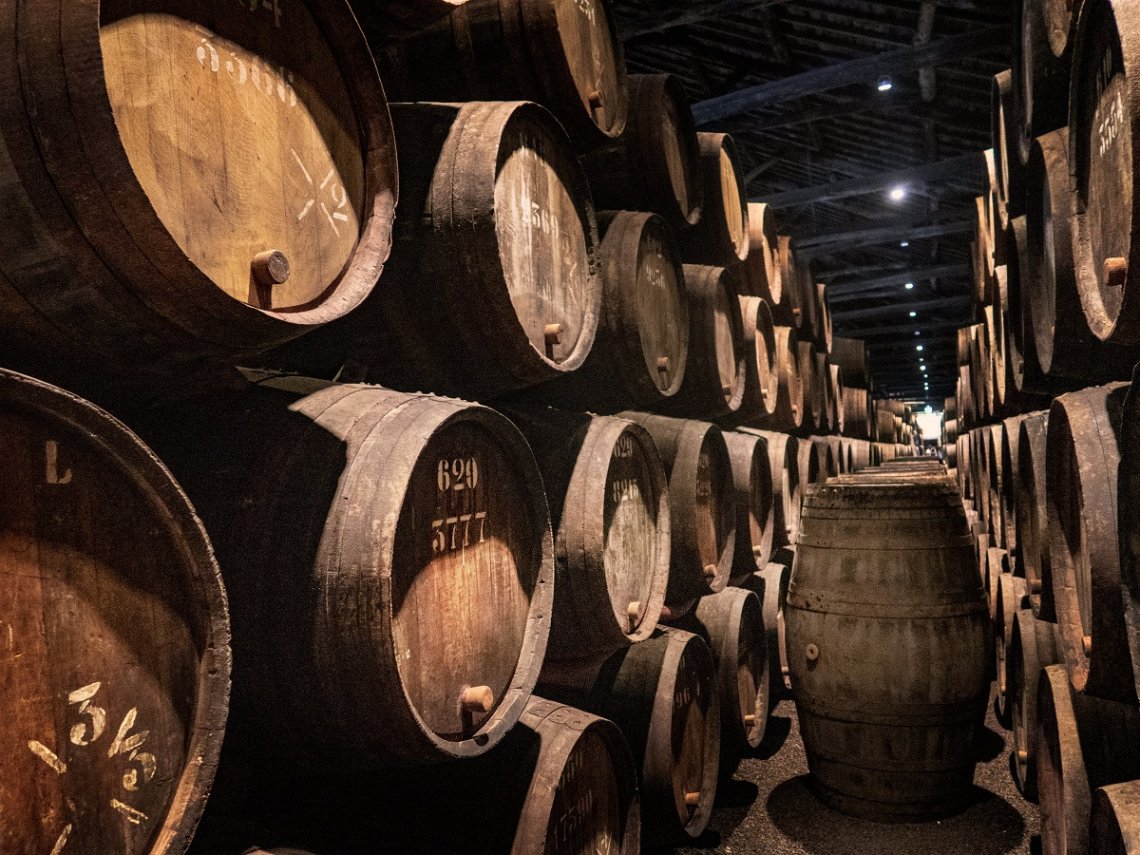 A visit to a pazo is a must on the wine route. Photo: Pixabay

The multifaceted estuary Ría de Arousa invites you to get to know the origin of the Albariño. There are several pazos in the Rías Baixas, which are Galician wineries where the wine is made. Here you can have a taste of the fruity-fresh drop directly from the producer. Good addresses are, for example, Pazo de Fefiñáns and Pazo de Rubianes. In addition to the traditional wine cellars and the beautiful landscape, the latter also offers an extensive botanical garden in which beautiful camellias grow. This pretty plant was once imported from East Asia and thrives so well on Galician soil that there is even a camellia road which leads through the county and guides visitors to the most beautiful camellia gardens.

6 days of pleasure trip with the motorhome through Spain - our suggested route for a motorhome tour in autumn along the Rías Baixas wine route.

6 days of pleasure trip with the motorhome through Spain - our suggested route for a motorhome tour in autumn along the Rías Baixas wine route.

Probably the most beautiful town in the Ría de Arousa is Cambados. In 2017, the place was recognized as the European Wine Capital. Dreamy bodegas (wine cellars) and cozy restaurants are lined up here. In the wine museum there is a lot to learn about the history of winemaking and from the esplanade in the harbor you can even see the O'Grove peninsula. On that island at San Vicente do Mar you have the opportunity to take walks on wooden footbridges that run for kilometers along the paradiselike coastal landscape. 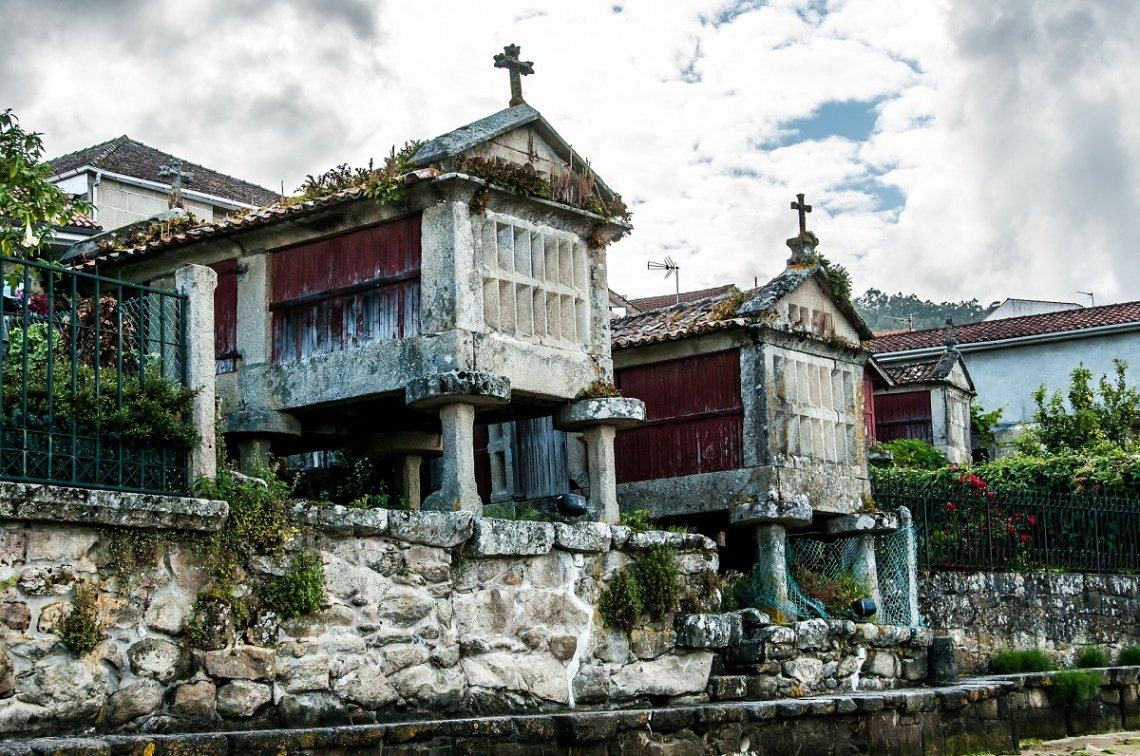 A special feature in Cambarro: Many hórreos were built next to the houses by the sea. Photo: Pixabay

Ría de Pontevedra: a visit to the city of pedestrians and a medieval fishing village

The bustling town of Pontevedra is located in the center of the Ría de Pontevedra. Here, the lively bustle in the harbor contrasts the trafficless city center: Pontevedra is also called the city without cars, as these have almost completely disappeared from the city. Pontevedra belongs to pedestrians and they can enjoy the picturesque buildings from the Renaissance, Baroque and Gothic periods all the better. The best way to park your motorhome is outside the city center and use public transport. The Praza da Verdura and the Praza da Leña promise a number of good restaurants where you are spoiled for choice between Galician specialties. The Eirado da Leña restaurant even has a Michelin recommendation. You should also visit the idyllic and dreamy village of Combarro, which is known for its traditional hórreos. With its crosses and obelisks the granaries give the place a truely medieval atmosphere. 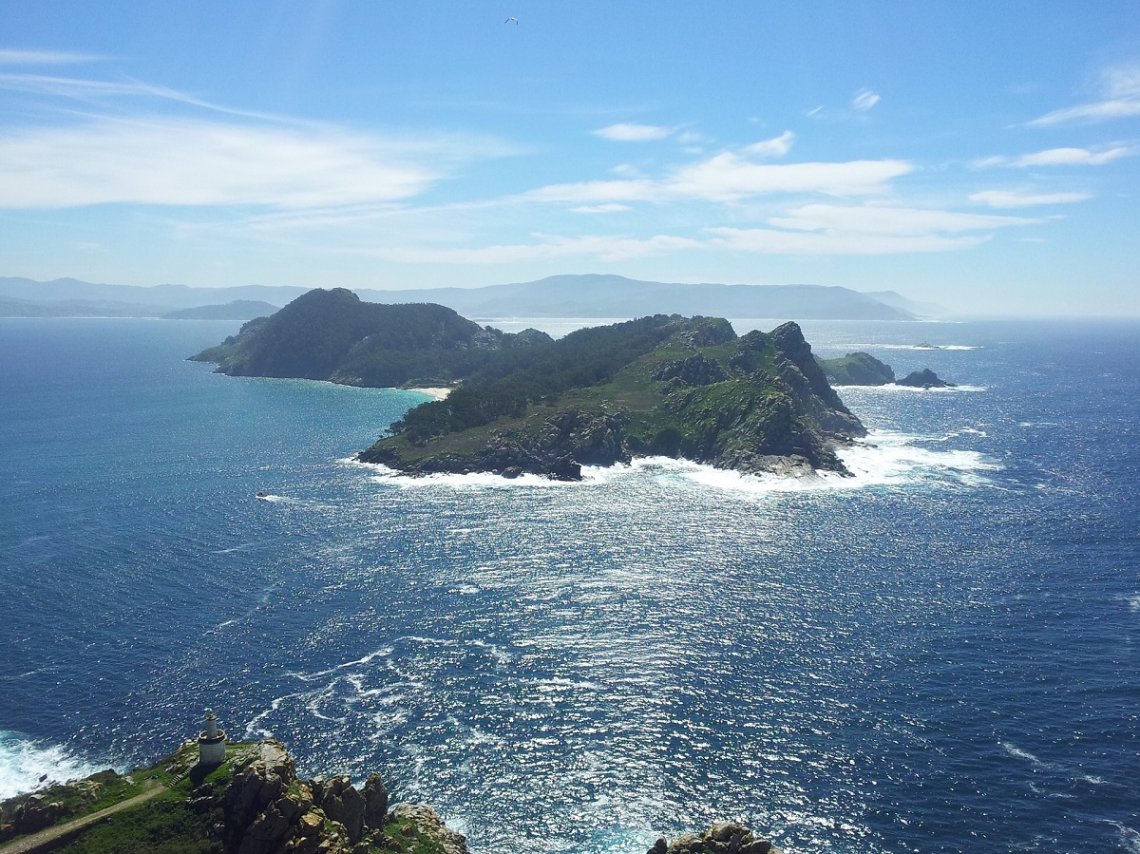 The Cíes Islands are located in front of the Vigo estuary. Photo: Pixabay

The Ría de Vigo is the smallest estuary in the Rías Baixas. Its cultural highlight is the port city of Vigo, the largest city in Galicia. And here there are many secrets to discover: Jules Vernes, for example, tells in his novel "2000 miles under the sea" that the best kept secret of the Nautilus is hidden in Vigo. In fact, there are still undiscovered treasures on the coast of the city that have sunk in the hustle and bustle of the naval battle near Vigo. The treasures of today's Vigo are undoubtedly its wonderful old town, the beautiful gardens in Parque Castrelo, the beach Samil and the hill Monte do Castro, on which a proud castle once was built and which guarantees a spectacular view of the city. Vigo's modern face is shown by artistic sculptures and street art.

In fine weather conditions, you should also consider a boat tour to the Cies Islands, which just as well could be located in the Caribbean: white sand and turquoise water surround green overgrown rocks that protrude gracefully from the sea. If you want to see the entire Ría de Vigo, you can experience this from the Costa da Vela on the approximately three-hour circular hike Roteiro de Donón. On this tour you will encounter a Celtic settlement on Monte o Facho, a lighthouse at Cabo do Home and fine sandy beaches such as Praia da Barra.

Camping along the Rías Baixas

There are numerous campsites along the Galician coast. And while the east coast of Spain is very lively and full of tourists, you will find many much quieter places and pitches here. Below you will find a selection of campsites in Galicia.