As there are over 400 castles in the Loire Valley, each with its own unique story, it seems a bit presumptuous to select only a handful of them. However, it is worth a try when compiling your first motorhome tour of the Loire Valley. In our opinion, these are the five castles that you should under no circumstances miss during a camping holiday in France: 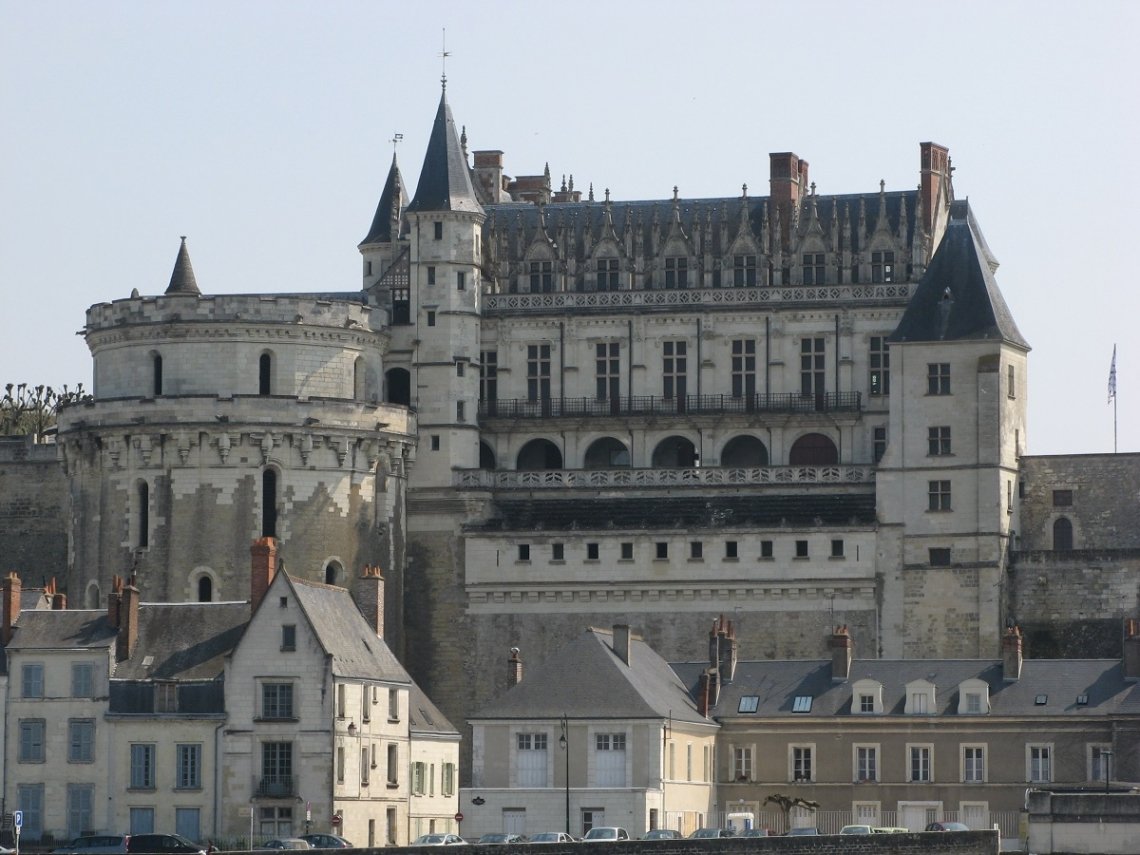 Château Amboise: A panoramic view of the Loire Valley

Château Amboise gracefully watches over the pretty little town of the same name, nestled on bank of the Loire. It is considered to be one of the most historically important castles of the Val de Loire with many of the French royal families taking up residence within the mighty castle walls over the years. These included King Francis I, who enjoyed a close friendship with Leonardo da Vinci. The friends were involved in the expansion of Château Amboise. Besides the magnificent palace, it is worth taking a look at the incredible gardens – established in the year 1495, they were the first Renaissance gardens in France. This royal palace during the Renaissance period was at the heart of the anniversary celebrations to commemorate 500 years since the death of Leonardo da Vinci (1519 - 2019).

Practical information:
Château Amboise is open daily throughout the year except for 25th December and 1st January. There is parking (free and charged) very close to Château Amboise, however this is only suitable for cars. If you arrive with a motorhome or caravan then you should use the car park at Château du Clos Lucé, which is only 600 m away and has designated motorhome/caravan parking. Or you can check into the campsite Camping Municipal de l'Ile d'Or, which is situated on a little island in the Loire, directly opposite Château Amboise. Panoramic view included.

A camping holiday in the Loire valley

Almost 600 m from Château Amboise stands Château du Clos Lucé, which was the childhood home of King Francis I. In 1516, he invited his friend Leonardo da Vinci to live and work in the palace. With the three famous oil paintings in his bag – the Mona Lisa, St John the Baptist and The Virgin and Child with St Anna – da Vinci made himself at home here. And especially practical: Château Amboise and Château du Clos Lucé where connected at that time by secret tunnels, meaning the King could visit his learned friend da Vinci any time he liked. However, Château du Clos Lucé would become the last place of work for Leonardo da Vinci: In May 1519, the universal genius died here at the age of 67.

So it is no wonder that the work and life of Leonardo da Vinci play a vital role in this palace, that has undergone extensive renovation work over the last 60 years. This has included a true to the original and only recently completed reconstruction of Leonardo da Vinci’s studio and a collection of the Master’s elaborate machines in the palace grounds. 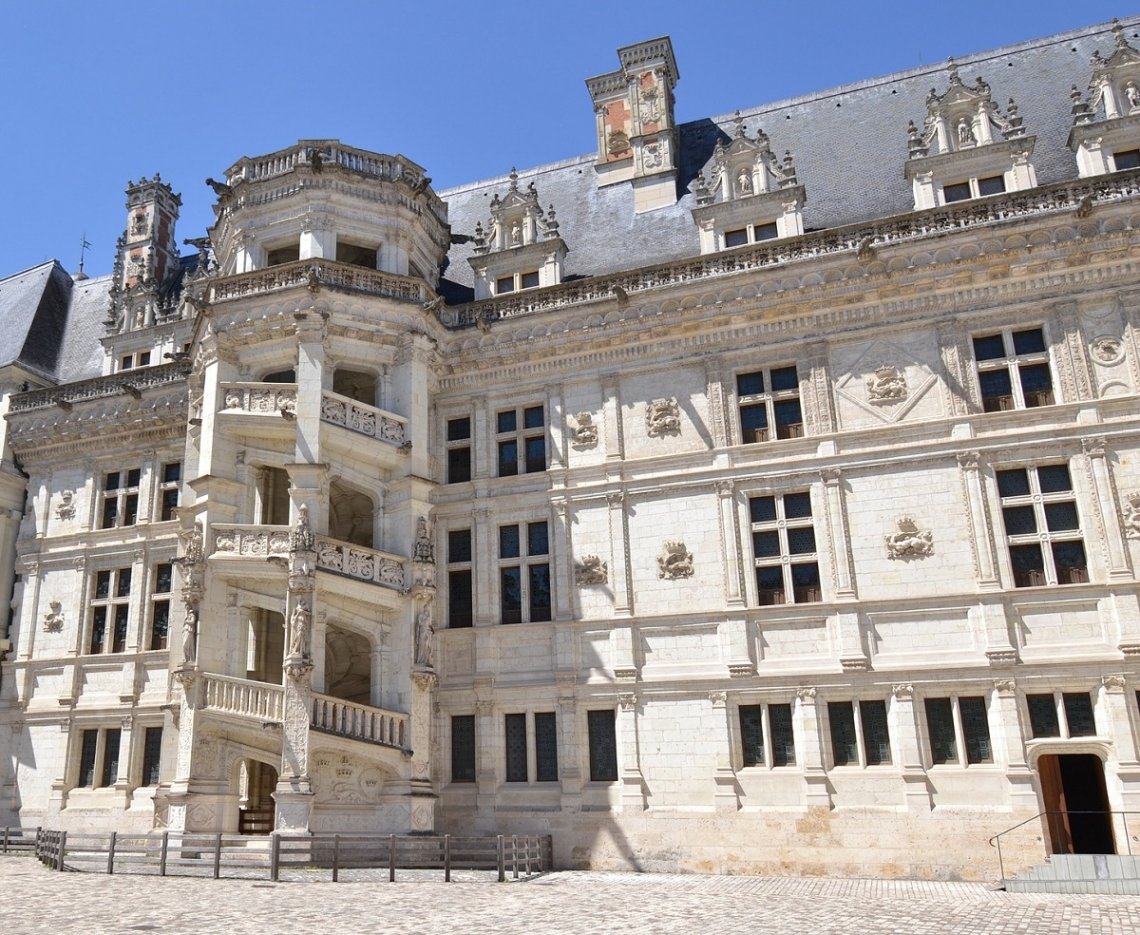 An important piece of French history took place in the Royal Château of Blois in the Loire Valley. Photo: Pixabay

Royal Château of Blois: From the Loire Valley fortress to a luxurious castle

On the northeast bank of the Loire is the city of Blois, home to a castle bearing its name. The Château of Blois has a very special history, having been home to ten queens and seven kings throughout the centuries. It is one of the most famous Loire châteaux, which does not mean that you can give it a miss. On the contrary: The museum château is a true trip back in time, into the pompous era of the Renaissance. The palace was painstakingly restored and houses an impressive collection of artwork and exclusive furnishings. Additionally, you can follow its incredible evolution through the years, from a defiant fortress to a luxurious castle.

Practical information:
The Château of Blois can be found in the old town, among narrow passages and one-way streets. This means it’s advisable for campers with a motorhome to find a space in the car park Quai du Foix or Port de la Creusille on one of the larger streets, and then take a walk to the château (approx. 10 to 15 min.). For those travelling with a caravan, we recommend the campsite Val de Blois, with lies directly on the banks of the Loire. 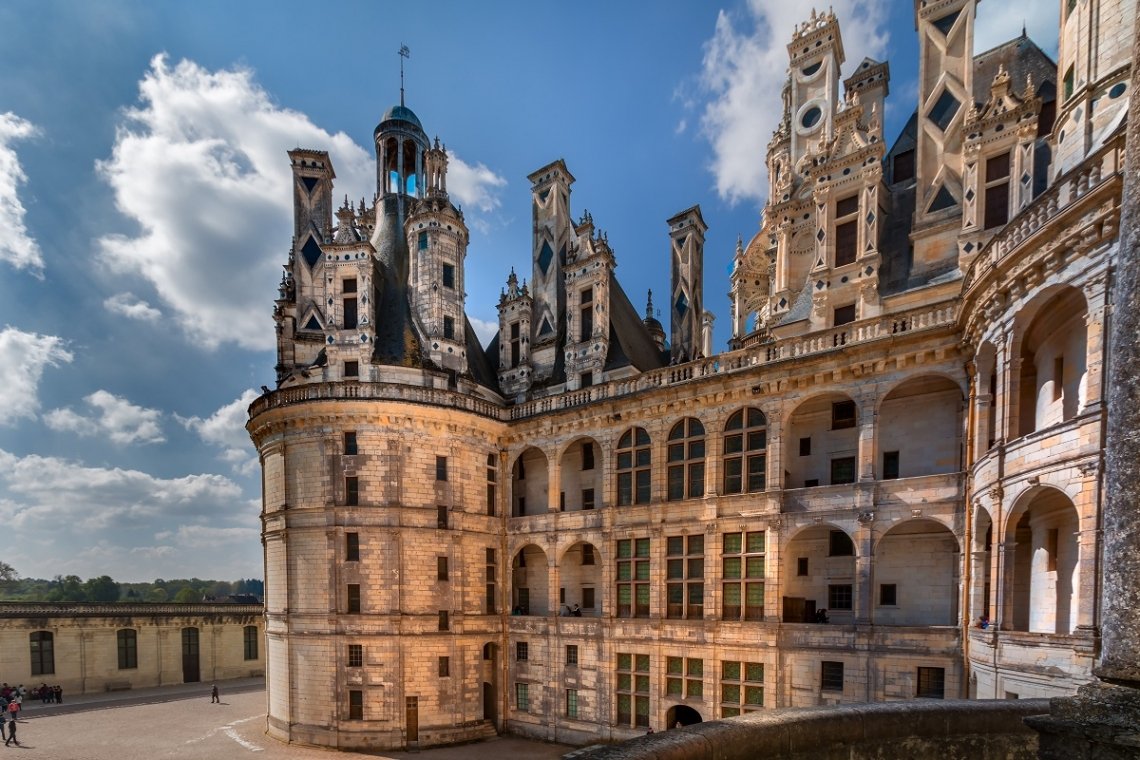 The roof architecture of Château Chambord is not only unusual in the Loire Valley.
Photo: Pixabay

Château Chambord: The largest castle in the Loire Valley

Now we come to the largest castle in the Loire Valley: Château Chambord, with over 400 rooms and a lordly 282 chimneys. When its construction began in 1519 during the Renaissance period, this castle was designed with a purely practical purpose and was only supposed to be used as a hunting lodge. However, it somehow turned into a monumental building, demonstrating power and grandeur. Leonardo da Vinci was also involved in this castle as an artist and architect: The design of the famous double helix staircase is attributed to him and is truly an astounding work of art. The design allows two people to ascend or descend simultaneously, seeing each other but without ever encountering each other. How does that work? You need to find that out for yourself during your visit to Château Chambord...

Other aspects also set Château Chambord apart from the other Renaissance castles in the Loire Valley: While the symmetrical design of the building clearly reflects the Renaissance style, the slate roofing and the flamboyant mass of pinnacles poses a distinct late Gothic contrast. The form of this asymmetrical and unusually opulent and diverse roofscape is almost unique. Also be sure to visit the formal French château gardens, stretching over six-and-a-half hectares at the foot of the château. These were reconstructed as late as 2017 using plans dating from the 18th century.

Practical information:
If you are travelling to Château Chambord with a motorhome, you should use car park P2. It is approximately 1 km from the château, but the walk to the castle gives you the opportunity to admire the whole architectural grandeur of this immense structure. Motorhomes and caravans can stay for 24 hours for 11 Euros. Those arriving by car can use car park P1, which is a bit closer to the castle and costs 6 Euros per day. 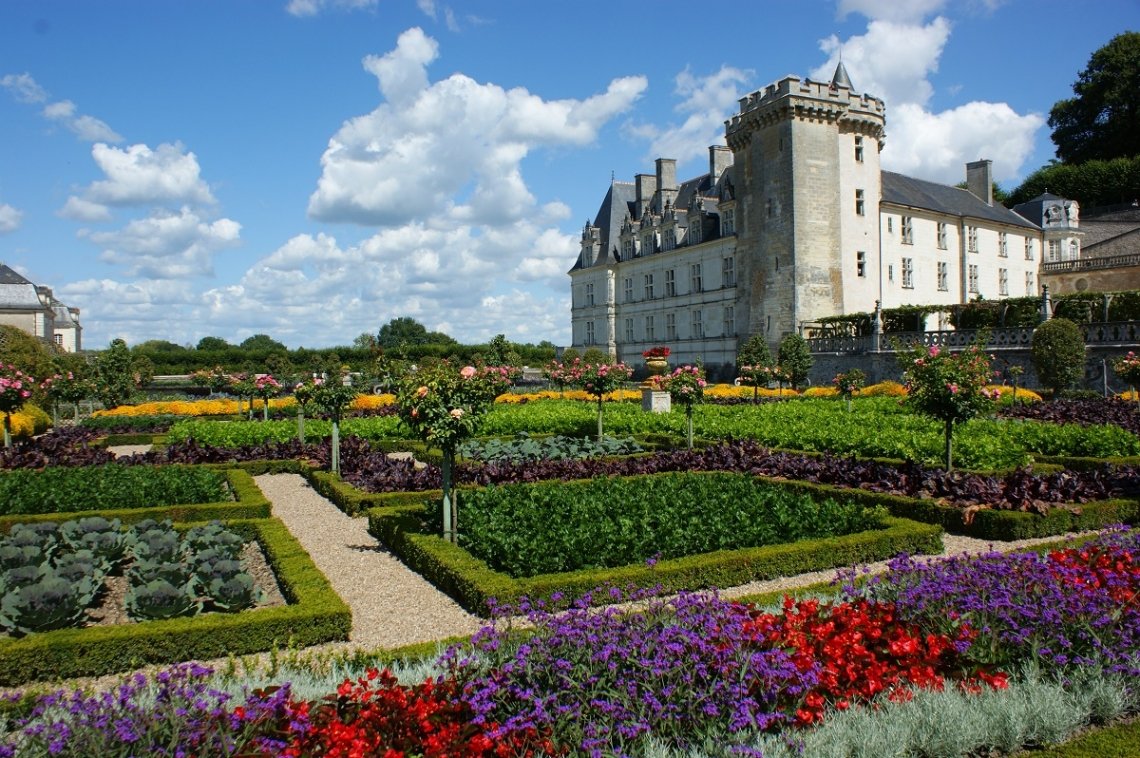 The vegetable garden is the show-piece of Château de Villandry in the Loire Valley. Photo: Pixabay

Château de Villandry: The most beautiful vegetable garden in the Loire Valley

Château de Villandry was the last great Renaissance château to be built in the Loire Valley. Unlike at Château Chambord, the architecture is not the centre point here, but rather the landscape gardening. The Renaissance garden, laid out in terraces, harmonises perfectly with the tuft château façade. The decorative vegetable garden is made up of nine large, equally-sized square beds, and is the real jewel in the crown of Villandry. A trip to view these astonishingly beautiful vegetable beds may sound a little crazy to some, but once you have seen the gardens of Villandry, you’ll change your mind completely. The flower and vegetable beds are laid out according to the laws of geometry and symbolism, and are at the same time a botanical sensation. In places, the gardens are even reminiscent of those belonging to the Queen of Hearts in “Alice in Wonderland”. The gardens of Château de Villandry are an absolute must for gardening enthusiasts and connoisseurs of art and beauty!

Practical information:
A pitch for up to 35 motorhomes/caravans is available approximately 500 m from Château de Villandry at Aire Camping Car Park de Villandry. You can park here for five hours at a cost of only 1 Euro. Overnighting between spring and autumn costs 12 Euros. Cars can park free of charge close to the château.