Back
Trip to Mont-Saint-Michel

Motorhome trip to Mont-Saint-Michel, an island with an abbey at its summit, in Normandy, France – tips on tides, parking as well as campsites and pitches 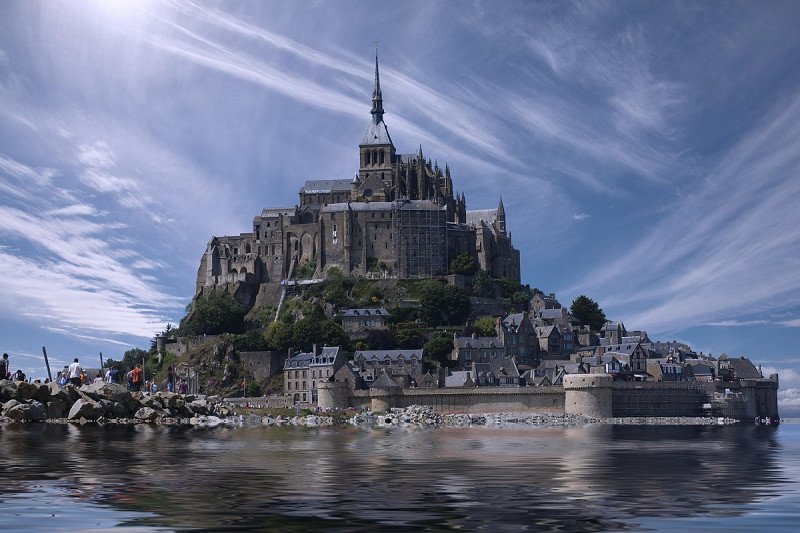 Motorhome trip to Mont-Saint-Michel, an island with an abbey at its summit, in Normandy, France – tips on tides, parking as well as campsites and pitches

Not really an insider tip, but if you're going on a camping holiday or a motorhome trip to Normandy or Brittany, stopping over at the world-famous Mont-Saint-Michel is simply a must. Freeontour has put together some key facts about this UNESCO World Heritage Site along with tips on tide times, parking as well as campsites and pitches nearby. 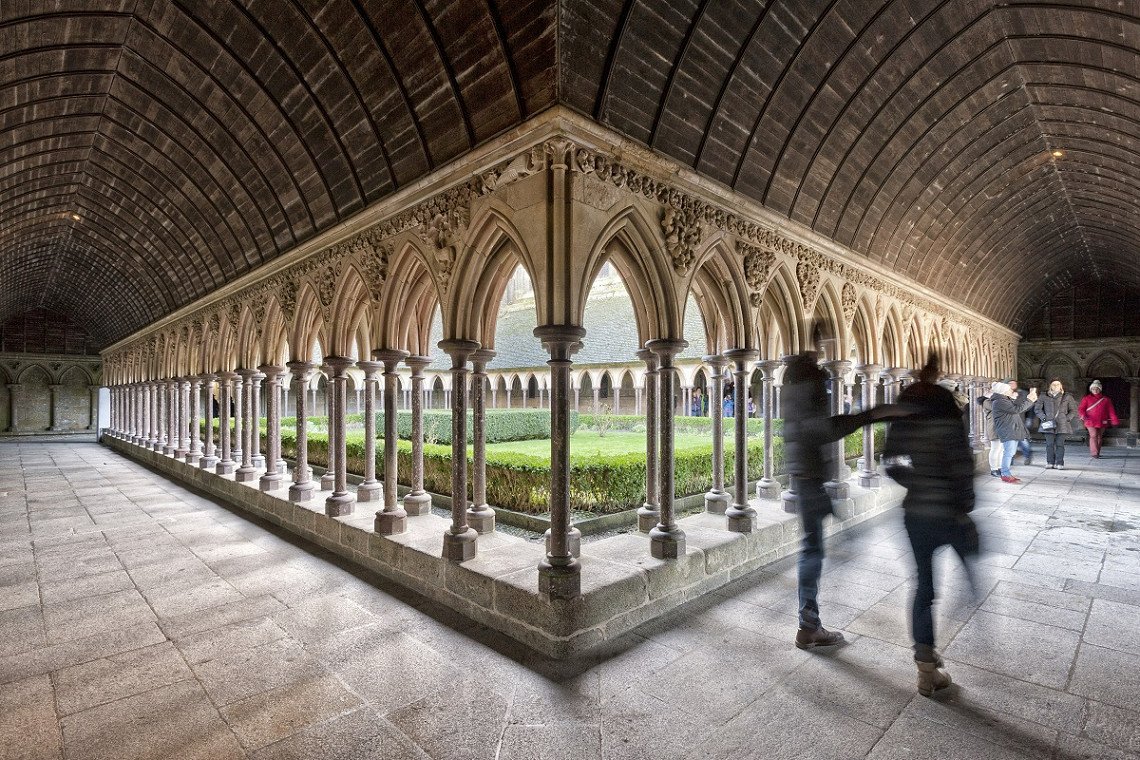 The Benedictine abbey on Mont-Saint-Michel is an exceptional example of medieval religious and military architecture. Photo: Atout France / Marc Lerouge

What is there to see at Mont-Saint-Michel?

Mont-Saint-Michel is full of cultural, historical and architectural highlights. This tidal island is known for its abbey, which was home to Benedictine monks until the 1960s. Despite its small size, there is a lot worth seeing here, such as the abbey's gardens; the Musée Grévin with waxworks showing the history of the abbey; the Archéoscope multimedia show; Bertrand Du Guesclin's house – Logis Tiphaine – with décor, furniture and carpets from the 14th century as well as a collection of rare objects; the Mont-Saint-Michel salt-meadow lamb; the Granville rocky promontory; the writings of the monks; and famous copper craftsmanship. Moreover, visitors can enjoy events held here throughout the year. 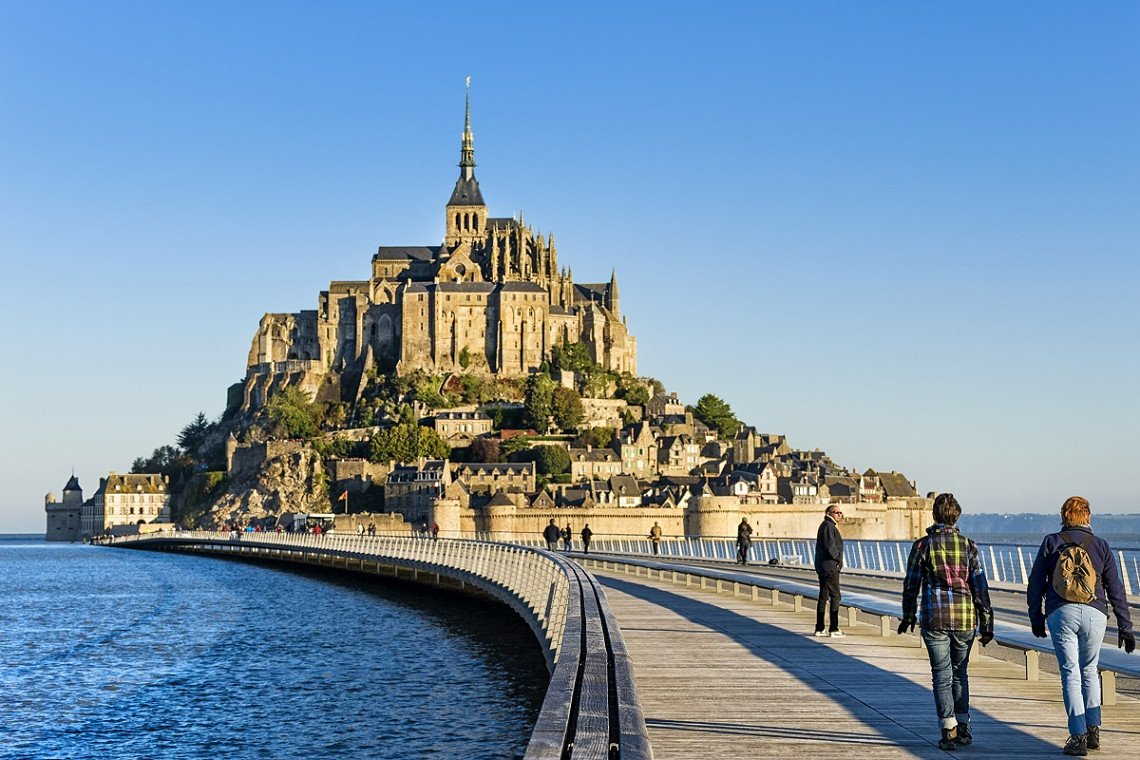 A footbridge allows access to Mont-Saint-Michel all year round, regardless of how high the tide is. Photo: Atout France / Marc Lerouge

What makes Mont-Saint-Michel so special?

But the main reason why more than 3.5 million people are drawn here every year and why Mont-Saint-Michel is the tourist magnet par excellence in Normandy is its unique geographical location. Mont-Saint-Michel is located on a rocky islet just off the Normandy coast, in a bay that has the strongest tides and the largest tidal range in all of Europe. The sea retreats up to 15 km at low tide and the island is sometimes completely surrounded by the sea at high tide – a fascinating natural spectacle and photo motif. To ensure you can enjoy both from different angles and with dry feet, you can use the footbridge to the Mont-Saint-Michel World Heritage Site all year round – apart from a few days a year. Because when the tidal coefficient is above 100 or 110, the high tide not only surrounds the island, it also temporarily submerges the lower part of the bridge to the island. It's on days like this that Mont-Saint-Michel returns to its original island status, just like it was in the old days.

Before the new bridge was opened in 2015, the island had been in danger of slowly silting up. To prevent this, the former causeway and its car park were removed and replaced by the 760 m long footbridge, with the new car park being moved to the mainland, and a dam was built at the mouth of the Couesnon River. 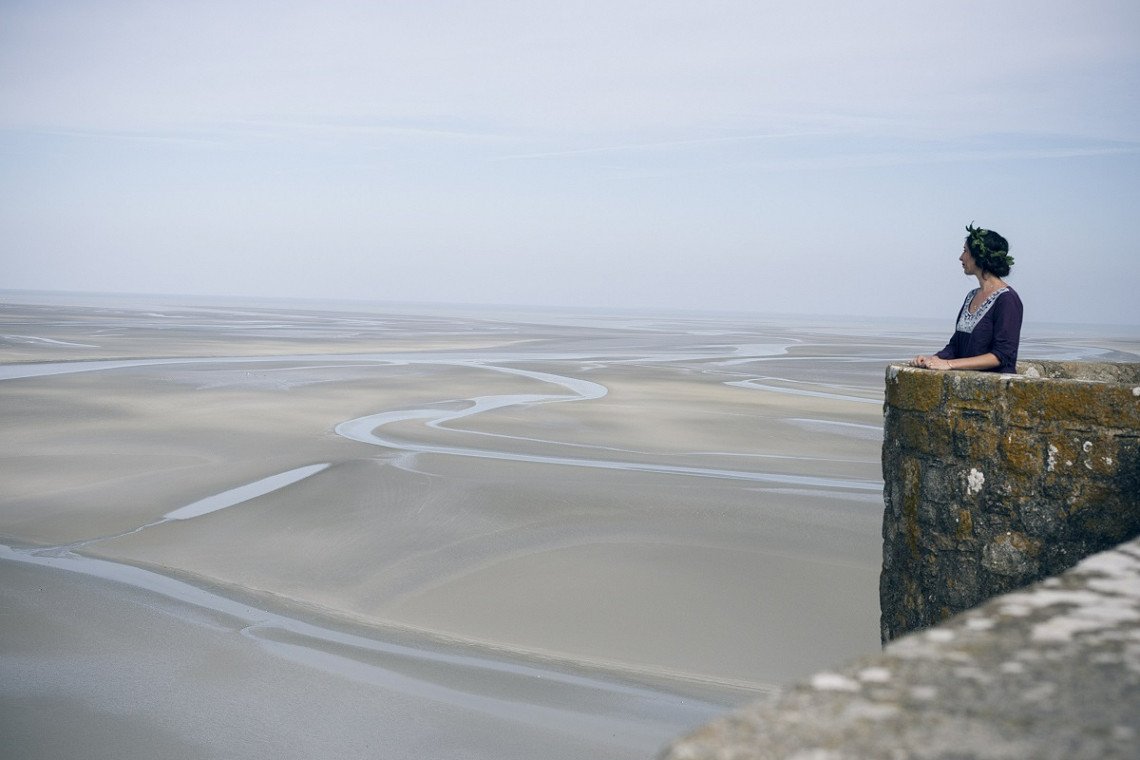 The ramparts of Mont-Saint-Michel are a good vantage point to watch the approaching tide in the bay. Photo: Atout France / Nathalie Baetens

When and where can you observe the tidal range at Mont-Saint-Michel?

If you want to experience nature at Mont-Saint-Michel, it doesn't get any more spectacular than the incoming tide. Plan plenty of time, you should ideally be at your observation point two hours before the tide reaches its peak – whether on the island or the mainland. The best and most popular vantage points on the island are the terraces of the abbey and the ramparts. You can also watch the approaching tide from the footbridge. Moreover, the bay of Mont-Saint-Michel also offers some great vantage points, such as La Roche Torin, Courtils, Le Grouin du Sud in Vains-Saint-Léonard and Le Gué de l'Epine in Val-Saint-Père.

The tide is particularly beautiful and dynamic about 36 to 48 hours after a full moon and new moon when the tidal coefficient is greater than 90. The coefficient is used predominantly in France and uses values between 20 and 120 to denote the difference between low and subsequent high water levels. Record levels are often seen around the equinoxes. When the coefficient reaches 110 or more, parts of the bridge are flooded. For campers planning a visit to Mont-Saint-Michel, you can take a look at the tidal forecast in Saint-Malo, which is mostly similar to the tides at Mont-Saint-Michel.

Spring tides at Mont-Saint-Michel in 2022

When the tide coefficient is 100 or 110, then it's a spring tide that occurs only a few days a year, which can also be influenced by the prevailing winds. For 2022, spring tides with a tidal coefficient above 100 are expected on the following dates: 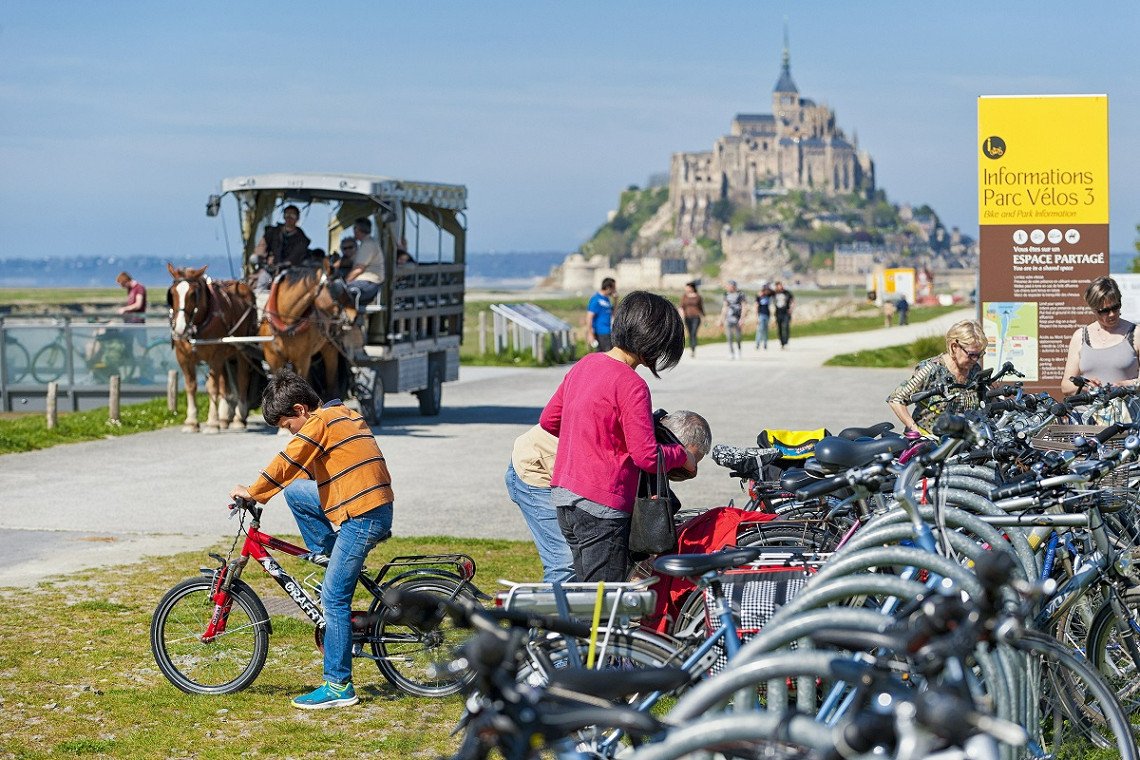 You can get close to Mont-Saint-Michel from the car park by bike, shuttle bus or horse-drawn carriage shuttle. Photo: Atout France / Marc Lerouge

How to get there by car or motorhome

After the bridge at Mont-Saint-Michel was reconstructed, the large parking spaces that had previously been on the causeway were moved to the mainland, about 2.5 km from the island. You can reach the new car park by car or motorhome by taking the A11 towards Le Mans – Laval, then exiting at Fougères towards Le Mont-Saint-Michel or via the A13 towards Caen and then the A84 towards Le Mont-Saint-Michel. You have to pay at the P8 car park for motorhomes, which is only accessible for vehicles up to 8 m long. However, larger motorhomes and car/caravan combinations will have to go to a campsite or caravan site. Incidentally, anyone planning on staying overnight at this car park needs to know that although you can park your motorhome here for 24 hours, you may not stay or sleep in it overnight and there is no electricity or fresh water connection. But there are several campsites and pitches in the vicinity – you can see a selection below. In light of the parking fees at Mont-Saint-Michel, this is quite a good alternative for campers who have also brought a bicycle with them. Some campsites also offer bus connections or a shuttle service. 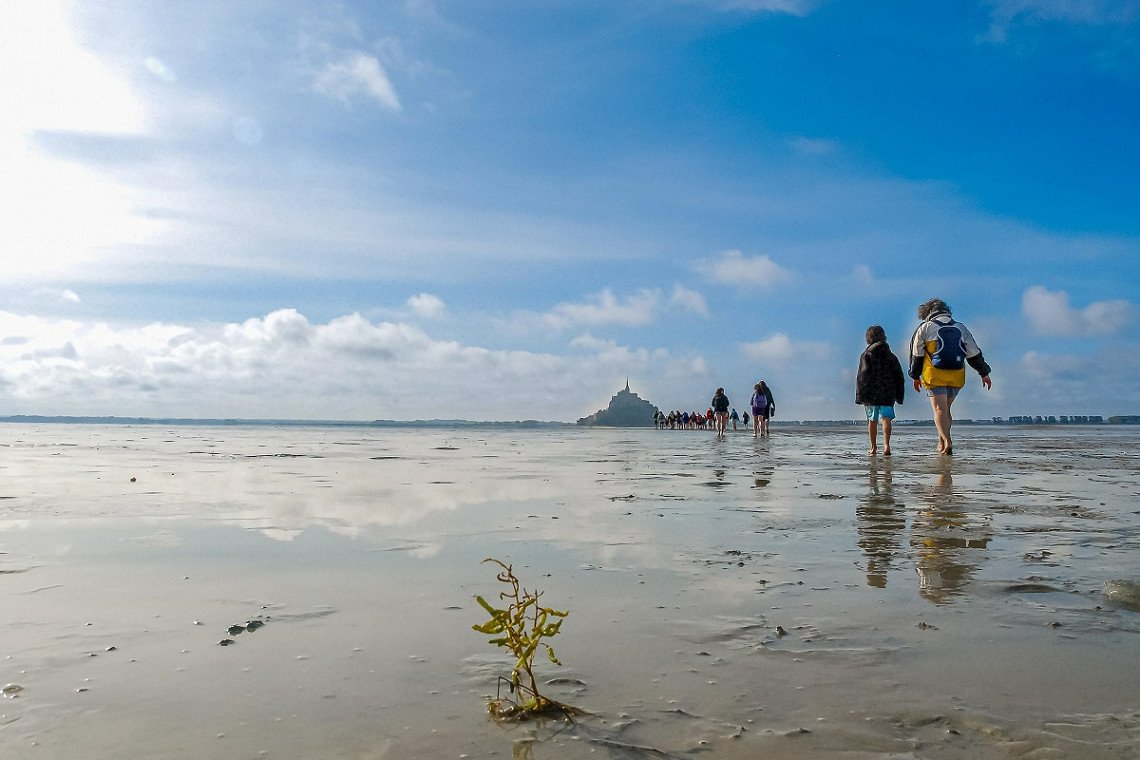 Depending on the tide, you can also join a guided walk across the mudflats to the island. Photo: Pixabay

There are several ways to get to Mont-Saint-Michel from the official car park. Most visitors use the paid shuttle service that starts just off the car park next to the Tourist Information Centre. The shuttle buses take the passengers up to 400 m from Mont-Saint-Michel, and you will have to walk the rest of the way. However, dogs are not allowed on the shuttle buses. Or you could go for a slightly more expensive option and take a horse-drawn carriage. If you're feeling active, you could cycle to the Mont-Saint-Michel bridge or walk the entire route. A great way to really soak up the atmosphere and the unique location of the island is by walking across the mudflats at low tide. However, we strongly recommend not doing this on your own, but instead joining an experienced mudflat guide. Due to the large tidal range in the bay of Mont-Saint-Michel, the tide comes in "like a galloping horse". Furthermore, there are numerous treacherous quicksand spots in the bay that can quickly become dangerous for the inexperienced. Here is an overview of certified mudflat guides at Mont-Saint-Michel.