Back
Tips for cross-country skiing in Switzerland

Tips for cross-country skiing in Switzerland

Cross-country skiing trails instead of lifts: easy gliding in these areas in Switzerland 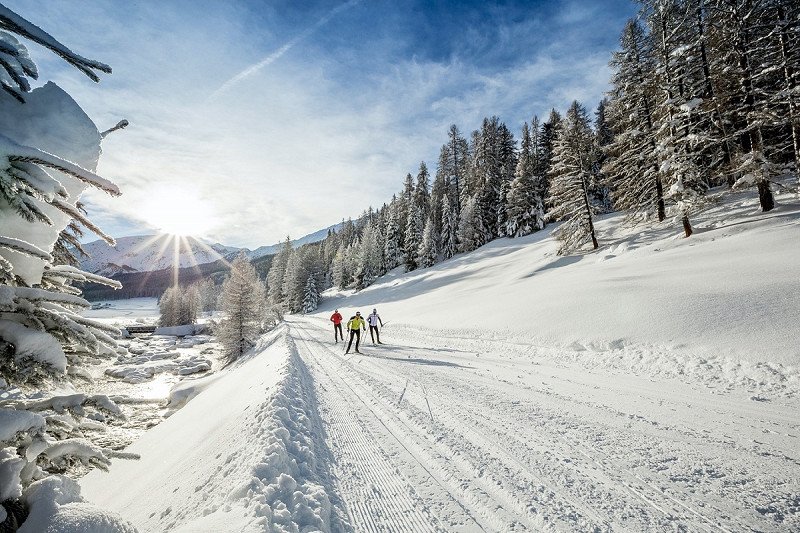 Tips for cross-country skiing in Switzerland

Cross-country skiing trails instead of lifts: easy gliding in these areas in Switzerland

Not everyone enjoys queuing for the ski lift. If you prefer your winter sports at a more leisurely pace, then take a look at Freeontour's tips for fantastic cross-country trails in Switzerland. You won't find any crowds here nor any ski lifts to disturb the panoramic view. Why not try it out later this winter or in the next winter season? 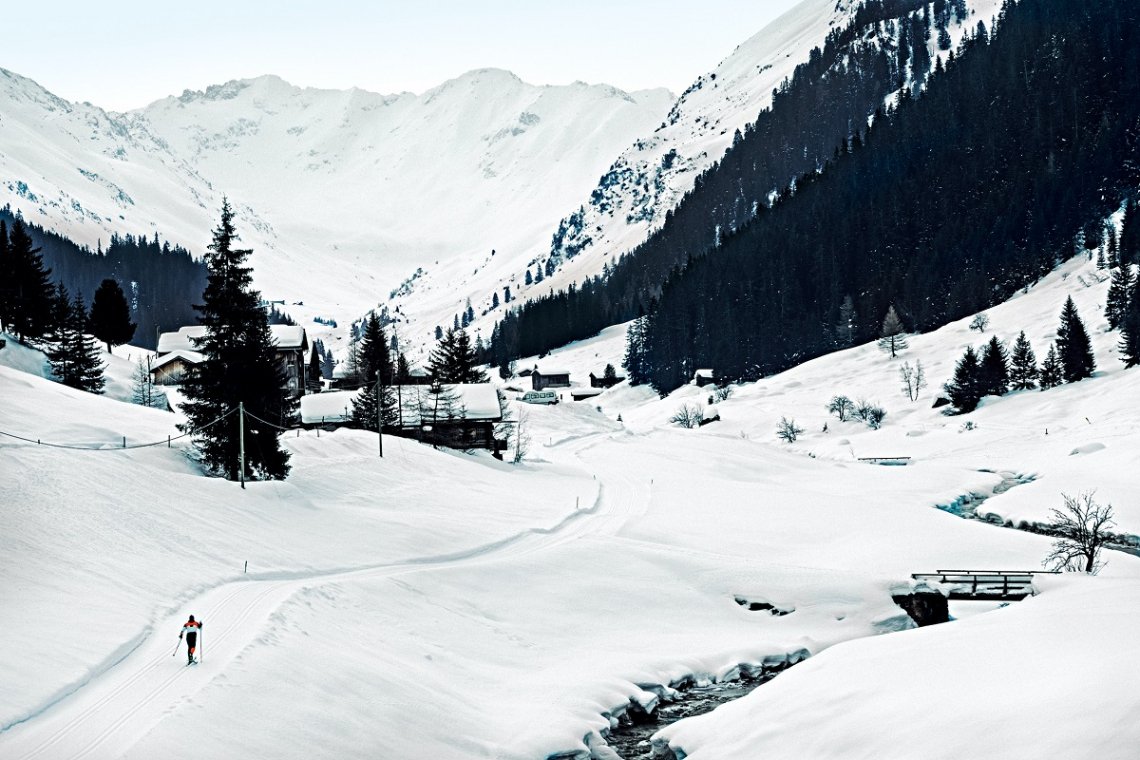 Along the Sertig river on cross-country skis through the wonderfully secluded Sertig Valley. Photo: Andrea Badrutt

From the hustle and bustle of a small town to the silence of nature: skiers can experience for themselves just how quickly this can happen while on the 15 km Sertig trail. The route starts in Davos, the highest city in Europe. The trail follows the wild Sertig river slightly uphill and runs past numerous Walser settlements as the valley gets wider and wider. You will reach the highest point of the tour at the Felabach stream after about six km. A gentle downward slope takes you past the small village of Sertig Dörfli with a small eye-catching mountain church. Snow-covered pine and larch forests tower above the mountainsides while numerous peaks form an impressive backdrop. The last few hundred metres of the trail run gently downhill to Sertig Sand where the tour ends. You can return to Davos by the same route – or take a postbus and ride back in comfort. 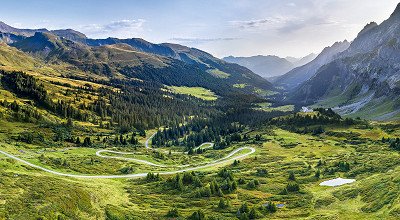 At a glance: travelling around Switzerland by caravan and motorhome

What you need to know for your trip to Switzerland: interesting facts, traffic rules and practical tips

Tip #2: Langnau trail in the Emmental Valley, Bern region, for beginners and families

The Emmental Valley is not only famous for its excellent cheese, but also for its picturesque cross-country ski tracks. The Langnau trail is nestled in a pristine hilly landscape and follows the Ilfis river for nine km. Impressive farmhouses are dotted along the route. The loop trail begins just outside the village of Langnau. With the exception of a small hump near Ramsern, the trail along the valley floor – wide by Emmental Valley standards – is almost entirely flat. The trail is ideal for beginners and families as there are hardly any steep inclines to overcome. Cross-country skiers can enjoy a very special treat at the turning point in Trubschachen: the biscuit manufacturer Kambly has a warehouse sale here from Monday to Saturday. 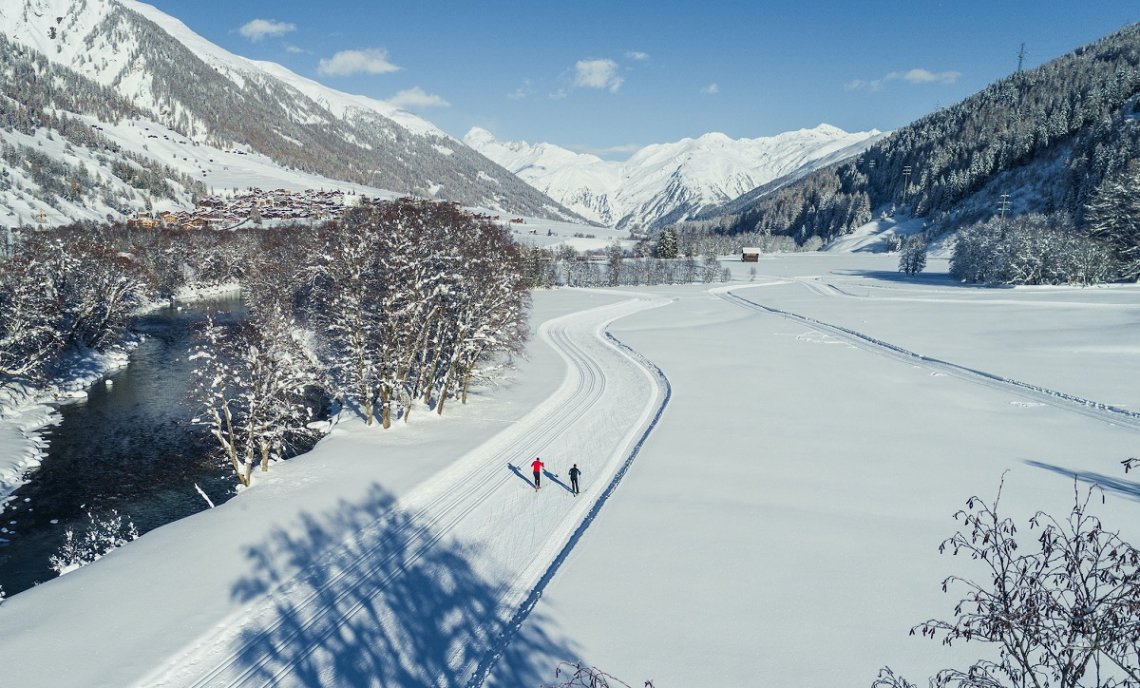 With an average altitude of 1,300 m, the landscape of the Goms high valley is breathtaking as well as snowsure, even in late winter. The varied Rotten trail runs from Oberwald to Niederwald, most of it following the Young Rhône river, which is still called Rotten here. The 18-kilometre route is very diverse, cutting through forests and across wide open fields. Since the trail is quite flat, it is ideal for casual cross-country skiers whose main aim is to enjoy the natural surroundings. Thanks to its high altitude, professionals also use the trail as a training course. If you don't feel like returning on skis, you can simply take the train. The Matterhorn Gotthard railway line, on which the Glacier Express also operates, runs parallel to the route.

This trail starts and ends at the Hôtel-Restaurant de la Grand'Borne, which is located half on Swiss and half on French territory. Along the way, cross-country skiers will be confronted with a fantastic view of Le Chasseron (1,600 m). The ten-kilometre-long Piste de la Grande Borne cross-country ski trail skirts the La Mouille de la Vraconnaz nature reserve, one of the last peat bogs in the canton of Vaud. This highly varied scenic route goes uphill and then downhill again through forests and pastures – and is perfect for recharging your batteries. 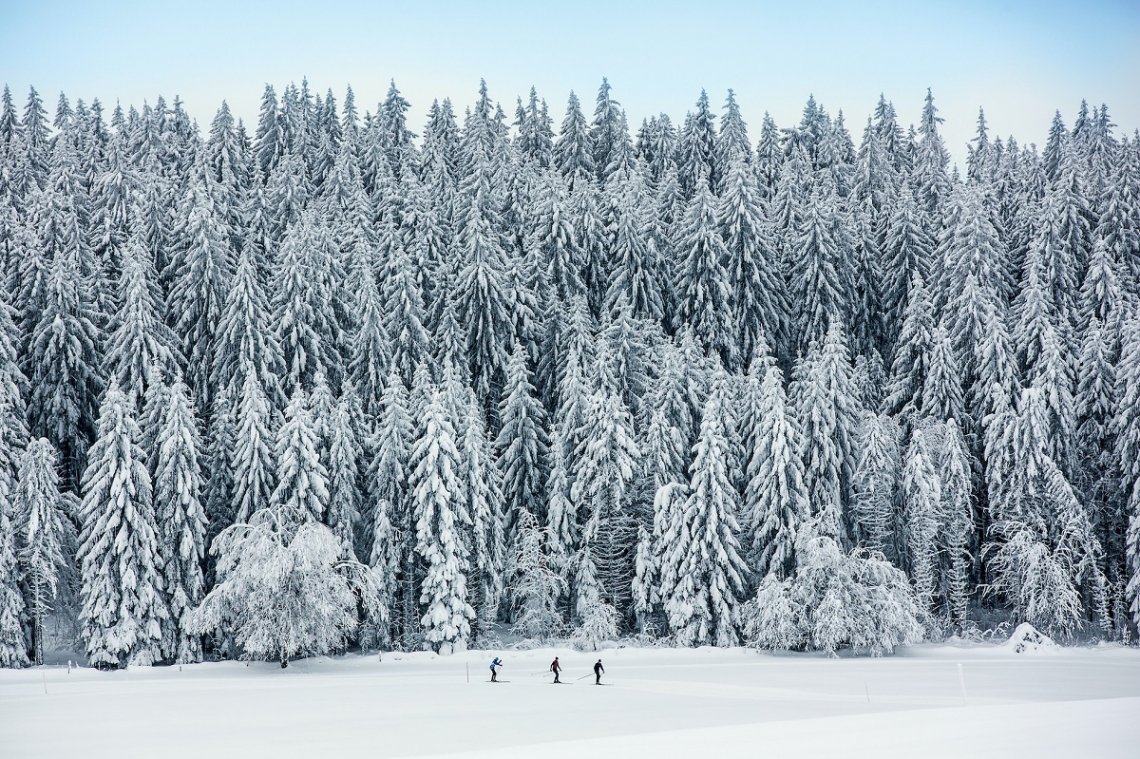 The Grande Boucle (Big Loop) trail runs for 46 km through unspoilt landscapes of the Franches-Montagnes district and the Doubs Nature Park. It starts in Les Breuleux, the region's cross-country skiing centre. The trail first heads in a westerly direction across pasturelands, then in slalom through snow-covered fir forests. The piste is practically flat all the way up to La Combe à la Biche where the route then gets slightly hillier towards the villages of Les Bois, Le Noirmont and Saignelégier. The landscape is more open here, but you are closer to civilisation. The section between Saignelégier and Le Cernil is winding and varied. The trail between Le Cernil and Les Breuleux runs through flat, exposed terrain – a paradise for cross-country skiers! After reaching the outskirts of Les Cerlatez, it is worth making a detour to the Etang de la Gruère lake, which may even be frozen over.

If you like it quiet, Val Müstair is the place for you. The valley behind the Ofen Pass is part of a UNESCO biosphere reserve and is home to just 1,500 residents. This includes cross-country skiing superstar Dario Cologna and his brother Gianluca. The challenging, nine-kilometre-long Val Müstair valley trail starts in Valchava. From Fuldera the trail runs through fir and larch forests, then across the plain of Palüds before continuing alongside the picturesque river Rom to Tschierv. Val Müstair has regularly hosted the Tour de Ski. For the toughest of skiers, the final leg of the Tour de Ski trail in Tschierv is the highlight to a perfect day of cross-country skiing.