Back
Camping in Ibiza 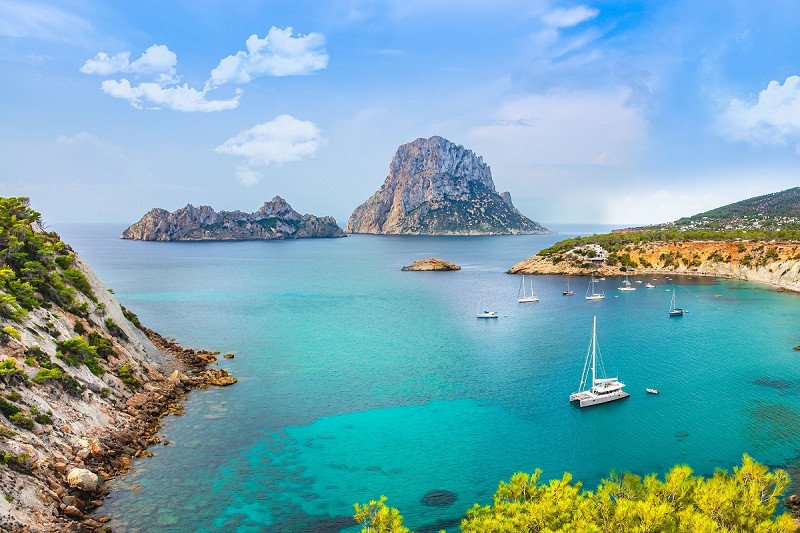 “Where or what are the Pityuses?” you might be wondering. This ancient Greek term means something like "pine islands" and refers to the two neighbouring islands of Ibiza and Formentera. Images of excessive partying may now come to mind, but this is only one of the many sides of these dreamy places. It's quite easy to get away from the mass tourism and world-famous clubs to enjoy untouched landscapes, heavenly bays, authentic villages, a rich culture and hearty island cuisine.

Immerse yourself in the relaxed and laid-back lifestyle of the Pityusic Islands and join us as we retrace the footsteps of the Arabs, Phoenicians, pirates, hippies and sun worshippers from all over the world! 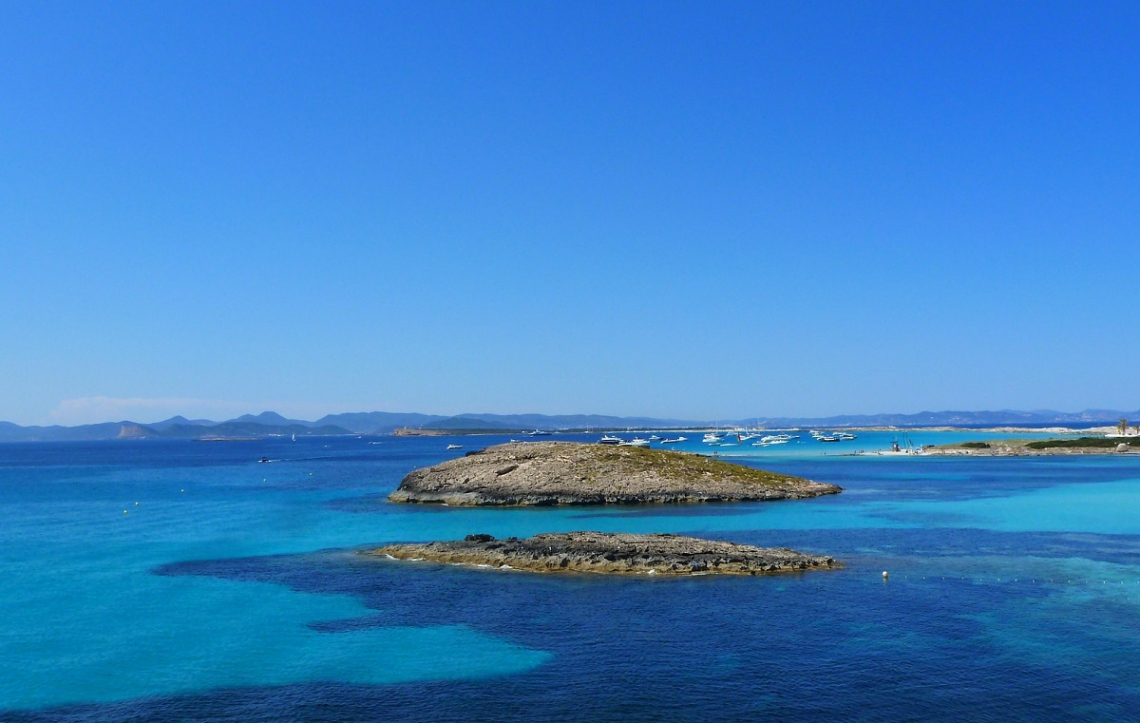 The Pityuses are part of the Balearic Islands. Photo: Pixabay

The Pityuses in a nutshell

Admittedly, when you hear the words Pityuses or Ibiza, a motorhome trip or caravan holiday is not necessarily the first thing you think of. But maybe that's exactly why you should consider this destination for your next getaway. Together with Mallorca, Menorca and the small rocky island of Cabrera, the Pityuses are part of the Balearic Islands. Although Catalan is spoken alongside Spanish, the Pityusic Islands are not part of Catalonia, but instead form one of the 17 autonomous regions of Spain. The archipelago has its own parliament, located in Palma de Mallorca, the capital of the Balearic Islands.

Just like their neighbouring islands, the Pityuses were formed by an uplift and are a continuation of the Andalusian mountains stretching from Gibraltar via the Sierra Nevada. An ocean trench about 1,500 m deep separates the islands from the mainland. The inhabitants of Ibiza are called "Ibicencos", and the spoken Catalan dialect "Ibizan". Ibiza is divided into five municipalities: the capital Eivissa, Santa Eulària des Riu, Sant Josep de Sa Talaia, Sant Antoni de Portmany and Sant Joan de Labritja. The capital of Formentera is Sant Francesc Xavier. 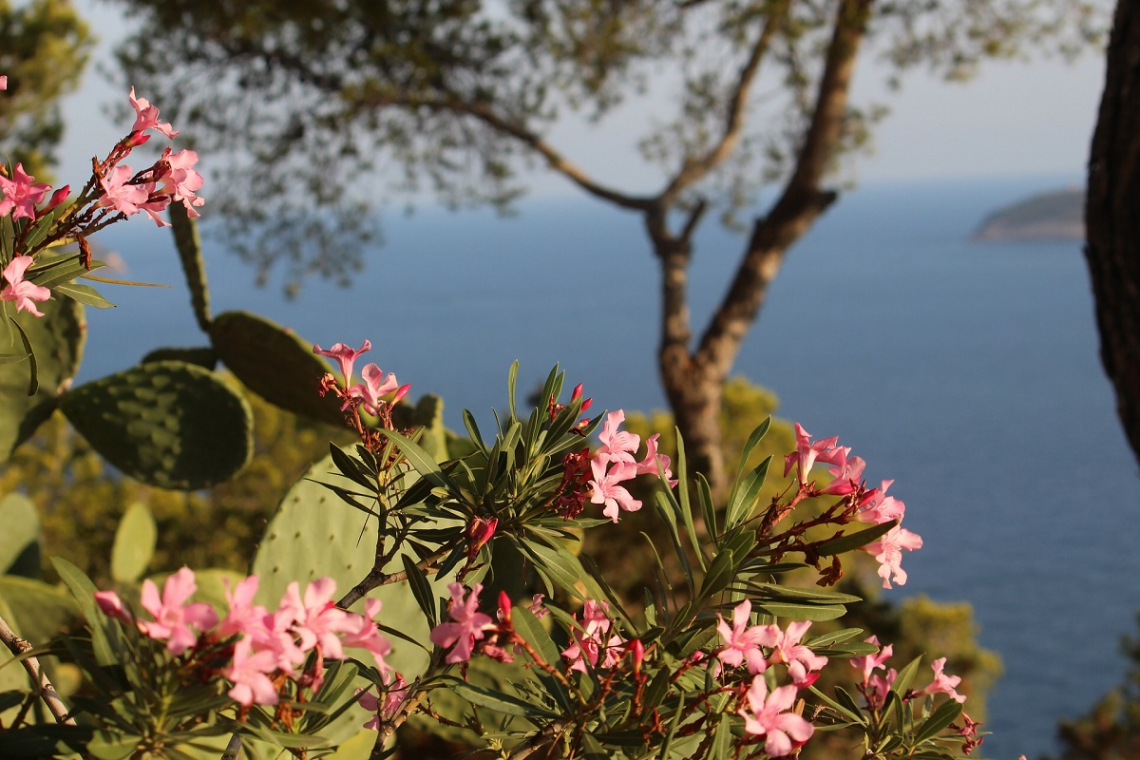 Ibiza shows its best side in spring and early summer. Photo: Pixabay

The best time to travel to Ibiza and the Pityuses

The Mediterranean climate of the Balearic Islands provides mild winters (Ø 12 °C) and not too hot summers (Ø 26 °C). The sea breeze, the proximity to the water and the high humidity of up to 75% make it easy to deal with the heat in the warm season. Expect some rain between December and February. However, since the campsites are only open from mid-April to the end of October anyway, we recommend visiting the island during those months. May and October are ideal for anyone who prefers it slightly quieter and wants to explore Ibiza and Formentera off the beaten track away from the tourist hotspots. You will encounter significantly fewer tourists on the beaches as well as on the streets compared to the main season from June to September.

Taking your motorhome or caravan on a ferry to Ibiza

It goes without saying that you will have to take a ferry to Ibiza if travelling with a camping vehicle. The car ferries that run from the Spanish mainland to Ibiza have comfortable sleeping berths for night crossings, an on-board restaurant with a buffet, boutiques, play areas for kids and even a cinema. Since campervans, motorhomes and caravans are not allowed on Formentera, you won't be able to take the ferry to Formentera. However, when it comes to getting a ferry to Ibiza, you have a choice of ports on the Spanish mainland: Barcelona may at times be the quickest to reach by land, but the ferry trip takes significantly longer than from ports further south such as Valencia or Dénia. But if you decide to sail from these ports, you may have to drive longer, which balances out the overall journey time. Tolls are also charged on the Spanish motorways. Ferry crossing prices vary depending on the time of year and vehicle type, but can cost up to €500 (return, for a large motorhome) from most ports in the summer months.

The ferries dock at the port of Eivissa in Ibiza. Photo: unsplash.com

Overview of ferry connections to Ibiza

The two shipping companies Baleària and Trasmediterránea offer crossings practically every day all year round. Ferries also run regularly between Ibiza and Formentera, taking between 30 to 50 minutes. However, they can only take a limited number of cars on board, making it an excellent reason to go on a day trip by bike or e-bike. 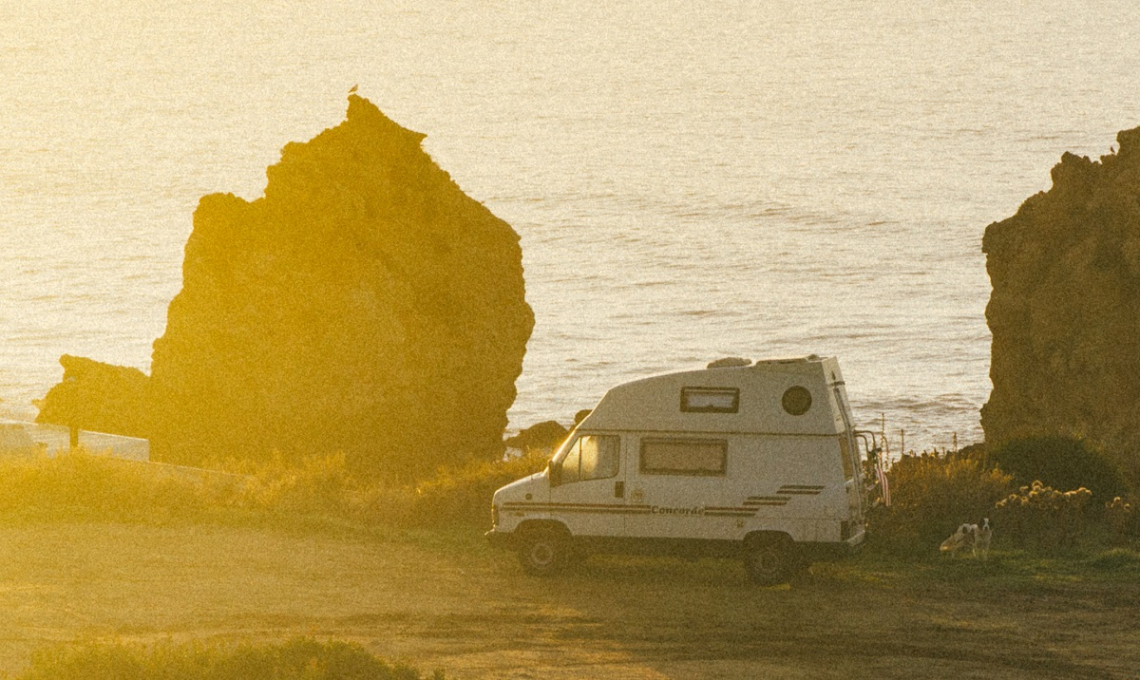 You shouldn't have any problems travelling through Ibiza by motorhome, caravan or campervan. Photo: unsplash.com

On the road in Ibiza with your campervan

Once you disembark from the ferry in Ibiza, you will find a well-developed road network that will take you to the most popular spots on the island on wide carriageways. The maximum speed on these roads is 100 km/h in some places, but the permitted speed is usually 80 km/h. There are a few narrow roads with tight curves that go to smaller villages in rural areas, and expect serpentines on some stretches. The maximum speed here is 50 to 70 km/h. In general, however, you shouldn't have any problems travelling through the island by motorhome or caravan and you can often park near the beaches and attractions – at least during the day. 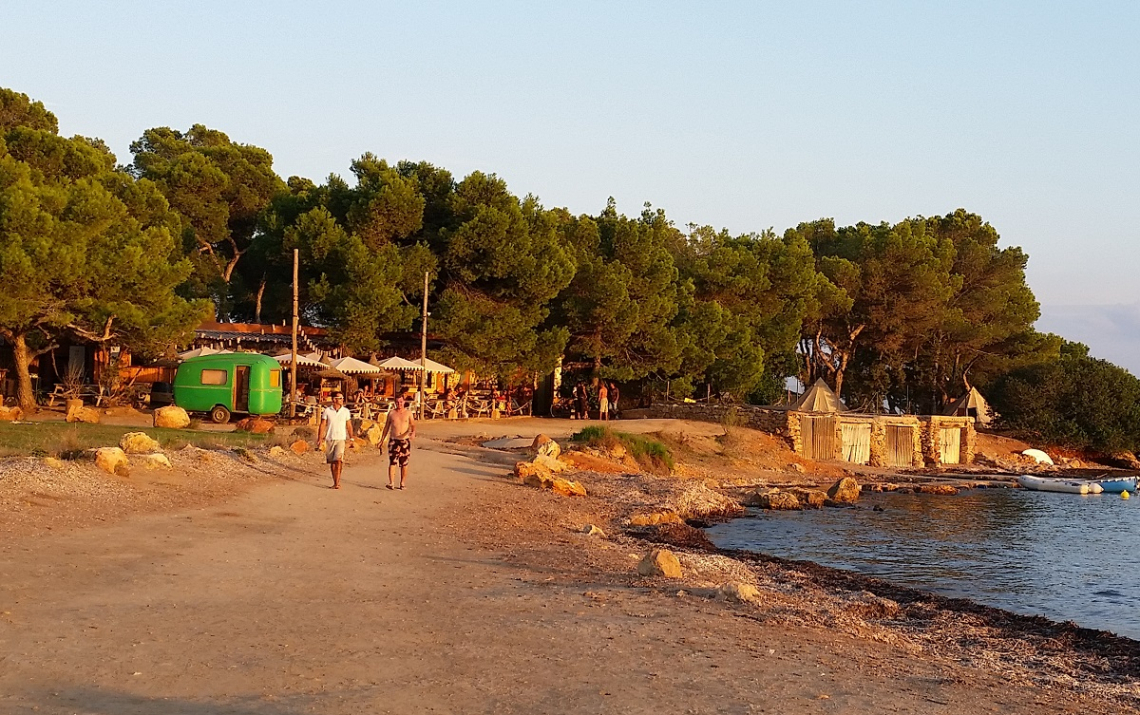 Camping La Playa is located in a pine forest by the sea. Photo: Carina Neumann

Campsites in Ibiza are few and far between

There are not many campsites in Ibiza, of which some only allow tents. So make sure you have reservations before booking the ferry. Here are some examples:

1. Camping La Playa in the bay of Cala Martina: this nostalgic bohemian campsite on the east coast is not only an idyllic spot under pine trees and right by the sea, but will also take you back to the 70s. The site includes the "Chirincana Beach Bar" where live music and healthy cuisine await you. The small sandy bay of Cala Martina has beach restaurants with freshly caught fish and water sports centres.

2. Camping Cala Nova in the bay of Cala Nova: hidden in a pine forest near the bay of Cala Nova in the east of the island, this quiet family campsite has a supermarket, bar, chill-out area, children's playground, Wi-Fi, sanitary facilities and direct access to Cala Nova beach, a mere 50 m away. A bus to Santa Eulària, the third largest city on the island, runs every half hour right in front of the site (you can also change trains here and continue on to Eivissa, the capital). The Es Canar resort is within walking distance.

3. Camping Cala Bassa: located at Cala Bassa, a picturesque bay in the west, this campsite of the same name is also set among shady pine trees. A shuttle boat runs from the beach to the adjacent bay of Cala Comte – undoubtedly one of the most beautiful on the island – and to Sant Antoni de Portmany, the second largest city on the island. The campsite has a bar/restaurant, swimming pool, library, BBQ area, supermarket, Wi-Fi and a children's playground.