Back
At a glance: With caravans and motorhomes in Norway 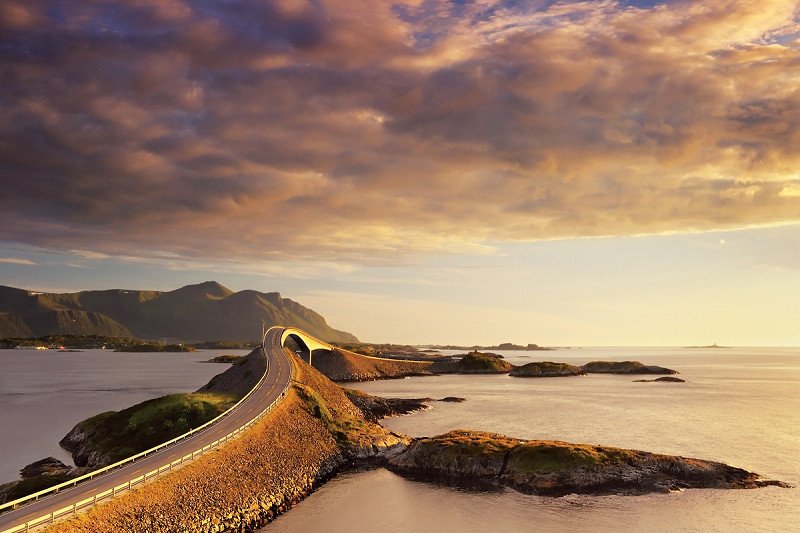 If you want to stay in Norway for more than three months, you should apply for a residence permit from the Norwegian police at the latest two weeks after entry. You can find more information on the website of the Norwegian embassy or at the Norwegian Central Office for Foreigners (UDI) .

Entry of children to Norway: If young people under the age of 16, for whom you are not a legal guardian, are required to have a valid ID, a power of attorney to issue a parenting contract for the duration of the trip (official certification is recommended) and a copy of the identity card of a legal guardian with them. 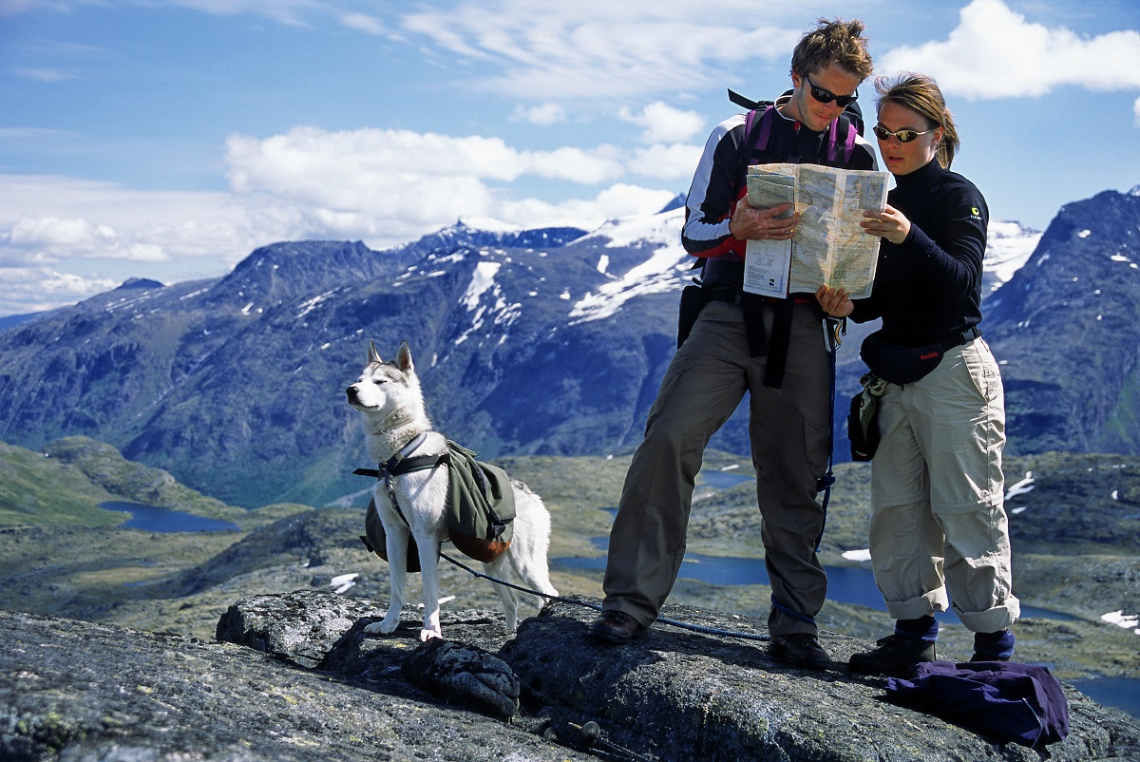 With regard to wild animals, dogs should also be kept on a lead outdoors in nature.
Photo: Anders Gjengedal - Visitnorway.com

Entry of pets to Norway: Since Norway is not part of the EU, entry with pets is somewhat more complex than in other countries. In recent years, however, entry has also been made easier here. If you are traveling with pets such as dogs, cats or ferrets, you should note the following: The animal must have an identification in form of an easily legible tattoo (before July 3, 2011) or a microchip, and have a valid rabies vaccine that was at least 21 days ago, and have a pet ID. Dogs must also be verifiably treated with a recognized tapeworm infestation 120 to 24 hours before entering the country. Important: Both the rabies vaccination and the tapeworm treatment must be officially registered by the veterinarian in the pet ID! In the meantime, however, a renewed tapeworm treatment in Norway is no longer necessary, so that you no longer have to go to a Norwegian veterinarian during your trip.

It is important, however, that if you are traveling to Norway with a pet - up to five animals are considered private imports - you have to present yourself at the border and present the documents and treatments described above. There are also a number of dog breeds that are not allowed to be imported into Norway per se. These include Pit Bull Terrier, Fila Brasileiro, American Staffordshire Terrier, Dogo Argentino, Tosa and Czechoslovakian Wolfhound. The same applies to hybrids of these breeds and hybrids between dog and wolf. The Norwegian Embassy provides more information about traveling with pets in Norway here .

Please also note: In Norway dogs generally need a leash in public areas and in nature. If you want to give your four-legged friend a little more freedom of movement in nature without endangering wild animals, you can help yourself with a towline, for example. 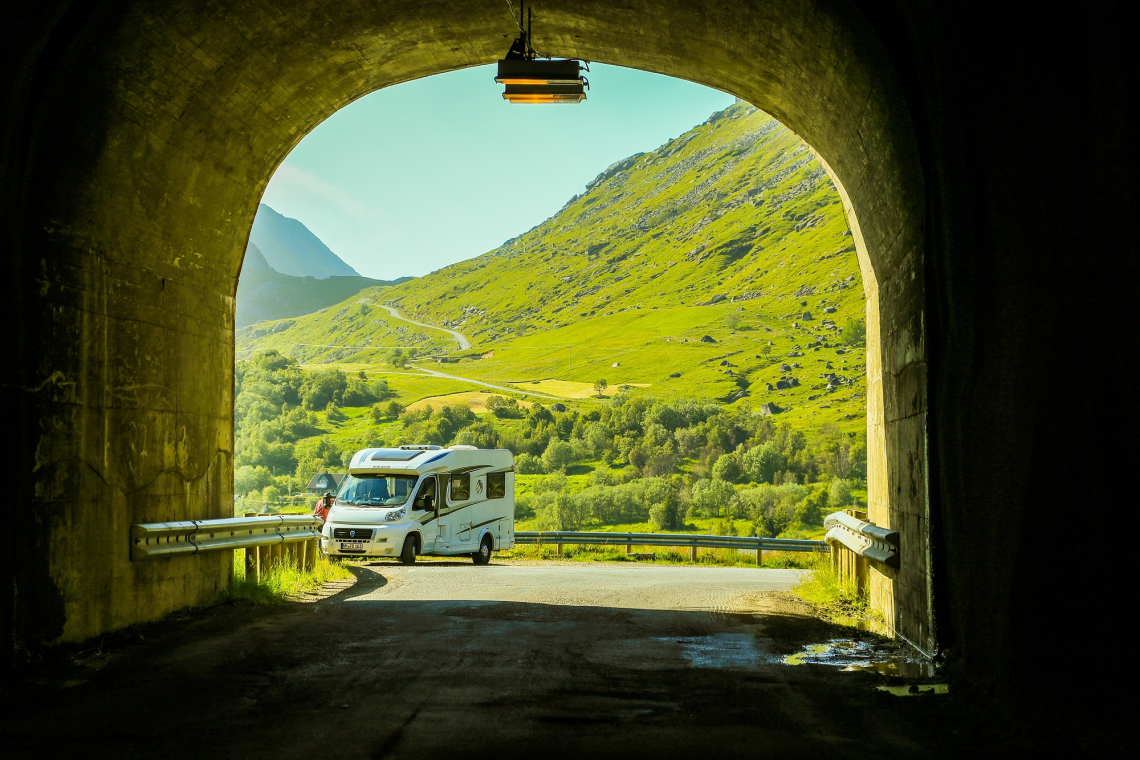 Most of the roads in Norway are well suited for motorhomes and caravan combinations. Photo: cabday / Foap / Visitnorway.com

The main traffic rules for motorhomes and caravans in Norway

* Attention: The maximum speed of unbraked caravans or trailers is reduced to 60 km / h.

More information for motorhome and caravan drivers in Norway

Petrol stations - opening hours and payment: Norway has a high density of petrol stations, but it is decreasing towards the north. If you drive to remote areas, you should fill up with plenty of fuel beforehand. Most petrol stations are open from 7 a.m. to 10 p.m. There are also a few petrol stations and (motorway) petrol stations with longer opening hours. You should always carry enough cash with you. Alternatively credit cards are usually accepted without any problems (an exception can be American Express).
Caution when refueling: In Norway there is a very cheap, tax-free diesel fuel, which is called "avgiftsfri". However, this is only intended for agricultural vehicles, military vehicles, fishing boats, and other commercial vehicles. It is not permitted to fill up this fuel as a tourist. 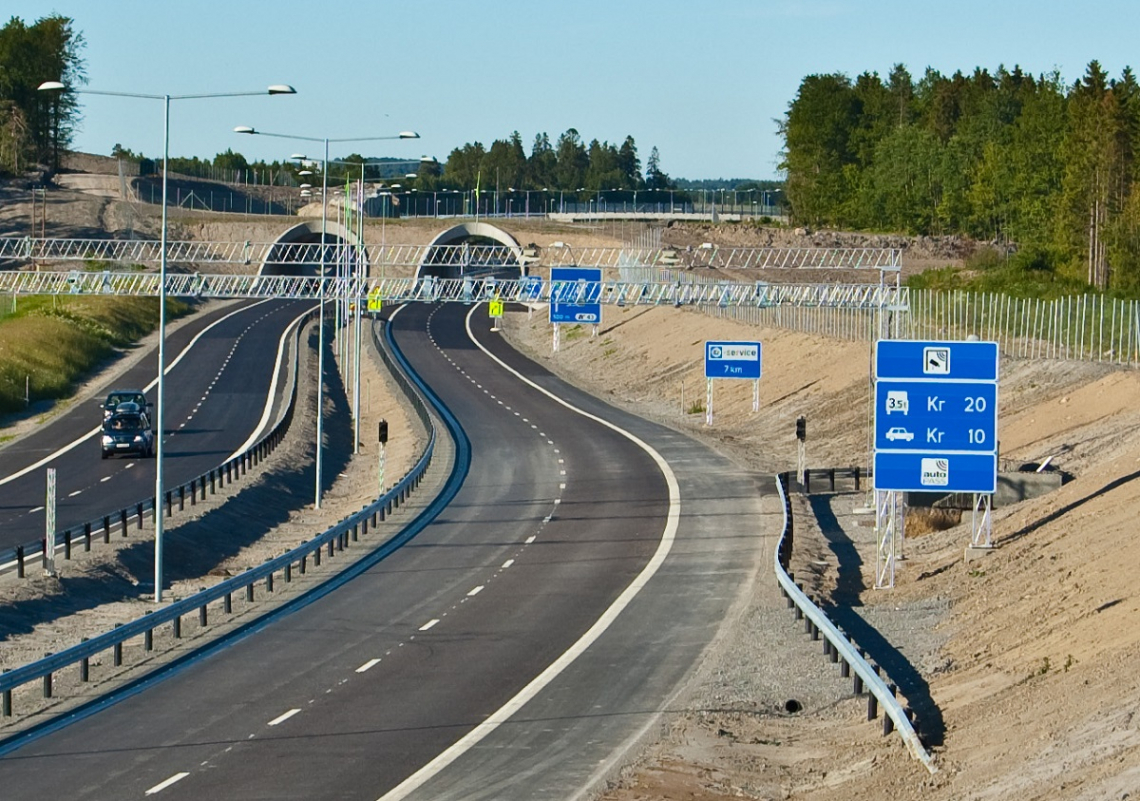 Road tolls in the classic sense do not exist in Norway, but individual routes are still subject to a fee. Because in Norway, new tunnels, bridges and roads are almost always financed through temporary toll payments. They are subject to charges until the construction costs are paid off. These currently around 200 routes are marked by blue signs with the words "automatisk bomstasjon", "automatic toll" or "toll plaza". There is a difference between tariff group 1 (vehicles up to 3.5 t GVW and all motorhomes over 3.5 t GVW with a valid AutoPASS contract) and tariff group 2 (commercial vehicles over 3.5 t GVW and motorhomes over 3.5 t GVW without AutoPASS contract). For most motorhomes, the toll fee is between 4 and 8 euros one way. You can find exact details of the toll fees at the toll operator Autopass. Important: in Norway the toll is recorded electronically in most cases. There are hardly any manual payment stations. Therefore, you should get an AutoPASS box in advance of your camping holiday or register your vehicle there.

In larger cities such as Oslo and Bergen, there is also a city toll that takes into account not only the vehicle class, but also a time and environmental factor. A cheaper way to go to Oslo, for example, is outside of traditional rush hour traffic. In addition, owners of an electric or hydrogen vehicle pay less than gasoline or diesel vehicles. Other cities in Norway that charge a city toll include Bodø, Førde, Porsgrunn, Skien, Harstad, Haugesund, Kristiansand, Stavanger, and Trondheim. 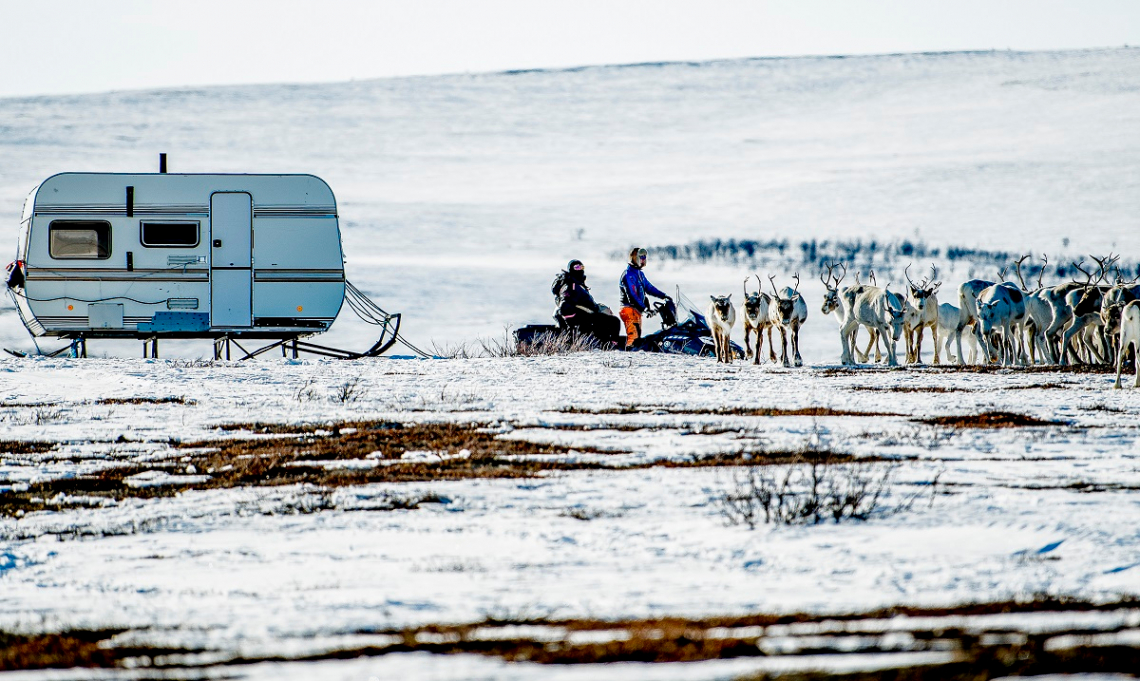 Warning signs when it comes to game change are to be taken very seriously in Norway - regardless of the season. Photo: Thomas Rasmus Skaug / Visitnorway.com

Alcohol limit in Norway: A maximum of 0.2 ‰ is allowed in Norway. Violations of this limit are very expensive and start at 520 euros. Depending on the severity of the violation, you will quickly end up in the 4- or even 5-digit range - license withdrawal included.

Light requirement: In Norway it is a legal obligation to always drive with your lights on! Violations are estimated at 185 euros.

Winter tires and snow chains: Surprisingly, there is no general requirement for winter tires for vehicles under 3.5 t in Norway, but they are strongly recommended for all motor vehicles. However, if you are using summer tires while driving on snowy or icy streets in winter, you must carry and use snow chains. If winter tires are fitted, this must be done on all four wheels with a minimum tread depth of 3 mm.

In Norway, winter tires are generally required for vehicles and their trailers who each weigh more than 3.5 t. The minimum profile depth is 5 mm. The regulation applies from November 15 to March 31. All-season or all-weather tires can also be considered as winter tires, provided they have the M * S mark. Between October 15th and the first Sunday after Easter, vehicles with a weight of more than 3.5 t must have snow chains on board.

The use of studded tires is allowed between November 1st and the first Sunday after Easter Sunday - in the northern regions of Nordland, Troms and Finnmark there is an extended period from October 15th to May 1st. If the weather and road conditions require it, studded tires may also be used outside of these periods.

Beware of game changes: Always observe the game change warning signs! Reindeer and elk often cross the streets at dusk and this is where the greatest attention is needed, especially in rural areas. If you are involved in a game accident, immediately inform the police (112) or the road service (175). 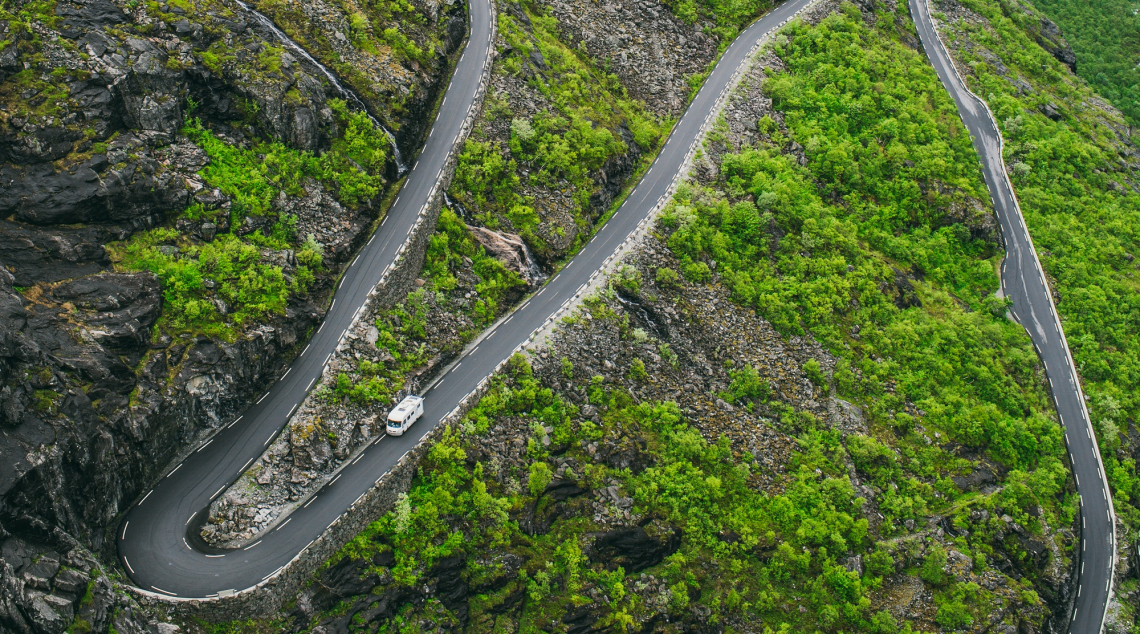 Even the famous Trollstigen in Norway can easily be driven on with the motorhome. Photo: Samuel Taipale / visitnorway.com

Important addresses and telephone numbers for holidaymakers in Norway