Back
Waterside camping in Germany 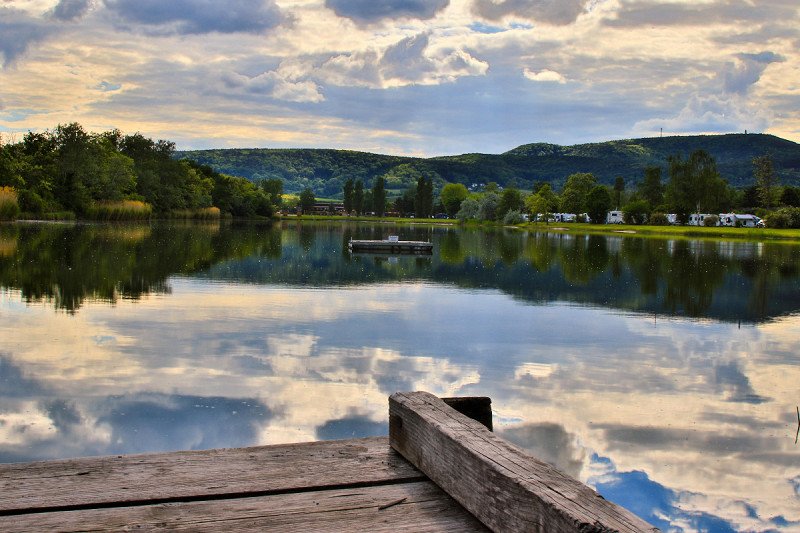 "When I see the lake, I don't need the sea any more" – true to this motto, Freeontour has put together a few inspiring, cosy spots by the water away from the crowds for you to discover on your next motorhome trip to Germany. Smaller, lesser-known waters also get to show off their beauty. Whether relaxing to the gentle lapping of a lake, doing water sports, exploring idyllic nature on hikes or coming across picturesque places by boat or bike – there's something for everyone here. Time to discover new shores!

An aerial view of the Dreifelder Weiher in the Westerwald Lake District. Photo: Dominik Ketz/rlp tourismus

Once upon a time, there were hard-working monks in the Westerwald low mountain range who dammed small ponds for fish farming in the 12th century. 500 years later, these ponds in today's Rhineland-Palatinate were expanded to form the seven ponds of the Westerwald Lake District. This not only created a diverse flora and fauna, but also a blue-green oasis for people wanting to slow down in nature. Animal species threatened with extinction, such as the bitterling, can find much-needed refuge in the biotopes. Whether on two wheels or on foot, nature lovers can explore the lake-dotted area on 130 kilometres of marked cycling and hiking trails, watch rare animals and even complete sections of the well-known Westerwald-Steig long-distance hiking trail. 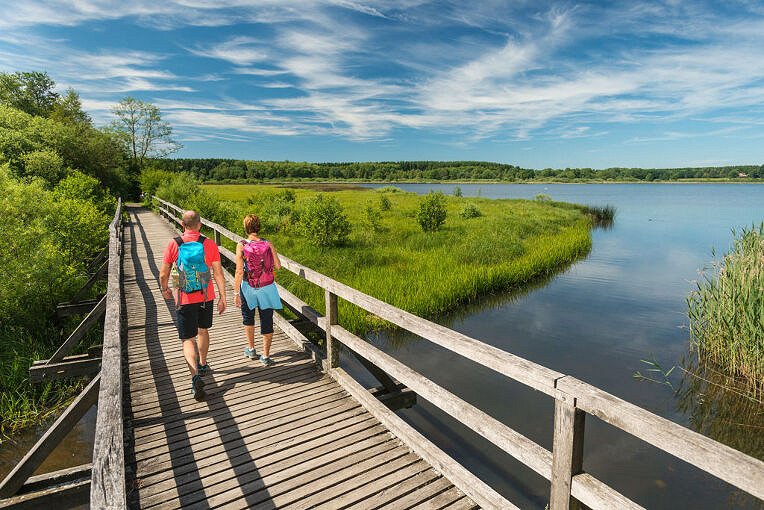 - Hikers can walk on wooden bridges over glittering water on the 31-kilometre "7-Weiher-Weg" as the trail snakes its way along the seven lakes. Good to know: you can walk the Weiher-Weg in stages as it is divided into four sections of 5 to 18 kilometres.
- Adventure-seekers can walk to their hearts' content on the Westerwald-Steig long-distance hiking trail because stages five and six of the well-known route – Westerburg-Freilingen and Freilingen-Nistertal – go past Postweiher.
- Cycling fans can experience the beauty of the area on the 20-kilometre lake district circular cycle route.
- Since a lot of the Westerwald Lake District is under conservation, you may only swim in permitted areas. There is a large lido at Postweiher where you can swim and ride a pedal boat.
- High up: the Schwengersberg (463 m) mountain offers a wonderful view over the lakes. The benches you come across on the Westerwald-Steig are perfect for relaxing and gazing into the distance.
- The Hofgut Schönerlen caravan and camping park is located at Hausweiher, the smallest of the seven ponds. The park-like complex of this historic estate also has its own pond with a lawn for sunbathing on a sandy bay, which can only be used by camping guests, adding to the exclusive ambience. You can also take part in guided hikes that start from here. Incidentally, as a Freeontour member, use your member card at this campsite to benefit from a discount. 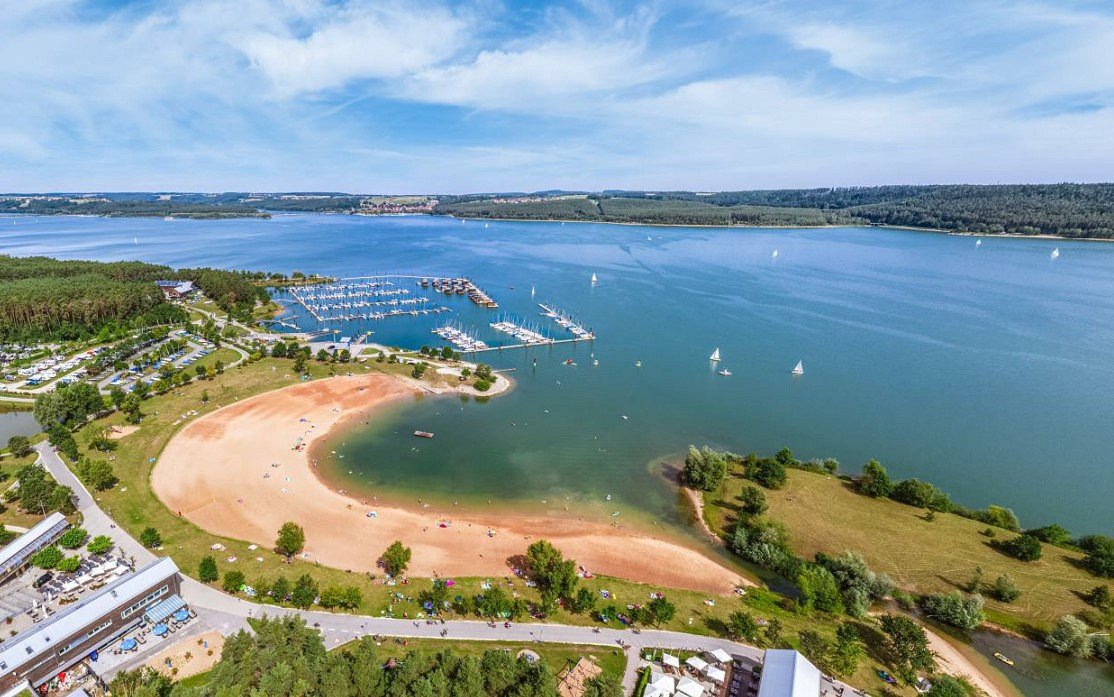 Kleiner Brombachsee is the smallest of the seven bathing lakes. Photo: Fränkisches Seenland

Sandy beaches in Germany? Not unusual on the North Sea and Baltic Sea coast. But seven lakes in the Bavarian region of Franconia can also deliver. Artificially created bathing lakes now form the Franconian Lake District. Nature, sports and culture enthusiasts will get their money's worth here as this recreation area is a Mecca for a variety of outdoor activities. The Altmühl River connects the Franconian Lake District with the Altmühl Valley Nature Park, the fourth largest nature park in Germany. The leisureliness of Bavaria's slowest river is contagious and will encourage you to unwind and slow down. The fertile landscape is full of terraced vineyards, hop plants, meadow orchards and historical treasures such as old palaces and castles or the Limes, which is a UNESCO World Heritage Site and tells the story of the ancient world through the Middle Ages to modern times. The lakes are a paradise for water sports such as sailing, surfing, kitesurfing, wakeboarding or stand-up paddling as well as for kayak, canoe, pedal boat and rowing boat trips. 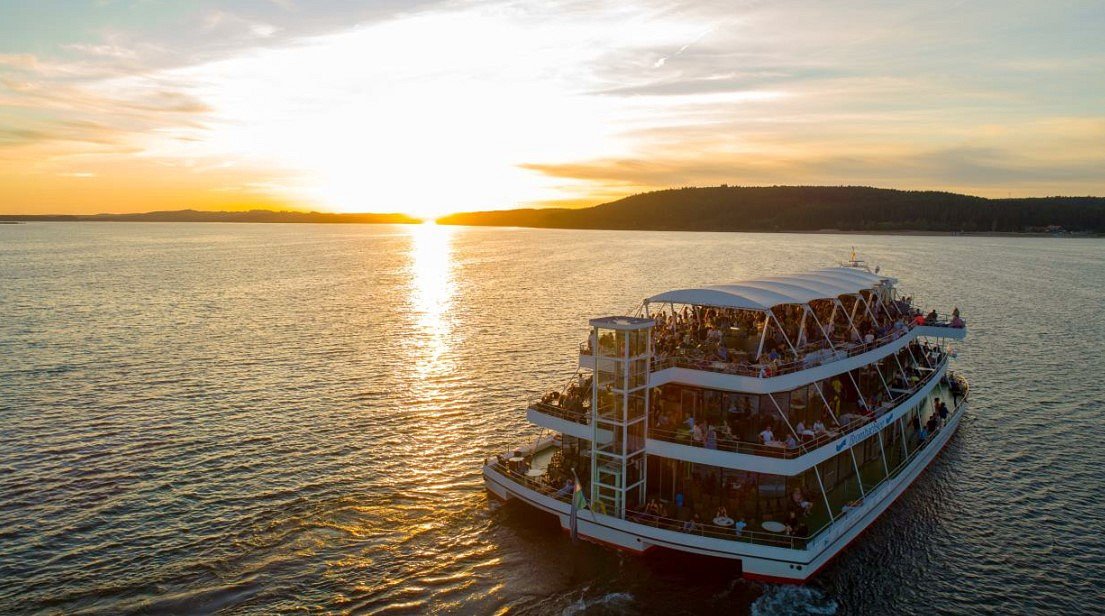 How about a mini cruise across the Großer Brombachsee or Altmühlsee Lake? Photo: Fränkisches Seenland

- If you enjoy hiking, then you'll love the 200-kilometre Altmühl Valley panorama trail, which also goes past the bizarre "12 Apostles" rock formations. You obviously don't have to walk the entire trail in one go!
- Visit the bird island in the Altmühlsee Lake and watch rare waterfowl, amphibians and plants from viewing platforms on the signposted 1.5-kilometre circular route.
- Go for walks and collect shells by the Rothsee Lake, between Hasenbrucker Insel (island) and Heuberger Badestrand (bathing beach) – the long beaches exude Caribbean holiday flair thanks to palm trees and turquoise-blue water.
- Take a mini cruise on the Altmühlsee Lake and Großer Brombachsee Lake.
- Experience regional culinary delights at colourful and vibrant markets such as the Wassertrüdinger Genussmeile (culinary area), the Merkendorf Cabbage Week or the Röttenbach potato market.
- The Bergwaldtheater Weißenburg puts on musicals, operettas, concerts and plays in a wooded quarry.
- Try forest bathing in Pleinfeld at the Großer Brombachsee Lake. A huge coniferous forest flows directly onto the beach. Did you know? The Japanese have been practising forest bathing as an important ritual for the body and mind for thousands of years, and the trend is also becoming more popular in Europe. The Waldcamping campsite is surrounded by forest trees.
- The Zeltwiese Absberg campsite is a unique RV site with the perfect location on the shores of the somewhat remote and rarely visited Kleiner Brombachsee Lake. A small motorhome area with twelve pitches has recently been erected right by the water. 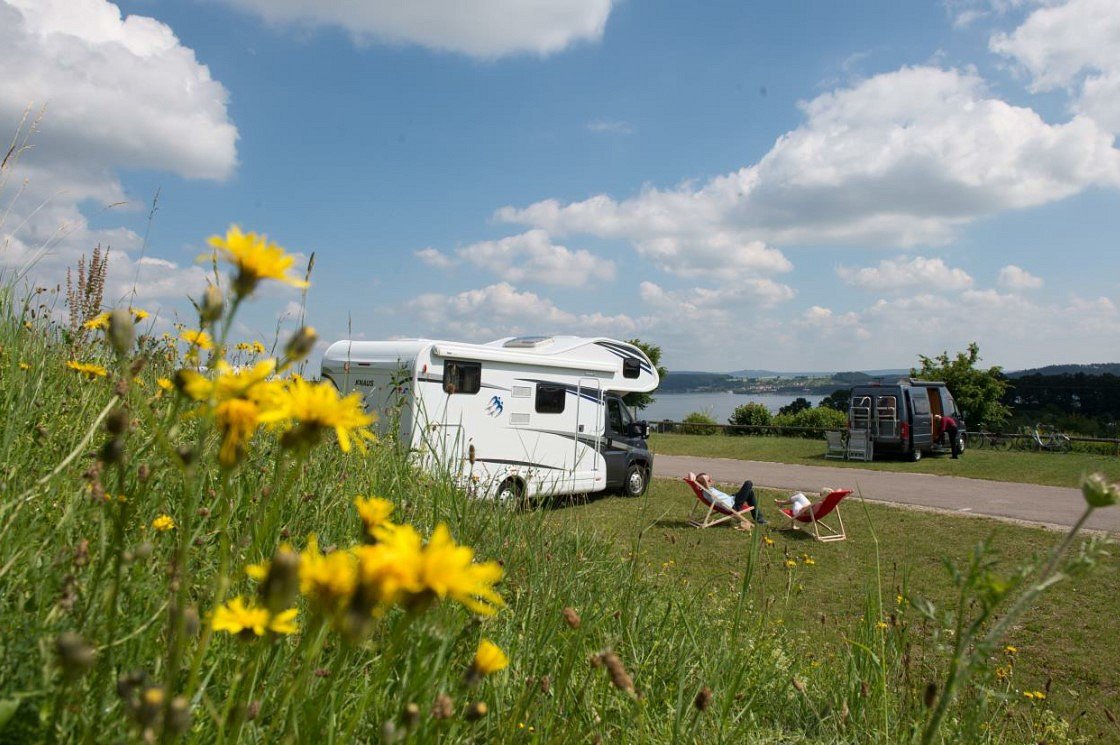 Still looking for a cosy waterside spot? Bavaria is perfect for relaxing thanks to its many bathing lakes – like here at the panoramic pitch at the Igelsbachsee Lake. Photo: Fränkisches Seenland

- Insider tip: explore Neuschwanstein Castle on a hike or bike ride from the Bannwaldsee Lake – a small lake that is far less known than its larger neighbours such as Forggensee. The Bannwaldsee campsite has received several awards.
- Take a stroll through Munich, the capital of Bavaria, and then relax at the campsite on the banks of the Isar – you can do all that when staying at the Thalkirchen campsite, which connects the large town with nature. There are beautiful cycle routes along the Isar and through dense forests to the Fünfseenland lake region, a picturesque area with five natural bathing lakes, castles and the medieval Andechs Abbey. The campsite at the small, less visited Pilsensee Lake is quiet and right by the water. 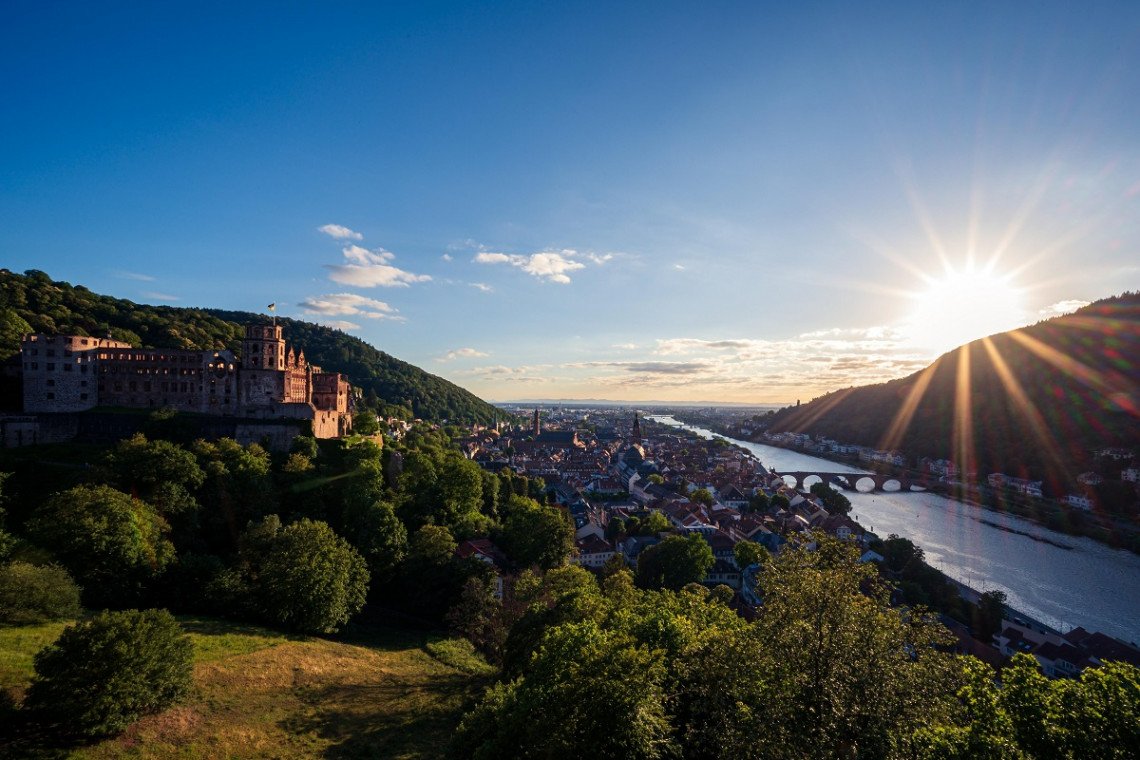 Heidelberg is the pearl of the Neckar River and definitely lives up to its nickname. Photo: Pixabay

Tip #3: Culture, culinary delights and canoe trips between the Rhine and Neckar

Two rivers in a small area, winding their way like lifelines along artistic half-timbered houses, liveable towns like Heidelberg and Heilbronn and romantic landscapes – numerous (culinary) cultural treasures and activities await you where the Neckar flows into the Rhine. Heidelberg, the cultural heart of the Neckar, is regarded as one of the most beautiful cities in Germany. So beautiful that, intentionally or not, it was spared from Allied air raids during World War II. In fact, Heidelberg was hardly hit and you can still enjoy the historic charm of the city today. Its university is the oldest in Germany. Heidelberg Castle towers majestically over the medieval town, with a view of the surrounding terraced vineyards, dense forests and the Neckar River. Admittedly, Heidelberg is anything but off the beaten tourist track, which is why we recommend staying at campsites further away from Heidelberg, but not too far so that you can't make a day trip or two. Moreover, you can explore many more attractive towns on the Neckar and Rhine, boasting half-timbered houses and a proximity to nature. After an eventful day full of beautiful views, relax at a campsite that is right on the water's edge. 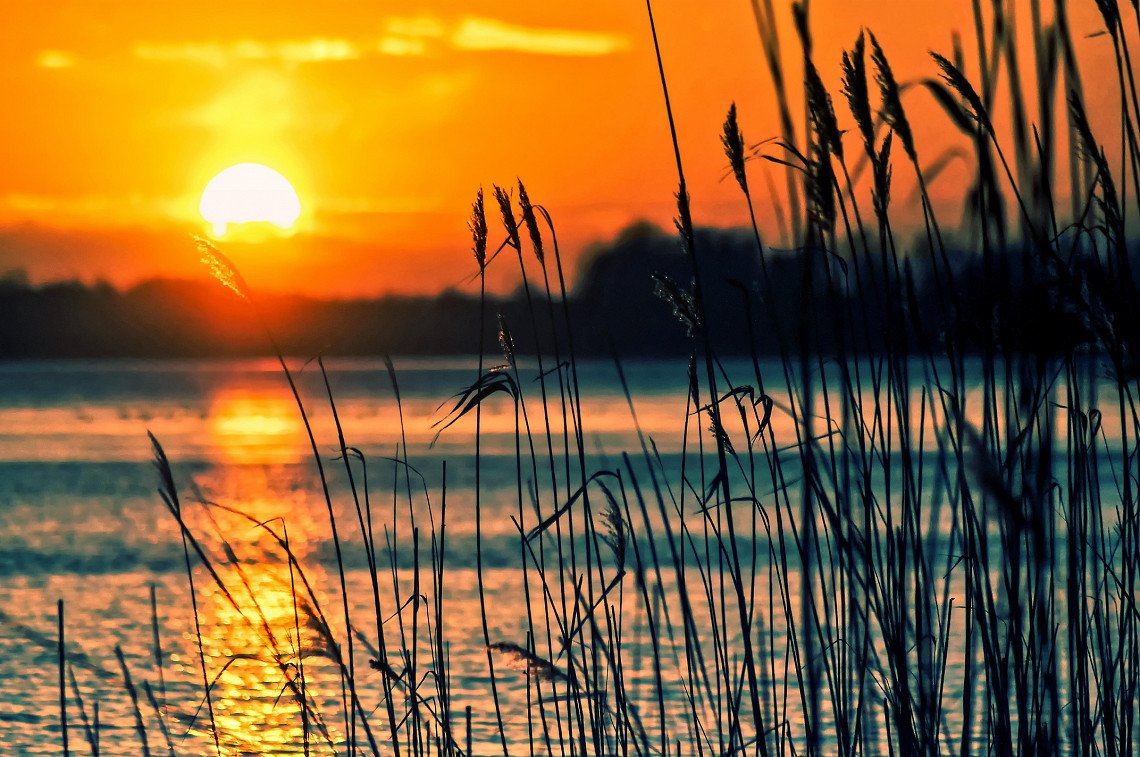 You can experience natural paradises on the Rhine and Neckar as well. Photo: Pixabay

Inspiring highlights for camping on the Rhine and Neckar

- Take a river trip on the Neckar, e.g. from Heidelberg or Heilbronn.
- Visit charming palaces and castles and go on a journey through time.
- Take part in one of the many wine tours – either through the idyllic terraced vineyards or through the wine bars and wine cellars in the towns.
- Enjoy small natural paradises, e.g. on the tiny Kollerinsel, an island with the Rhine on one side and Kollersee, an old branch of the Rhine, on the other. Tranquillity, idyllic surroundings and water sports such as canoeing, stand-up paddling or sailing await you here. The small island has been a nature reserve since 1938 and is home to a variety of animals and plants. You can explore the island on foot or by bike on the six-kilometre signposted circular dike. The small Kollersee campsite is right by the water and rents out shepherd's huts and safari tents in addition to pitches. The Kollersee Lake has very good water quality.
- Also right by the water, Fortuna Camping am Neckar promises relaxing holidays. You can splash around in the river, visit the small town of Binau, explore the surrounding countryside on a hiking trail, relax in the hotel's own outdoor pool or in one of the nearby thermal baths or be pampered by the attentive restaurant staff.