Back
Colourful gardens and parks in Ireland

Colourful gardens and parks in Ireland

​Spring and summer camping trip to southern Ireland to visit gardens and parks – enjoy the colourful side of the Emerald Isle. 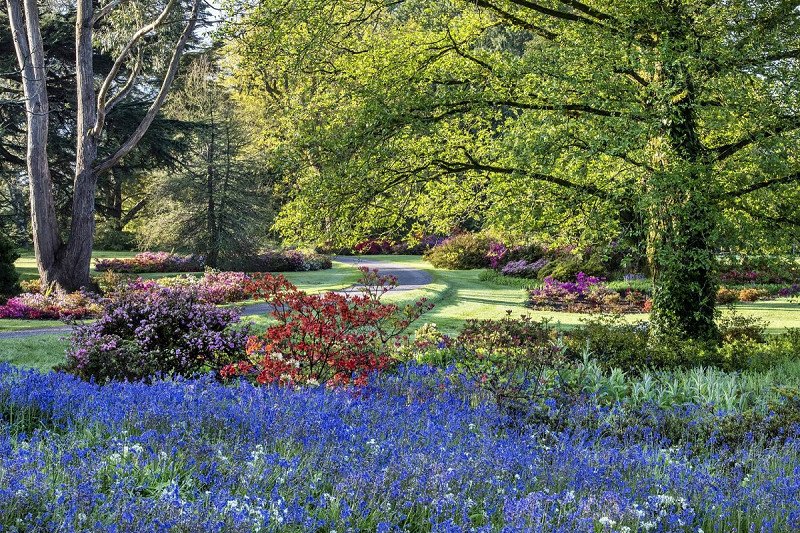 Colourful gardens and parks in Ireland

​Spring and summer camping trip to southern Ireland to visit gardens and parks – enjoy the colourful side of the Emerald Isle.

Spring is a wonderful time to visit Ireland. This emerald island comes alive with flowers, be it in the city parks, national parks or in the magnificent grounds of former mansions. Thanks to the mild Gulf Stream climate, Ireland's flora explodes in April and May, presenting the perfect scenario for a motorhome or caravan trip to the most amazing gardens and parks. Freeontour has put together a selection of must-see gardens in Southern Ireland for you to enjoy. 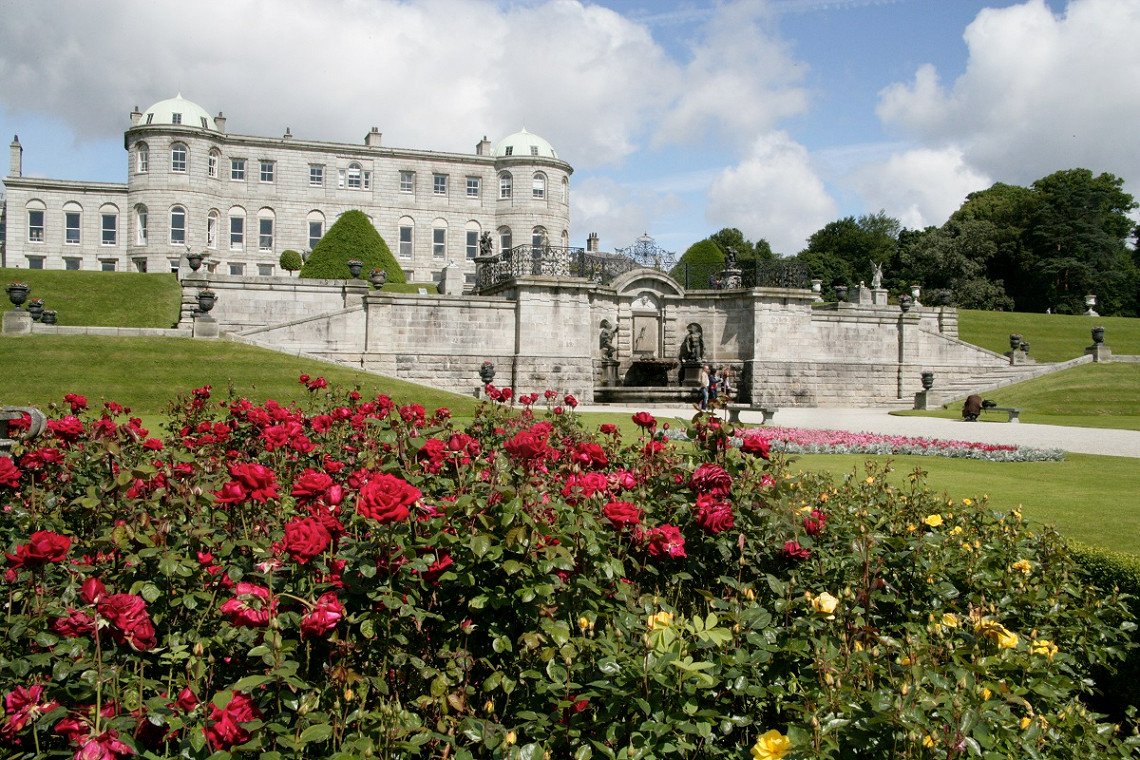 Powerscourt – floral displays, a waterfall and a setting for King Arthur

If you take the ferry from France to Ireland with your camping vehicle, you will usually start your camping holiday in Dublin. So it makes sense to begin our garden tour in the south of Dublin as well, and that with a highlight: Powerscourt House and Gardens in County Wicklow is well known for its diverse gardens. You will not only find the longest herb garden in Ireland here, but also the highest waterfall in the country. It is fed by the little river Dargle and falls 120 m with a deafening roar. This natural spectacle has already served as a backdrop for historical Hollywood films such as Excalibur and King Arthur. Laid out like a huge amphitheatre, the formal Italian garden is quite the opposite. Designed by the German architect Richard Cassels in the first half of the 18th century, the manor house (with 68 rooms) towers over this natural splendour. All of this and more makes Powerscourt a must on the itinerary of any motorhome trip through Ireland, especially as there is a large car park where you can park larger motorhomes. Our tip: the waterfall is about 6 km from the park, with a separate car park. If you are feeling active, you could even hike or cycle to the waterfall.

Hidden Valley Caravan and Camping Park is a good place to stay overnight, about 30 minutes south of the park in a quiet, green setting. If you prefer to be closer to the coast, Wolohan's Silver Strand Caravan & Camping Park is just as far away. Incidentally, both campsites benefit from not being too far from the next garden on our trip. 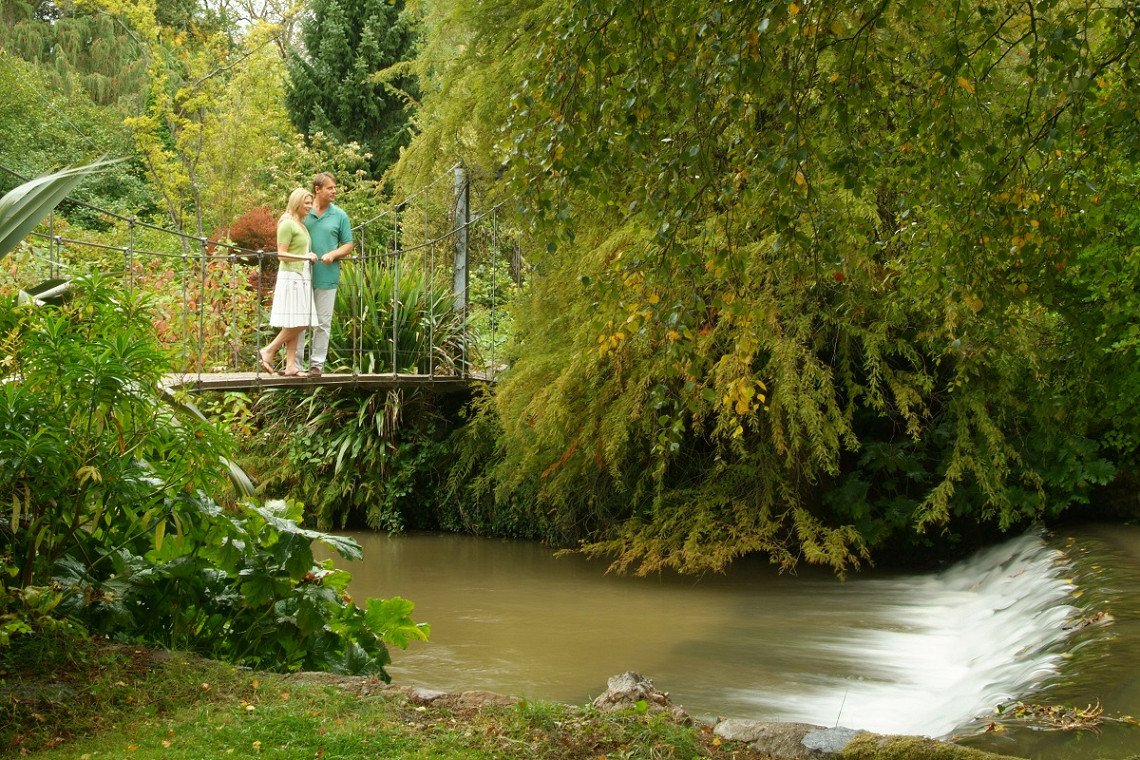 Mount Usher Gardens is another spectacular garden worth visiting in County Wicklow, especially as the park contrasts greatly to the seemingly rigid gardens at Powerscourt. Instead, Mount Usher is inspired by the design concepts of William Robinson, a landscape gardener who created the idea of a natural garden in the second half of the 19th century. But even a wild natural garden has to be managed and follow plans set by the gardener. For example, the River Varty was routed through the entire area specifically to emphasise the natural charm of this garden. It also provides the right conditions for around 5,000 different plant species, making Mount Usher Gardens one of the most important botanical collections in Ireland. In addition to native trees and shrubs, it includes many exotic plants from Asia, North America, South America, Asia Minor and Southeast Europe. 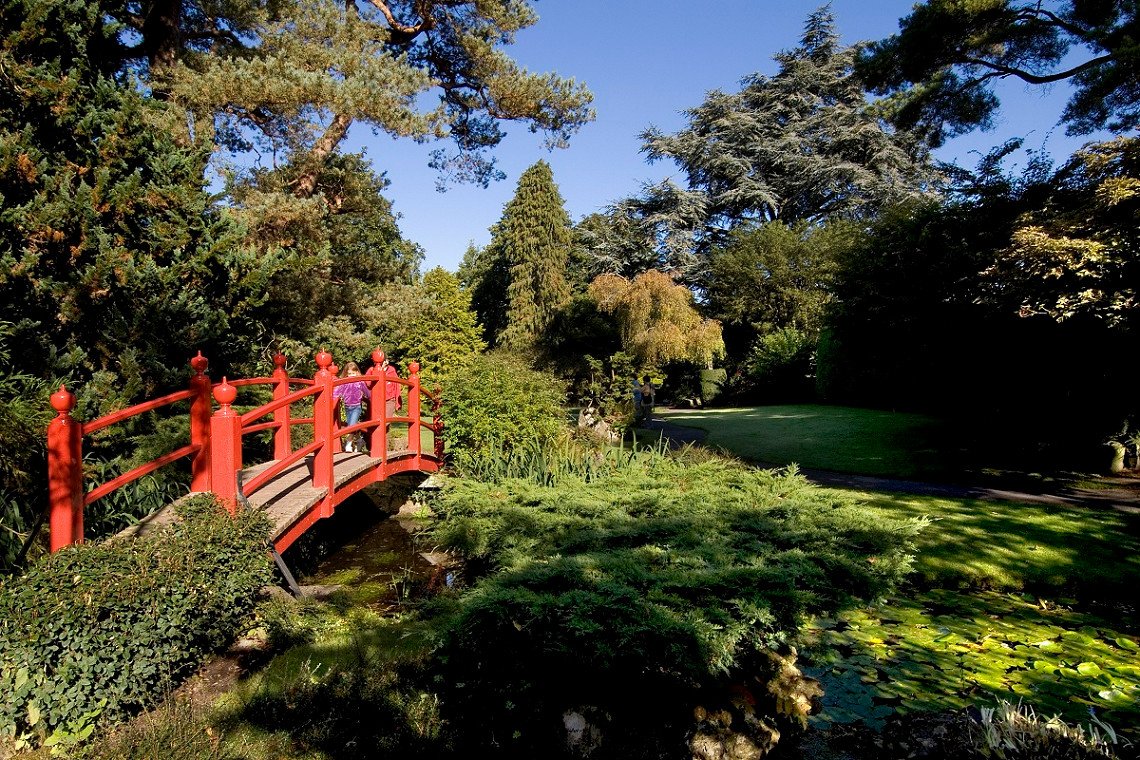 The Irish National Stud – horses and a romantic garden

The Irish National Stud is near Kildare, and not only a great place for horse lovers. The Japanese Garden attached to the stud farm is perfect for dreamers and romantics and is one of the most beautiful of its kind in Europe. After all, it was created by the Japanese master horticulturist Tassa Eida and his son Minoru in the early 20th century. 20 points in this garden symbolise the "Life of Man". You enter the garden through the gate of oblivion and then follow the path of life along magnificent flower borders and trees. It continues through the tunnel of ignorance over the engagement and marriage bridges to the hill of ambition and over the red bridge of life before the green journey ends in the garden of peace and contentment. You can then take a stroll along the stud farm paddocks. But please note: the visitor car park closes at 6.15 pm, so keep an eye on the time if going for a longer walk.

The Forest Farm Caravan & Camping Park in South Kildare is a good base for visiting the stud farm and the Japanese Garden. 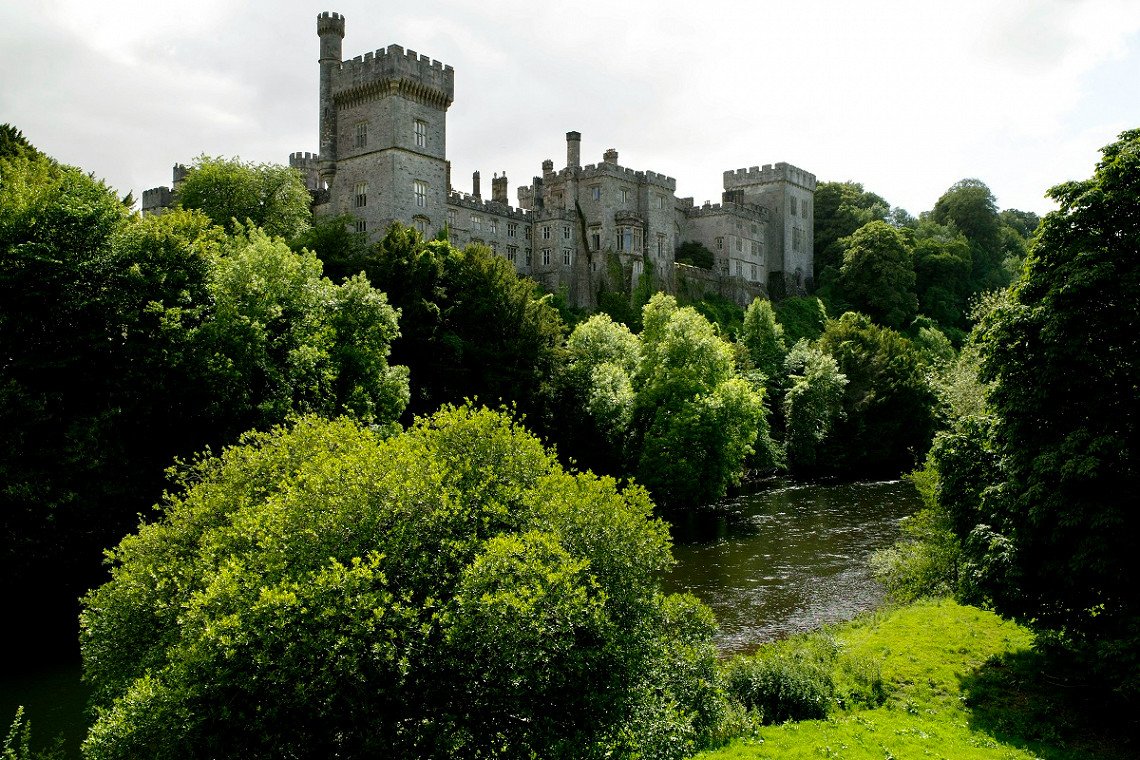 The next stop on our motorhome trip to Ireland's parks and gardens is at Lismore Castle on the banks of the River Blackwater, just under an hour's drive northeast of Cork. It's worth coming here especially if you love historic gardens full of floral splendour. The lower garden mostly dates from the 19th century and is home to winding paths that lead you through trees, shrubs, open lawns, a stately avenue of yew trees and lots of colourful flowers – from the spring flowering magnolias and rhododendrons through to the later flowering shrubs and borders, there is always something in bloom. Everything is topped off with a constant view of the historic castle and its many towers.

Entry to the upper garden is through the Riding House. This walled garden was first constructed in about 1605, where most of the walls and terraces have remained the same, although the plantings have been adapted to suit the tastes of the castle's inhabitants. This garden is a mix of ornamental borders and productive areas where vegetables, herbs, fruit and flowers are grown for today's castle residents. The garden also contains several pieces of contemporary sculptures by a number of different artists. Due to the historic nature of the gardens and naturally steep terrain of the ground, accessibility for wheelchair users can be limited.

Lismore Castle is still privately owned and lived in, which is why a classic castle tour is not possible. However, you can take part in a virtual reality tour of Lismore Castle at the Lismore Heritage Centre, which is not far from the castle. Free parking is also available here – there is no visitor car park at the castle itself.

If you prefer to stay close to the coast, then Bayview Caravan and Camping Park near Dungarvan is the place to be. Blarney Caravan & Camping Park is the ideal starting point if you're keen to head to the next stop on your motorhome trip as well as explore the city of Cork. 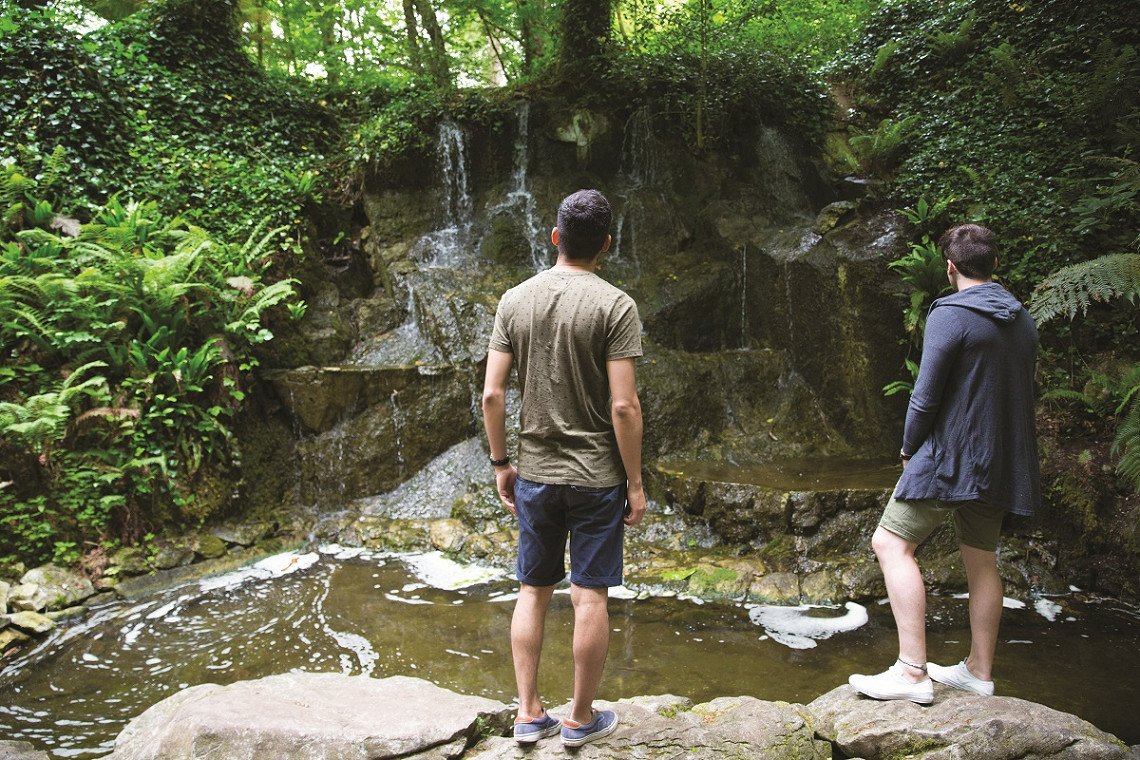 Thanks to its diverse and varied gardens, Blarney Castle is a magnet for visitors to County Cork and all of Ireland. If you want to enjoy the abundance of flowers in peace and quiet, you should get here as early as possible. However, most visitors are drawn to the famous Blarney Stone on the castle's battlements, as legend has it that if you kiss the Blarney Stone, you will gain the gift of eloquence. To do so, you have to lean backwards from the parapet walk. The gardens, in which various rock formations, caves and rock gardens can also be found, are just as worthy of a visit. A special feature among Irish gardens is the Poison Garden, which is historically part of a traditional kitchen garden in which plants were also grown for herbal remedies. The Poison Garden here houses a collection of poisonous plants from around the world including wolfsbane, mandrake, ricin, opium and cannabis. Many of these are labelled with information about their toxicity and traditional and modern uses. Unfortunately, dog owners will not be able to enjoy the gardens with their dogs as dogs are not permitted on any part of the estate.

There is a visitor car park at the castle, but it can only be used during opening hours. If you plan on cycling to the castle, we recommend staying at the Blarney Caravan & Camping Park just a few kilometres away. 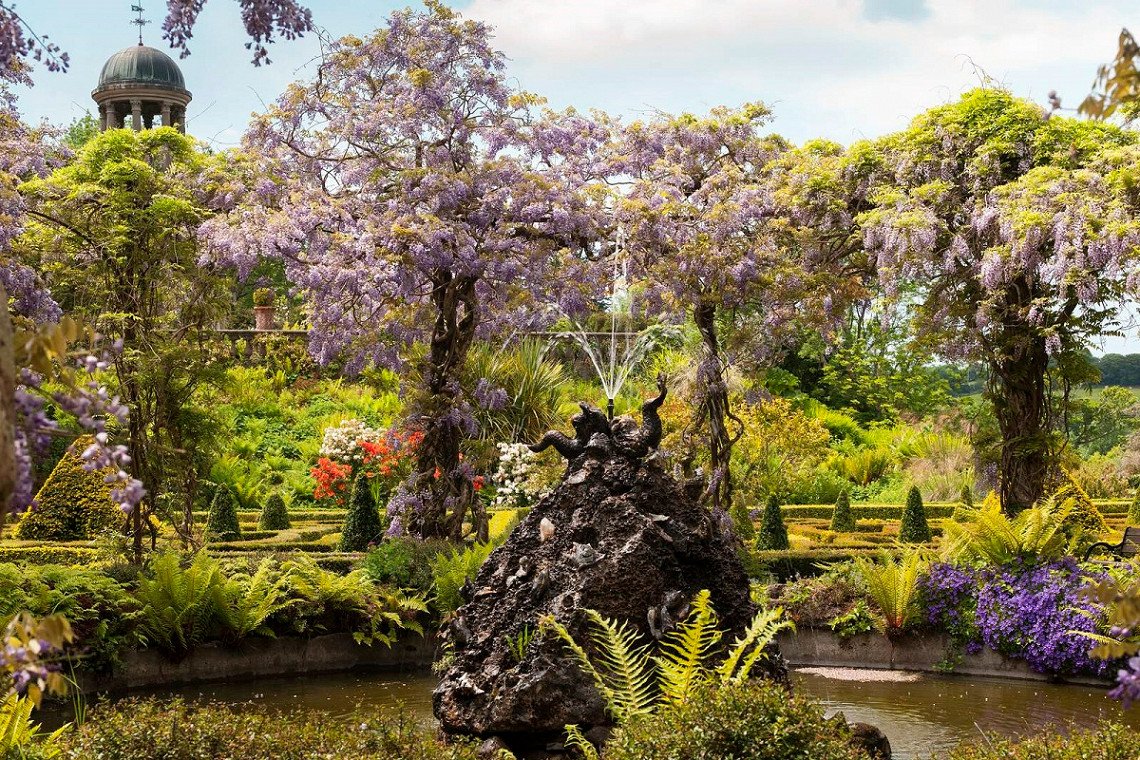 Bantry House and Garden – warmed by the Gulf Stream

Another fantastic garden in Ireland is located above Bantry Bay in County Cork: Bantry House is a Georgian gem from the early 18th century with an enchanting location and garden landscape. Bantry is warmed by the tail of the Gulf Stream like no other place on the west coast of Ireland. This is why tropical plants can grow in the gardens here – mighty palm trees sway in the wind, metre-high agaves are more reminiscent of Mexico than Ireland and monumental stone stairs are flanked by lush azaleas and rhododendrons. There is a visitor car park next to the estate, which also has space for motorhomes and car/caravans.

You can park your RV at Eagle Point Camping for the night, right by the water, about six kilometres north of Bantry House. The site is on a promontory and has a lot of space. 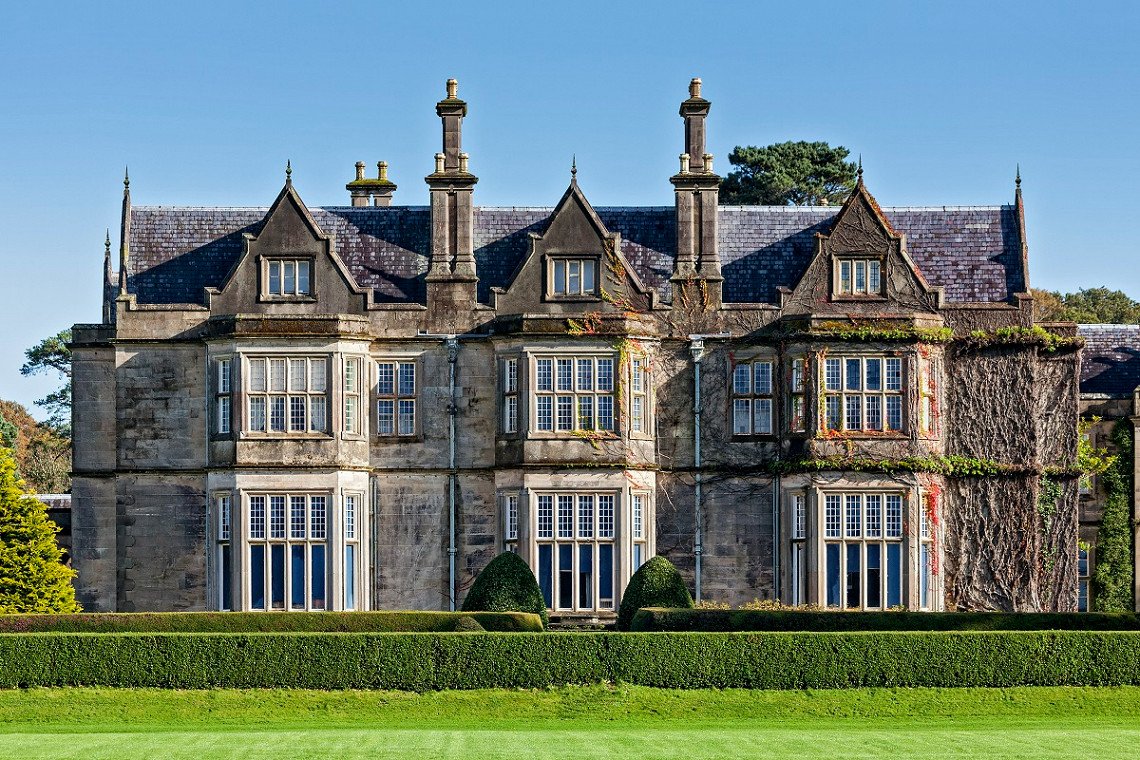 Muckross House – in the heart of Killarney National Park

If you love nature and happen to be in the southwest of Ireland, a visit to Killarney National Park is a must. And that includes stopping by at Muckross House and Gardens, one of County Kerry's most popular attractions. On the one hand the architecture of the Victorian manor house on the shore of Lake Muckross is simply fascinating and its interior will take you back to bygone times. On the other hand the 4,000 ha garden area (as part of Killarney National Park) is appealing thanks to its various gardens and surroundings, e.g. a landscaped garden that was created specifically for Queen Victoria's visit in the mid-19th century. Moreover, you can also stroll through the Sunken Garden, Rock Garden and a part of the garden with a horticultural stream.

Free visitor parking, which is also suitable for motorhomes, is available not far from the property.