Back
Camping holiday on the Danube in Germany 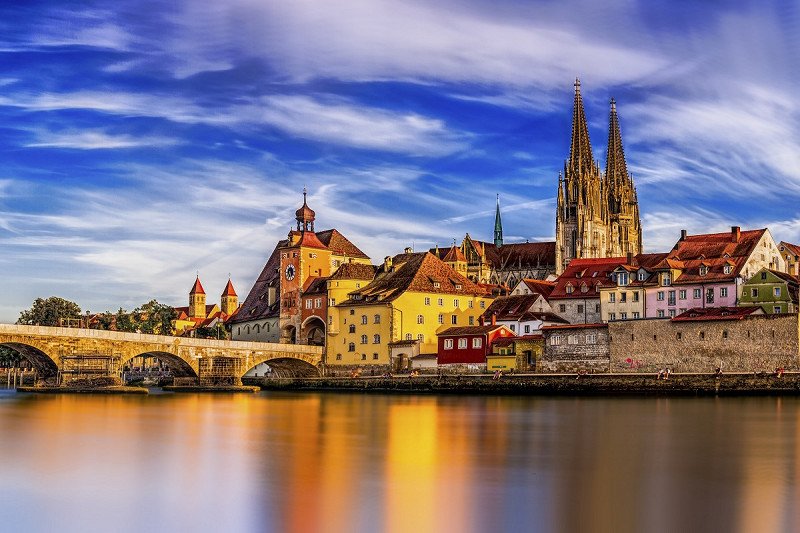 Headstrong and extraordinary, the Danube has fascinated people for centuries. And it attracts millions of tourists and campers every year thanks to its huge geographical, historical and cultural importance in Europe. Freeontour has put together some of the most beautiful cities and sights along the Danube in southeast Germany to give you some inspiration for your next camping trip.

View over the Danube from the Bogenberg mountain on the the Danube Panorama Trail. Photo: Michael Körner

What makes the Danube so special?

Stretching 2,850 km, the Danube is the second longest river in Europe, connecting ten countries with very different cultures – more than any other river in the world. The Danube is the only major river in Europe that flows from west to east. On its way from Germany to the Black Sea, its waterbody changes shape and type, which not only makes it exciting in its own right, but has also shaped the towns and natural environment around it. This applies especially to the towns that sprung up due to their proximity to this important trade route. Once oriental luxury goods started to be imported – furs from Russia, silk from China, spices from India – it only took a few generations for Regensburg, for example, to emerge from the 12th century as the most important trading city in southern Germany.

The Stone Bridge and cathedral are Regensburg's most important landmarks. Photo: Peter Ferstl

This is still reflected today in the Old Town of Regensburg, which has been a Unesco World Heritage Site since 2006. A substantial amount of its medieval city has been preserved, with a wealth of buildings from the 12th to 14th centuries. It has the largest coherent collection of Romanesque and Gothic architecture north of the Alps as the World Cultural Heritage site in Regensburg extends over 183 hectares and encompasses about 1,000 monuments. Anyone interested in architecture and culture will want to stay here for more than just a few days. Located on the 12th-century Stone Bridge on the banks of the Danube, the World Heritage Visitor Centre is the perfect starting point for an initial overview of the city. The free parking spaces at Dultplatz are ideal for parking your motorhome or campervan for the day. You can easily get to the Old Town from here on foot. If travelling with a caravan or if you want to stay over night, you can also park your motorhome or caravan at the AZUR Camping Regensburg campsite. 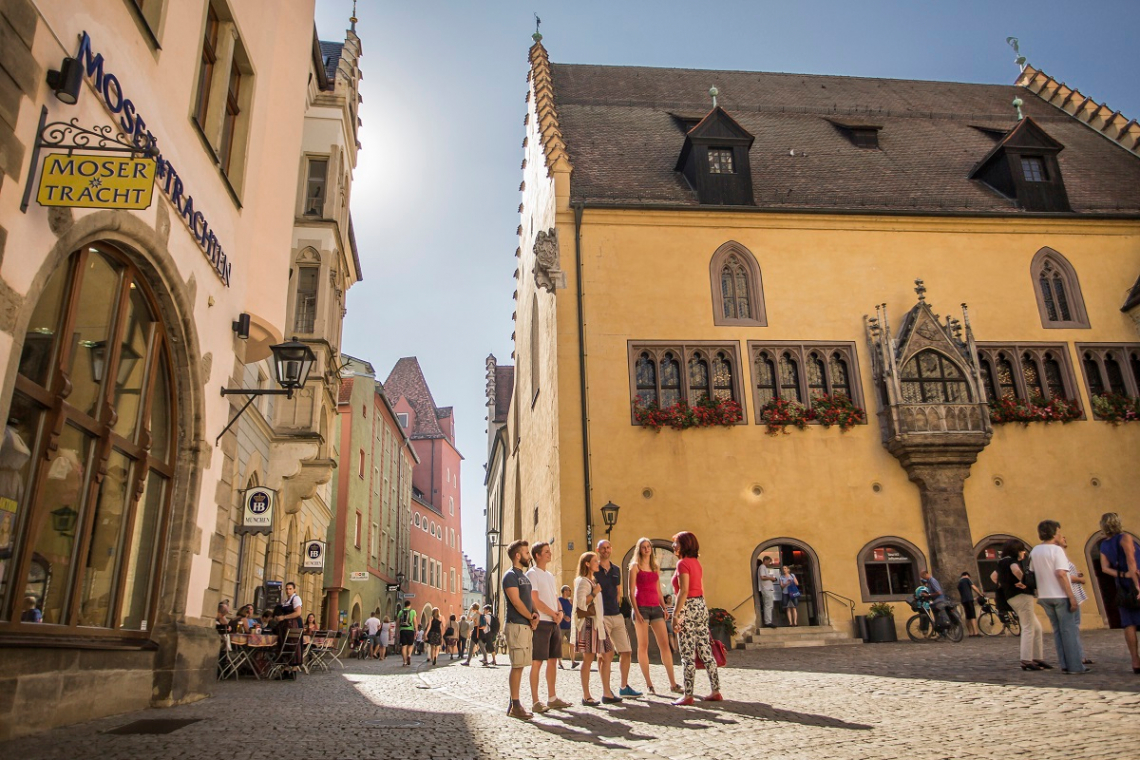 Start your tour of Regensburg in the World Heritage Visitor Centre and you can also enjoy one of the city's top sights right in front of you: the Stone Bridge. Its construction began in 1135, and it is considered to be the oldest surviving bridge in Germany. This masterpiece of medieval architecture links the Old Town with the Stadtamhof district, which is also a World Heritage Site, and is an important landmark. As is Regensburg Cathedral, which is at the centre of the World Heritage Site and is one of the most important Gothic buildings in Bavaria. By contrast, the Golden Tower in the Old Town is an outstanding example of patrician architecture in Regensburg. This "patrician tower" from the second half of the 13th century is 50 m high. The old Town Hall tower, also dating from the 13th century, represents a completely different aspect of Regensburg's history. Today it is part of a three-part building complex consisting of the Town Hall tower and neighbouring palace, the Gothic Imperial Chamber and the Baroque town hall. This is also where the Imperial Assemblies convened by the emperor took place from 1594 onwards. More information about the Regensburg World Heritage Site is available here. 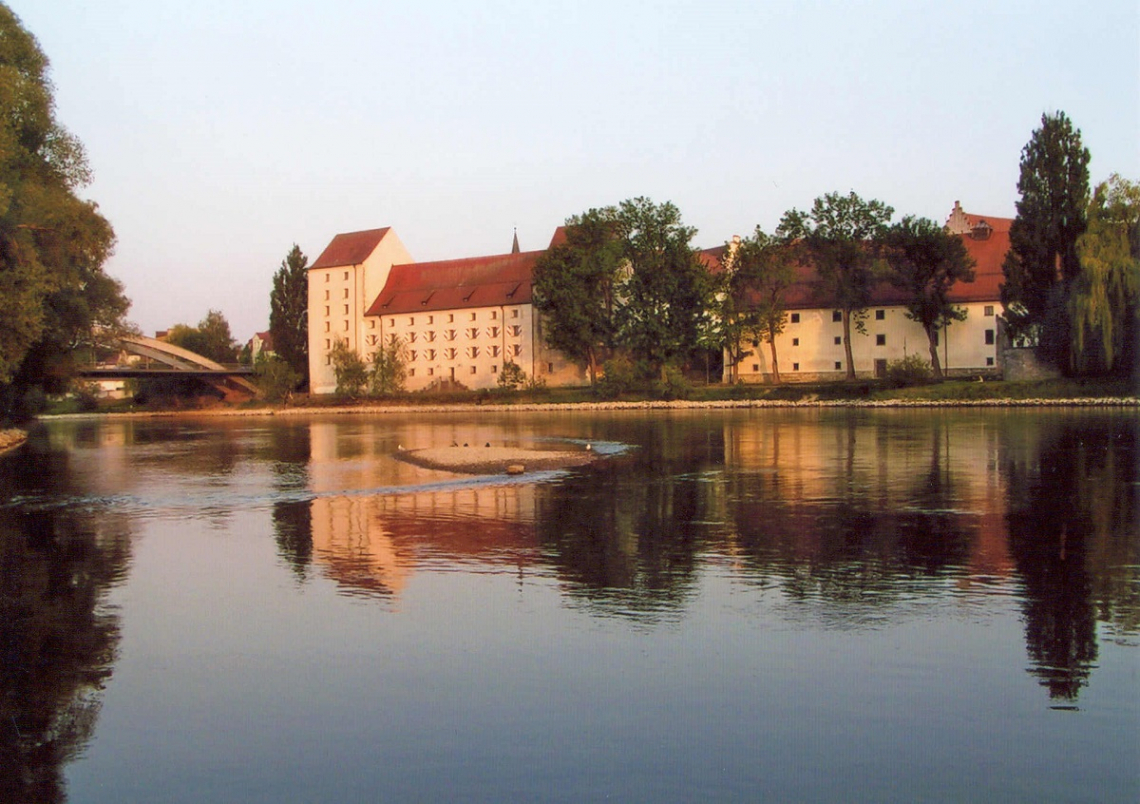 The Ducal Castle in Straubing is located right on the Danube. Photo: Amt für Tourismus Straubing

History and culture galore in Straubing

Located less than 50 km southwest of Regensburg, the city of Straubing ultimately owes its existence to the Danube – and that since about 5600 BC. Elaborately decorated armour, delicate pieces of jewellery and bright red festive tableware in the Gäubodenmuseum give an insight into Roman life in Straubing. And where the Celts, Romans and Bavarii once lived, now stands St. Peter's Church, inviting you to visit its historic cemetery, the Romanesque basilica and the three Gothic chapels. Incidentally, you will also find a rather tragic link to the Danube here: a memorial chapel for Agnes Bernauer. She was the wife of Albert III, Duke of Bavaria. However, his father deemed their relationship inappropriate, accused her of witchcraft and had her thrown into the River Danube in 1435. The Agnes Bernauer Festival is staged in the courtyard of the Ducal Castle every four years and commemorates her life as well as the love between herself and Albert III. The next festival will take place in 2024. 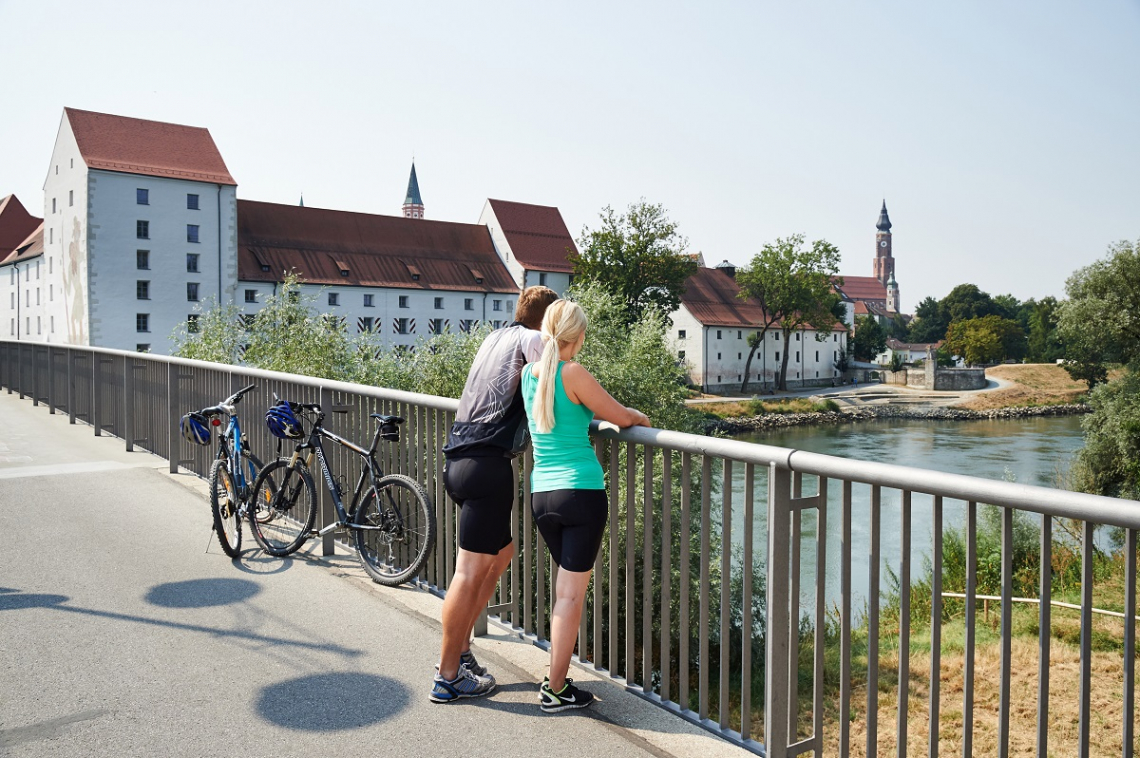 Straubing is ideal for sightseeing and bike tours along the Danube. Photo: Tourismusverband Ostbayern

The Ducal Castle is located about 1 km west of the prehistoric settlement right on the banks of the Danube and on the outskirts of the 13th century medieval city. The buildings in the Old Town, including its Gothic City Tower (Straubing's landmark), the baroque Church of St Ursula, two late Gothic hall churches, early baroque fountains, mighty patrician houses and richly decorated facades, have many tales to tell of the town's eventful centuries-old history. The daily vegetable market here and the farmers' market and "Viktualienmarkt" held on Ludwigsplatz every Friday and Saturday continue a centuries-old market tradition. You can discover all these sights and their relationship to the Danube either on your own or on a guided tour of the city. The Gäubodenmuseum, St Peter's Church and the Basilica of St Jacob and St Tiburtius also offer guided tours.

A boat trip to discover Passau from the water is practically a must. Photo: Passau Tourismus e.V.

The Danube is not the only river in Passau

The last highlight along the Danube in Germany awaits travellers about 90 km southeast of Straubing: the city of Passau. Its Old Town juts out into the water on a promontory, which alone testifies to the importance of the waterways for the city's former trading activities – the Danube joins two other rivers, the Inn and the Ilz, here. They all play a part in making the Danube glisten in three different colours for the next few kilometres. The best way to observe this unique backdrop is by taking a “three-river city tour” by boat and learning more about the city's history on board. 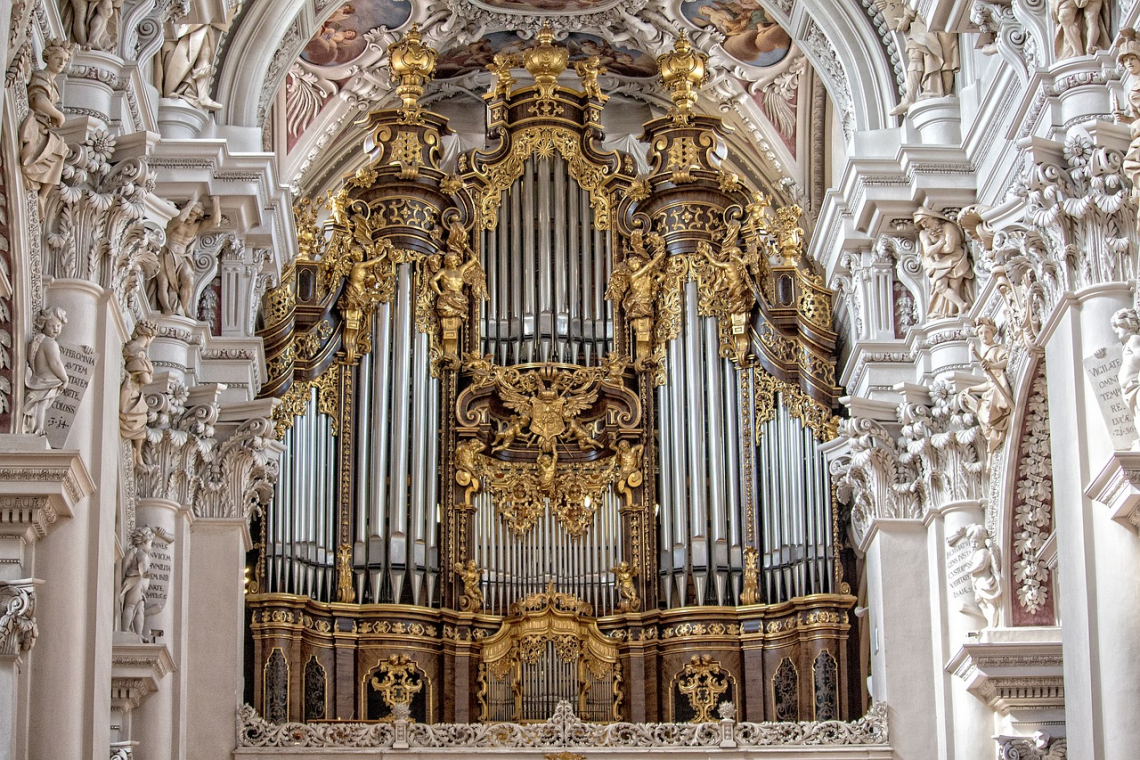 The largest church organ in the world is located in St Stephen's Cathedral in Passau. Photo: Pixabay

As Passau is located on the Austrian border, the European concept has grown organically here over the centuries. This cosmopolitan spirit blossoms every June to August when the “European Weeks” music festival takes place. Moreover, visitors can enjoy a cross-border boat trip from Passau to Engelhartszell or Linz in Austria through the impressively green Danube valley. Depending on the season, you can go on an evening boat cruise or day trip on the Crystal Ship, which is adorned with millions of Swarovski crystals – worth it just for this sight alone. There is obviously a lot to discover on land in Passau as well, e.g. St Stephen's Cathedral with treasures from a time when Passau was still the largest diocese of the German Kingdom/Holy Roman Empire.