Back
Camping holiday between two seas in Denmark 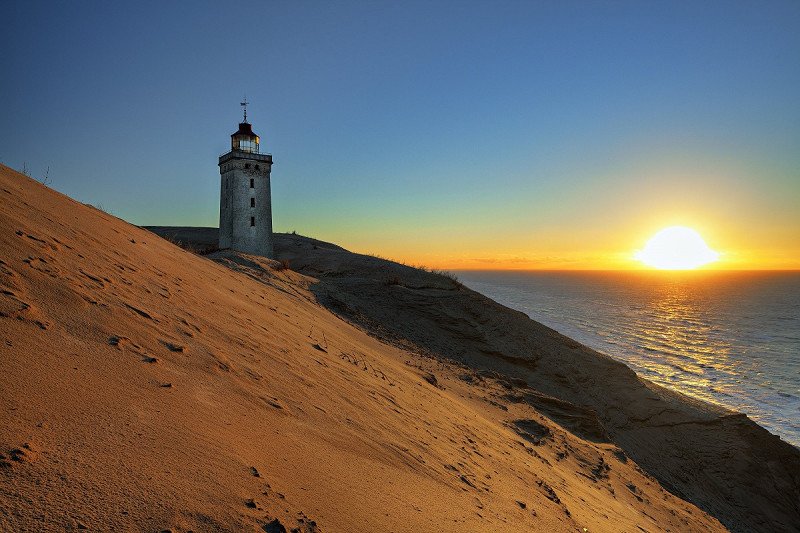 The name Lysets Land or in English Land of Light stands for the northernmost corner in Denmark. The name was influenced above all by the many artists who came here in the 19th century. Even today, the region between Skagerrak and Kattegat still exudes a special atmosphere that can be wonderfully enjoyed during a camping holiday with your caravan or as part of a motorhome tour to Northern Denmark. 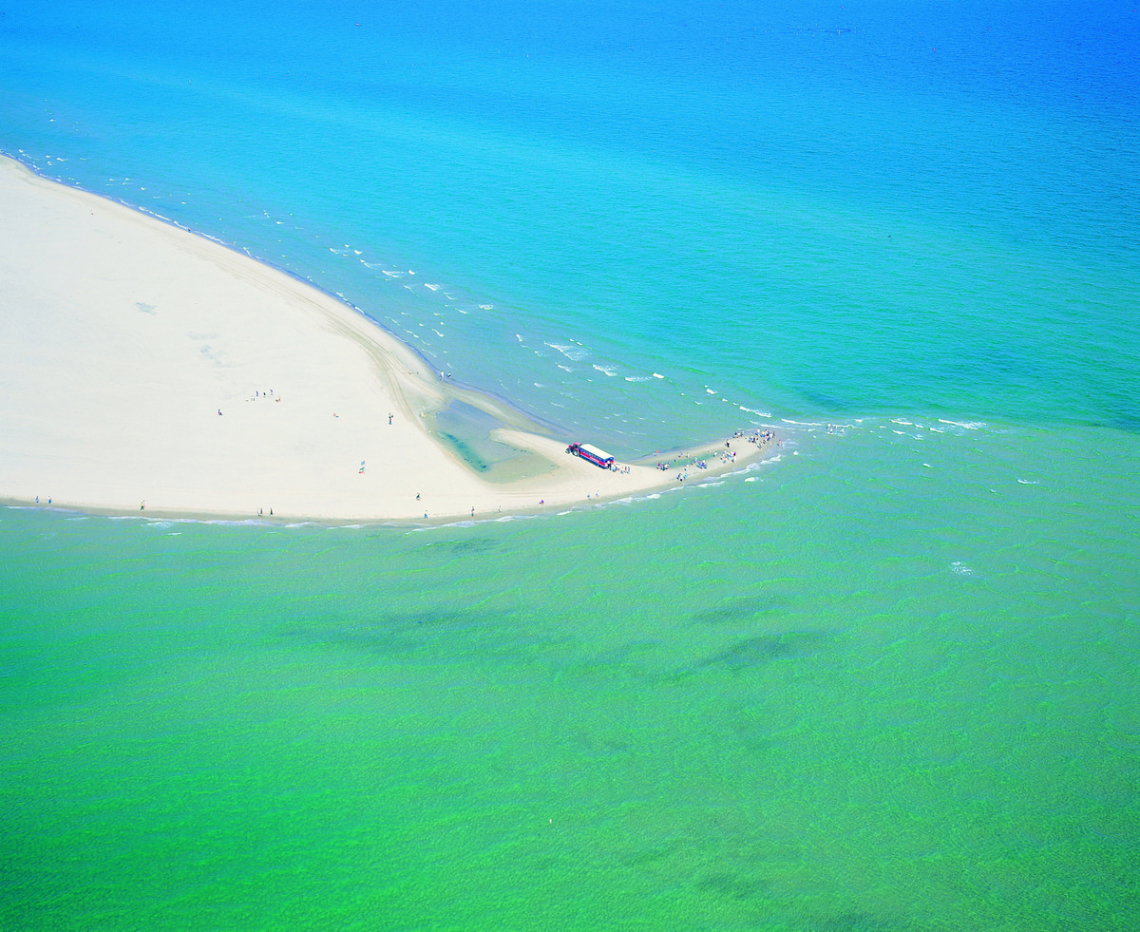 The fascination of Skagens Gren

You can't go any further. With one foot in Skagerrak and the other in Kattegat, at the headland Skagens Gren Denmark comes to an end. Depending on the weather conditions, the waves of the two seas meet here clearly visible - sometimes with roaring sounds, sometimes in a gentle hug. Also, Skagens Gren never looks the same. It changes constantly due to the current conditions: sometimes the tip turns to the northeast, then to the east again and sometimes even to the southeast. But it actually never points to the north, even if most tourists believe just that. At the same time, the headland continues to grow. In the 1880s and 1890s, when more and more artists discovered this picturesque coastal landscape, Skagens Gren actually was about a kilometer shorter than today. 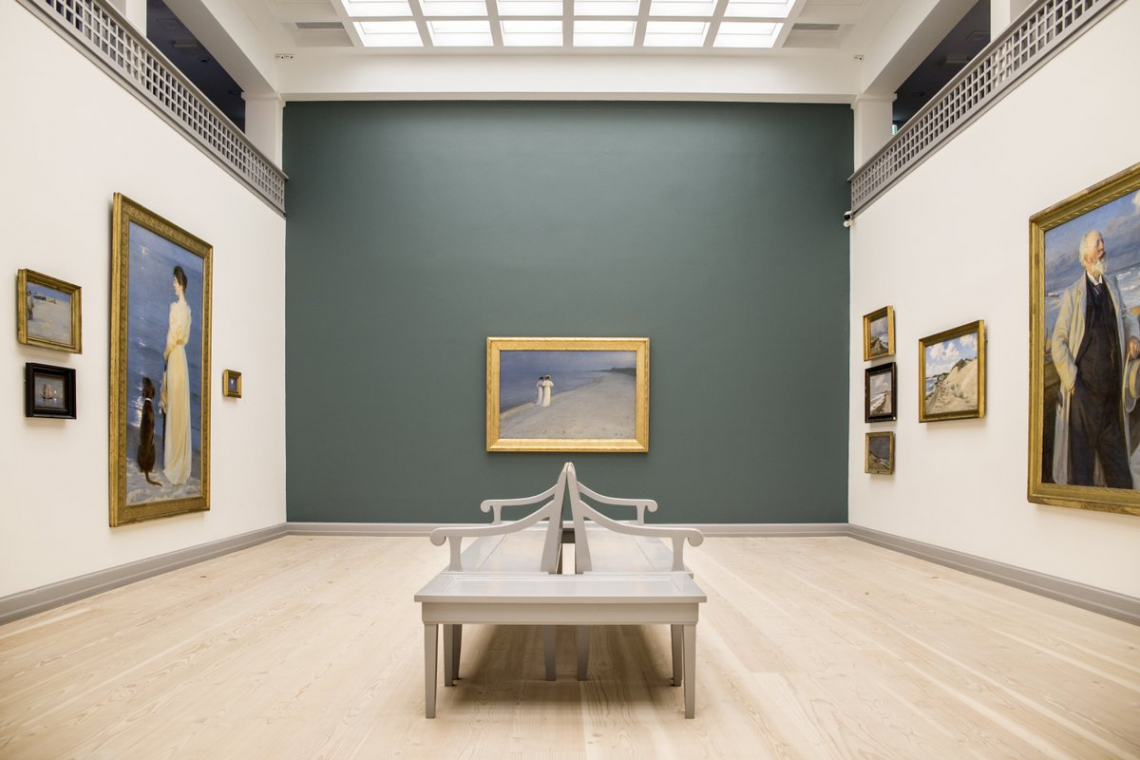 The Skagen painters are an essential cultural component in the north of Denmark. Photo: Skagens Kunstmuseer / Visit Denmark

Tip for those interested in culture: The Skagen painters in Skagen's museum

At first it was mainly the painters who came to the far north of the region North Jutland because of the special lighting conditions. Following the example of the French Barbizon School, they had dedicated themselves to open-air painting and as a consequence made the then fishing town of Skagen internationally the most famous artist colony in Denmark. Well-known names such as Holger Drachmann, Oscar Björck, PS Krøyer, Marie Krøyer, Christian Krohg as well as Michael and Anna Ancher have left a lasting impression on the region. With their naturalistic and sometimes also impressionistic means of art, they over and over again captured the seemingly endless, white sandy beaches, the sea in all its facets and the fantastic dune landscape in oil.

In fact, some of the works that can be seen in the Skagens Museum, which the artists founded themselves, could date from today. Admittedly, the clothing of the people depicted in the paintings clearly dates from the turn of the century. But the delicate wildness of nature around has lost little of its charm since then. Even today, you can still take wonderful long walks on the beach, build large sandcastles and take extensive baths in the sea - except at Skagens Gren, which would be too dangerous. 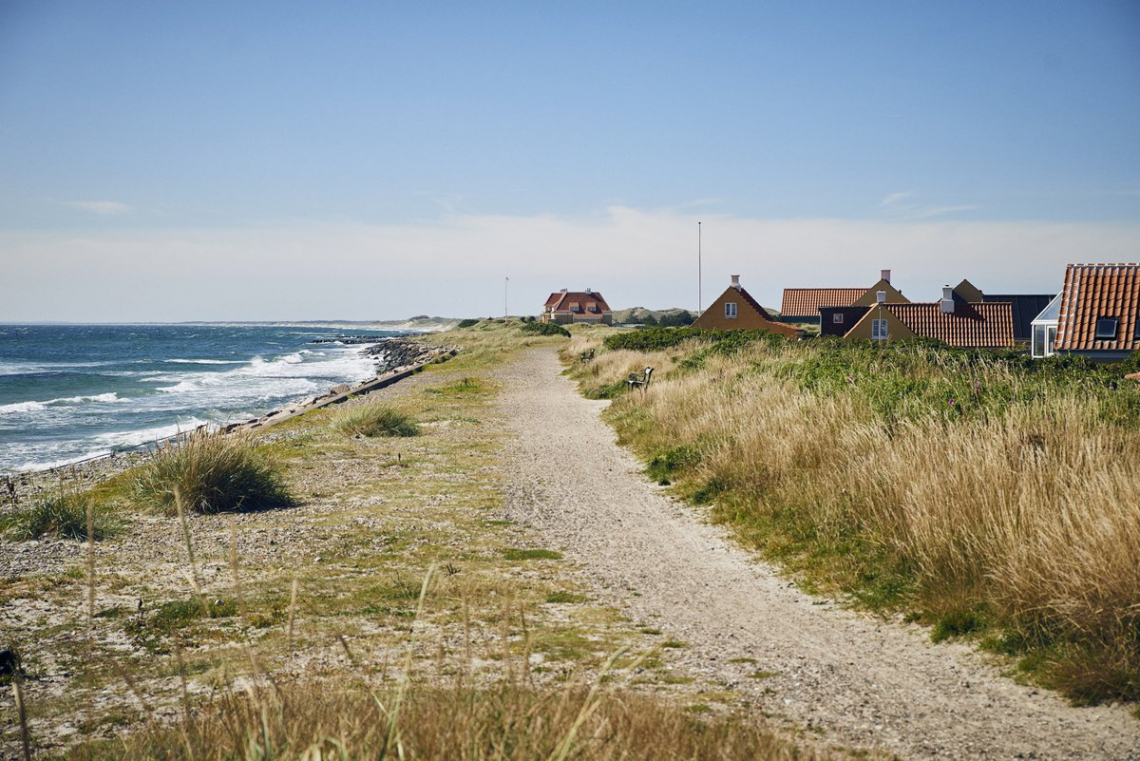 Day trip to Skagen - a must in the north of Denmark

Nevertheless, the so-called Skagen painters not only immortalized the romantic landscape idyll in their works, but also the hard and risky life of the fishermen. Around the turn of the 19th Century they were still represented in large numbers in this area. In Skagen itself there is hardly any trace of that today. With its picturesque houses and alleys and its location between the two seas, the small town has developed into the region's tourist landmark. In summer there is hardly a quiet place to be found and the price level is more aimed at people who do not really care how much money they are spending. In terms of price, this is sometimes also noticeable at the campsites in Skagen. Most campers and holidaymakers therefore prefer to stay in one of the lesser known places on the west or east coast and go to Skagen just for a daytrip. Those smaller places are for example Tversted, Hirtshals, Løkken, Sæby or Aalbæk which all also have long sandy beaches, extensive dunes, clean water, artists and handicrafts and above all much more peace. 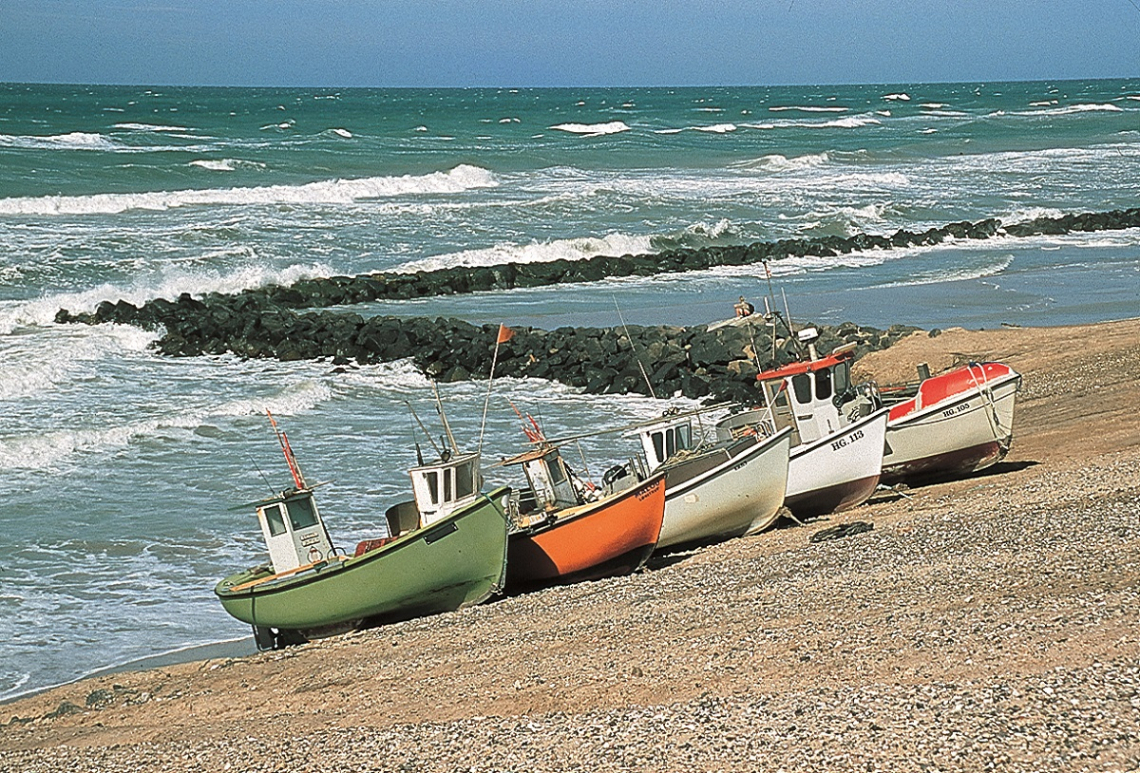 The fishermen from Lønstrup still pull their boats onto the beach as they did a hundred years ago.
Photo: Toppen af Danmark

Another place to visit absolutely is the beach of Lønstrup. It's a bit like a seldom visit to the past. You can watch the fishermen pull their boats onto the beach after returning from their catch and have a little talk with them - just the way it has been done here for generations. And if the catch was good, they also sell clods, dabs or snouts directly from the boat. The fishermen from Lønstrup do their job as sideline and only with small boats, because the beach actually has risen so much over the past 100 years that large, profitable boats cannot be used here anymore. The professional fishermen have therefore moved to Hirtshals over the years, where larger fishing cutters can dock and there is always a lot going on in the harbor.

In September 2018, the Rubjerg Knude lighthouse was completely cleared of sand, but was already close to the cliffs. Photo: Bert Wiklund / bwfoto.dk

Have a look at the new old Rubjerg Knude Fyr

Perhaps the most fascinating thing in the land of light is nature, which demonstrates its power over humans every day anew. Because on the one hand the sea on the west coast tears away a few meters of land every year and on the other hand the wind throws up mighty dunes here that migrate towards the northeast. The best example of this is the lighthouse Rubjerg Knude Fyr to the south of Lønstrup. Over the past decades, there were times, when it was almost completely buried by a huge shifting dune named Rubjerg Knude as well. When the Lighthouse was built in 1899, it was located about 200 meters from the coastline. In 2019, the edge of the cliff only was a few meters away and it was predicted that the lighthouse would fall off the cliff in 2020. Therefore, the Danish government decided in autumn 2018 that the lighthouse should be moved about 70 meters inland - a unique and spectacular rescue mission which successfully took place in October 2019. The idea actually came from the local bricklayer Kjeld Pedersen who did not want to see the lighthouse demolished. Thanks to him, visitors now can enjoy the fantastic landscape view from the lighthouse for approximately another 35 to 40 years. Have a look at the video below! 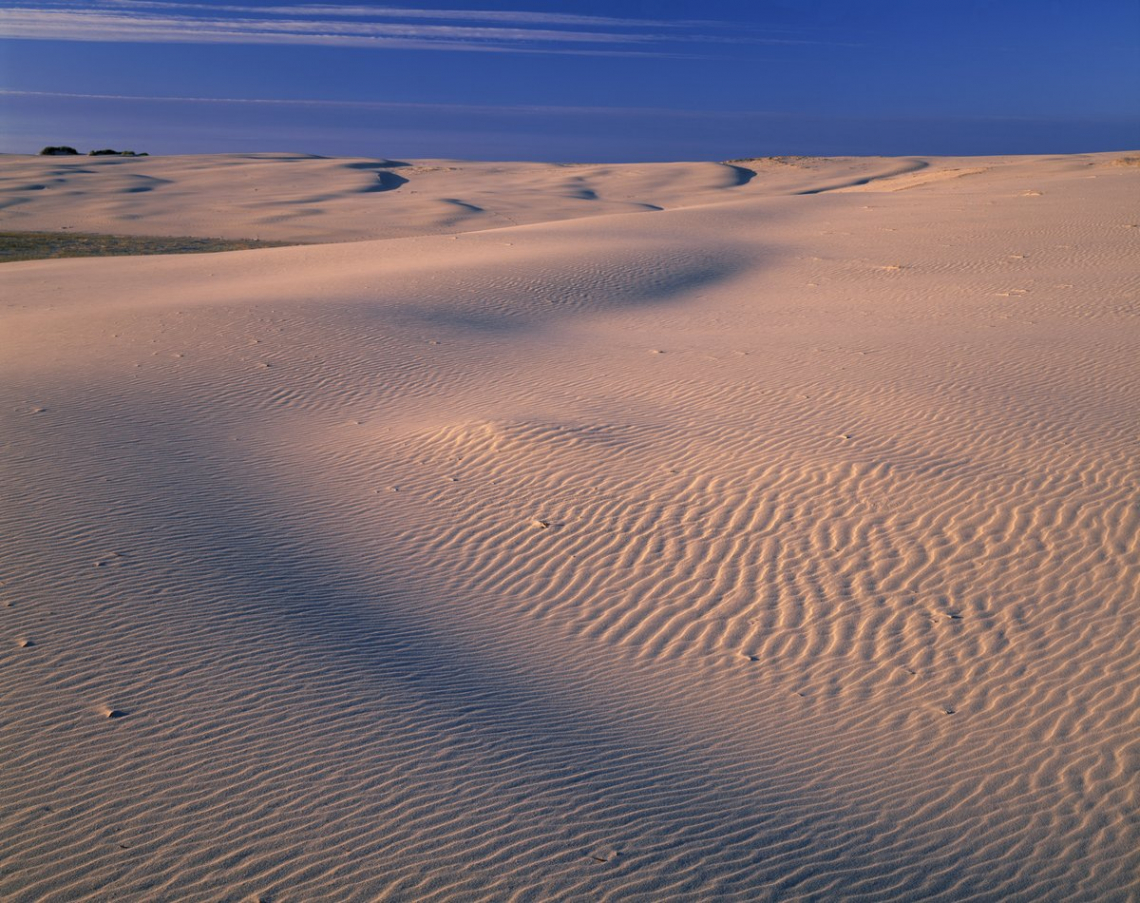 Another top attraction in Denmark is Råbjerg Mile. It is Denmark's largest shifting dune, which can be admired and hiked on a few kilometers north of Tversted in the direction of Skagen. Råbjerg Mile covers an area of approximately one square kilometer, is up to 40 meters high and moves approximately between 15 and 30 meters per year in an east-northeast direction. This means that the main road to Skagen will have disappeared under tons and tons of sand in about 100 to 200 years. Add another 40 years and the dune will have moved on and set the road free again. And some day after that, the dune most likely will have disappeared in the Kattegat. And if you want to see another remarkable thing: In the middle of the dune forest of Tversted there is a thatched barn, a remnant of the Østerklit farm. A mill towers on its roof, the last functioning floor mill that still exists in Denmark.