Back
Camping holiday at Hvidbjerg Strand in Blåvand 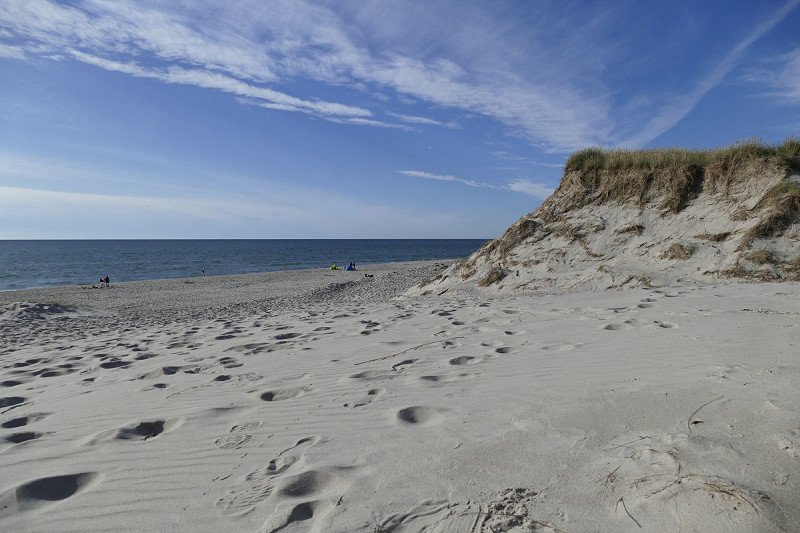 Denmark is a popular travel destination for campers - and there are a number of good reasons for this. As a beach holidaymaker in Denmark you have the choice between the Baltic and North Sea. On the latter you will find one of the most beautiful beaches in the country: Hvidbjerg Strand in the area around Blåvand in the municipality of Varde. Here you will not only find a wonderful campsite right on the seemingly endless beach, but also a lot to discover in the area. Wouldn't that be an idea for next summer?

6 stars for a campsite

There are many beautiful campsites on Denmark's North Sea coast - but how about something very special? The campsite Hvidbjerg Strand Camping near Blåvand belongs to the holiday park of the same name and not only offers a direct connection to the sea and the dunes, but also a lot of additional options. After all, the campsite did not get its six stars for nothing. In addition to the usual standard pitches, the offer ranges from six other categories and price ranges to XL luxury pitches with space for two caravans, a private bathroom and an outdoor spa.

Campsite guests also have free access to the adventure pool, trampoline land and a large indoor play area throughout the season. Anyone over the age of 16 can also enjoy the wellness center for three hours a day from Monday to Thursday free of charge. If you don't have your own mobile home or caravan, you can also rent special themed huts here. These include, for example, fishermen's huts that stand on stilts in the water, Wild West huts or the so-called Hvidbjerg huts, which exude a modern Scandinavian flair.

In addition to the accommodation, the campsite also offers a whole range of leisure activities in the immediate vicinity. The perfect starting point to explore the region.

Excursion to the westernmost point of Denmark

Blåvand lighthouse is one of the region's great landmarks, although the lighthouse is not that old yet. It was only put into operation in the year 1900. The best way to get from the campsite to the lighthouse is by foot or by bike. It only takes a quarter of an hour to get to the lighthouse from the beach by bike, and you can comfortably cycle along the coastal road. It takes about an hour to walk. And while you are already there, you should of course not miss the opportunity to take a look at the inside of the building. There are around 170 steps to climb to reach the top but it really is worthwhile: at a height of 39 meters you have a great view over the coast. In good weather conditions, you can even see the offshore wind farms. Also hobby photographers get their money's worth here, especially at sunset. Those interested in the history of the lighthouse will get more information in the attached museum, which is set up in the former apartment of the lighthouse keeper.

The lighthouse Blåvandshuk Fyr is the westernmost lighthouse in Denmark and is not only a great photo opportunity at sunset. Photo: Adobe Stock, © niemannfrank

The Tirpitz Museum, which was newly opened in the summer of 2017 southeast of Blåvand, is another eye-catcher from an architectural point of view and a great photo opportunity. It can be reached on foot in less than one hour from Hvidbjerg Strand. This gives you the opportunity to combine a hike through a wonderful dune landscape with a fascinating history excursion and outstanding architecture. The Tirpitz Museum was created by the famous architecture firm Bjarke Ingels Group, which over the past years often has caused a stir with its spectacular buildings and the Tirpitz Museum is no exception in this regard. The spectacular thing about the Tirpitz Museum, however, is that on first glanece it looks completely inconspicuous and is barely visible. It is hidden under the sand of a protected dune landscape in Blåvand, so to speak. The modern building, which houses a mixture of nature and local history museum, is connected underground with a bunker from the Second World War. It is a remnant of the so-called Tirpitz Battery, which was supposed to be built as part of the German Atlantic Wall, but was never completed.

The Tirpitz Museum was sunk under an accessible dune, so to speak. From the outside, almost only four paths can be seen that cross the building and form an extension of the natural dune paths all around. Photo: Claudia Rothkamp

The exhibitions inside the Tirpitz Museum are definitely also worth a visit. In four different permanent exhibitions, stories are told with interactive and multimedia features about the everyday life on the west coast - for example camping life in the 1970s -, about life in the shadow of the Atlantic Wall during World War II, and about the amber found along the coast. In the historic bunker to the South, which was largely left to its own devices, there is still the feeling of goose bumps: the moisture in the gloomy concrete walls paired with the musty smell and various sound effects almost create a spooky atmosphere. One really is not ungrateful when climbing back out into the sun and the wonderful dune landscape.

In the West Coast Stories exhibition, the exhibition space is transformed into a huge projection surface with associated sound effects every 30 minutes. Photo: Claudia Rothkamp

Tip for beginners: surfing in Blåvand

That Denmark is a surfer's paradise is well known in Europe. But at Hvidbjerg Strand even beginners will get their money's worth, because here they will find perfect conditions to simply start their first attempts at surfing: there is a lot of space and you don't have to expect really big waves. Even the sometimes very strong wind is not a problem here. In addition, you can virtually mount your board from the motorhome or caravan - after all, the beach is right around the corner. However, as always when surfing, you should keep yourself informed about the tides. Because depending on the water level, your own surfing behavior must be adapted.

Art on the beach: the somewhat different seahorses

If you want to treat yourself to some other kind of art, you should also make a detour to Bill Woodrow's Fredsskulptur (translated: Bill Woodrow's Peace Sculpture). It is another landmark of the Varde region and is located just a few minutes northwest of the campsite. Here the relics of the Atlantic Wall are still present. On the occasion of the 50th anniversary of the liberation of Denmark in 1995, the English artist Bill Woodrow turned some of the bunker remains on the beach at Blåvand between Skippervej and Lille Strandvej into mule sculptures. He mounted large metal mule heads and tails on four of the bunkers on the beach. The underlying symbolism: mules are sterile and cannot reproduce. On the beach of Blåvand they were installed as a memorial for the wish that the bunkers should never multiply again either. The sculptures are a real attraction and popular photo motif - especially at high tide when they partially disappear in the North Sea. 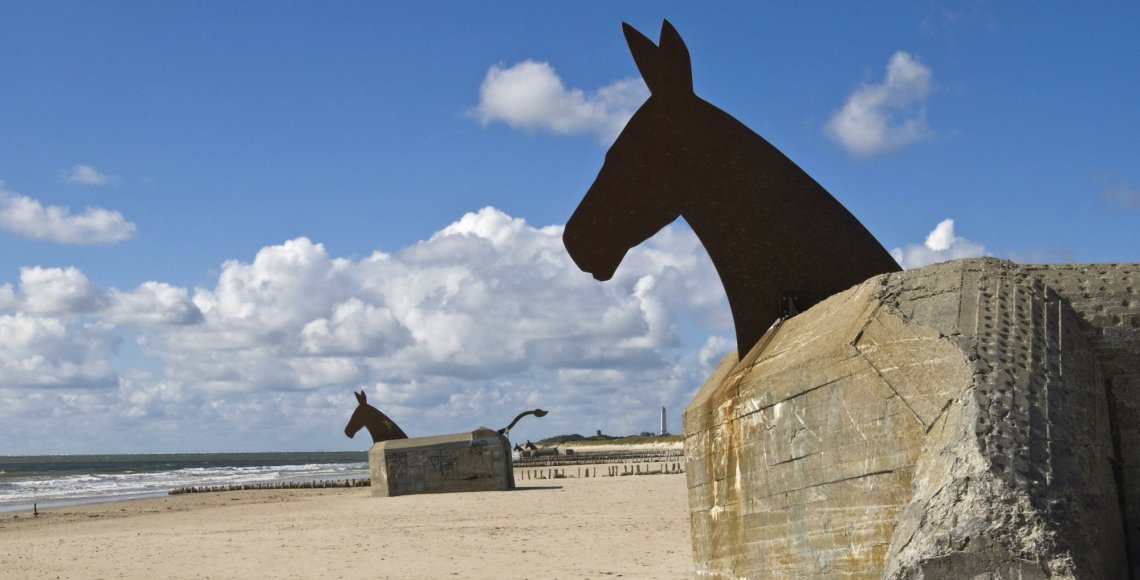 A memorial in history: like mules, the bunkers on the beach at Blåvand should no longer be able to multiply. Photo: Adobe Stock, © imageBROKER

A little relaxation at the end

Even those who would like to allow themselves a bit of deceleration with so many activities in the region have come to the right place at the Hvidbjerg Strand campsite. After all, there is also the wellness center of the associated holiday resort with its approximately 1,200 square meters for wellness and relaxation. In addition to a variety of steam baths, saunas and pools, wellness treatments are offered as well. This includes, for example, massages, but also facial treatments and health treatments for couples. What a great mix of sightseeing, activity and relaxation!