Back
Arctic wellness experience in Finland

Whether it's a nocturnal dog sledge tour on the hunt for the Northern Lights, a reindeer sleigh ride, cross-country skiing and snowshoeing tours, saunas and ice bathing or cultural insights – winter camping in Torassieppi and Harriniva in Lapland in northern Finland gives everyone the freedom to find and live out their own definition of an "Arctic wellness experience" under the aurora borealis. This wintry wonderland has everything you need for all this from February to mid-April. 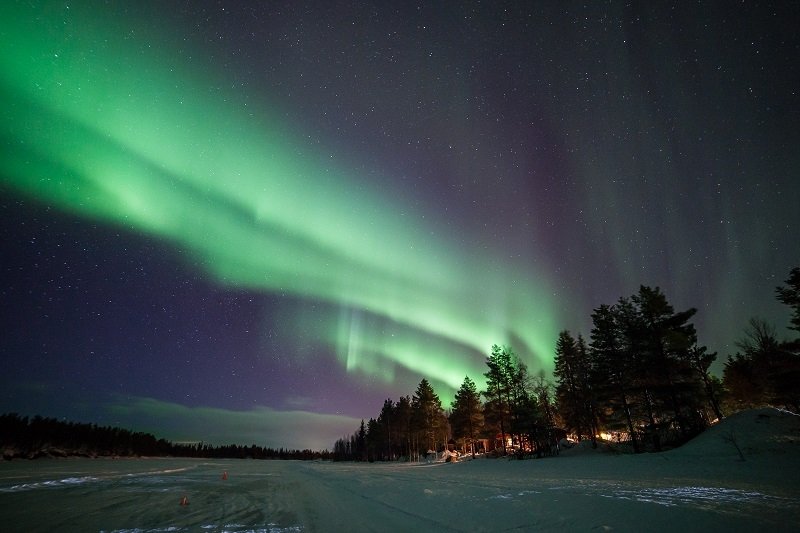 The less stray light there is, the easier it is to observe the aurora borealis. © Harriniva

If you suddenly see everyone in the restaurant in Torassieppi frantically grabbing their jackets and snow overalls and leaving their food on the table without a thought, there can only be one reason: the Northern Lights are dancing in the night sky. So, go and put on your warm clothes, get your camera and tripod ready and head out to the frozen Lake Torassieppi. After all, this is exactly why most of the guests in this small northern Finnish winter village have come to Lapland: to experience the magical light of the aurora borealis live (the official name of the Northern Lights). And the small lakeside cabin settlement offers the ideal conditions: surrounded by the wilderness, there is hardly any disturbing extraneous or stray light – apart from maybe the (head) torches of the photographers playing around with their camera settings. 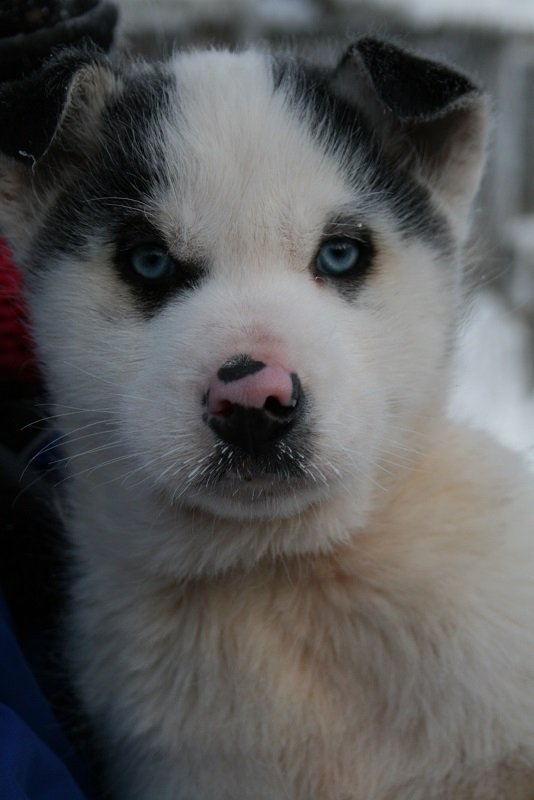 Dog sledge puppies are not allowed to go on tour yet, but they are just as loud as the rest of the pack. © Claudia Rothkamp

Speeding through the night with a dog sledge, hunting for the Northern Lights

But if you're looking for more adventure, then go hunting for the Northern Lights in the dark with a dog sledge. Because a dog sledge tour, where your head torch is the only source of light, tops an "ordinary" dog sledge tour. And don't expect these canines to be more tired or calmer later in the evening than during the day. Quite the opposite! As you approach the husky farm, which is in the deep forest of Lapland about 1 km from the lake, you will be met by a lot of excited barking from numerous dogs.

A good 70 huskies are housed here in the kennels. You now also start to feel a little excited, in case you weren't before. And somehow, while the musher is introducing the participants to this sport, you start to wonder how you are actually supposed to see the hand signals in complete darkness in time. Not at all, as it turns out after riding for a few metres – and this also applies to the curves. Thus, you quickly realise that keeping your distance is the order of the day. Accordingly, you hold back on speed during the first kilometre towards the banks of the lake, which means it gets even darker around you. The large spruce and pine trees surrounding you on all sides look almost eerie. But that doesn't seem to bother the four huskies at the front of the dog sledge. They would like nothing more than to dash through the tight corners without slowing down and keep up with the others. 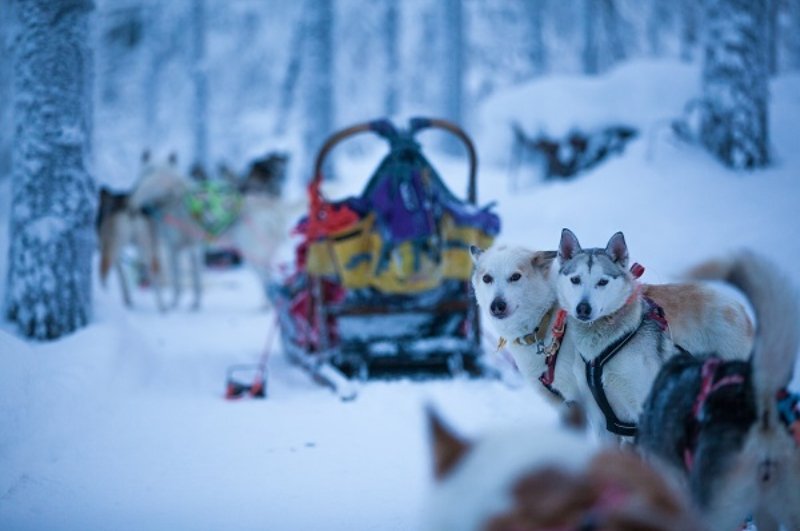 A short blue hour before darkness settles over the landscape. © Harriniva

After reaching the banks of the lake, the huskies get their own way at long last: foot off the brakes and full throttle across the thick frozen lake in the middle of Lapland. A crazy feeling, but you finally start to relax a little. One look at the cloudy sky destroys any hope of seeing the Northern Lights over the lake. That would have been too easy. So the hunt for a free patch of sky gets underway as the aurora borealis is active that evening. We can only guess what is behind the blanket of clouds. Once they reach the other side of the lake, they start to criss-cross through the forest and at some point – literally and out of necessity – the passengers start to trust the four huskies blindly, who continue to pull the dog sledge through the night, full of motivation. True to the motto "because they already know what they are doing", you just let them run. Once this trust has been established, you can really enjoy the night tour – with or without the aurora borealis as it is still hiding above the clouds. After about two hours of "hunting" and hard work, the huskies have earned their rest at the kennel. Even though the camera stayed in the backpack the entire time, it would probably have been impossible anyway to get the lively canines at the front of the dog sledge and the Northern Lights in one picture. However, you might have more luck with reindeer – aurora borealis tours with reindeer sleighs are also offered in Torassieppi for those who prefer to take it easier. 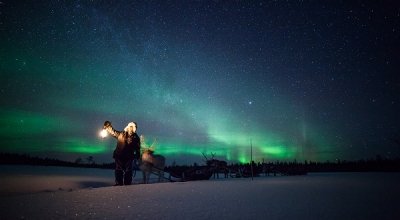 A reindeer sleigh ride and the aurora borealis. © Harriniva 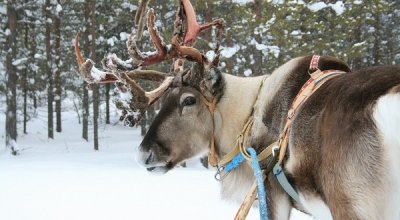 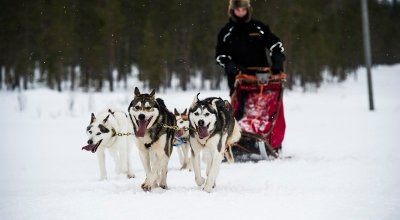 Unfortunately, a nocturnal dog sledge tour is not really suitable for photos, so you have to leave it to your imagination... © Harriniva

The corresponding reindeer farm, whose roots go back to 1847, is just a 10-minute walk away. The reindeer guide Jussi has around 20 reindeer here, with whom he goes on tour during the day or in the evening – he also has "apprentices" taking part in the training programme that lasts at least 3 years. And this seems to be necessary. These deer may seem to be calm and gentle at first, but they can take to their heels even with a sleigh if they want to – up to 70 km/h!

What's more, all of the working reindeer are castrated, but no longer in the traditional way, which Jussi regrets, "In the past, the testicles were simply bitten off, but today we have to comply with EU regulations and use special forceps, which I think is more painful for the animals." You can admire them and other traditional tools in the former home of the original owners of the farm, which today serves as a small museum. Half of it dates from the 19th century. Because inheritance disputes here in Lapland were apparently dealt with just as much pragmatism as castration was: after two brothers who had fallen out couldn't agree on which of them was allowed to stay in the house, it was simply sawn in half. And while one half remained where it was, the other half was taken apart, transported away and rebuilt on the opposite bank of the lake. 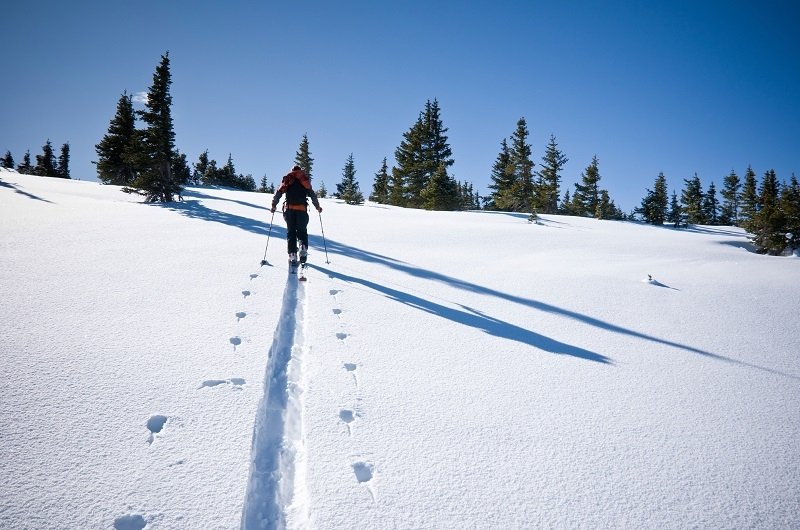 The area offers numerous opportunities for outdoor activities in the snow. © Harriniva

Active if and when you like with snowshoes, cross-country skis or a snowmobile

If you strap on snowshoes or cross-country skis and put on really warm snow overalls, winter boots and gloves, all of which you can borrow in Torassieppi and Harriniva, you won't be able to find the second half of the house on the other side of the lake today. Instead, there are kilometres of paths and groomed trails in the Lapland forest, which you can explore on your own. About 250 km of cross-country trails are available in the area around Muonio, which is only 16 km away. This idyll is sometimes disturbed by snowmobiles or dog sledges, which of course are also out and about during the day. And if you want to be even more active, there are ski trails of different lengths in the nearby Pallas-Yllästunturi National Park, which can even take several days to complete. Guided snowshoeing or cross-country skiing tours are also offered in Torassieppi – as is ice fishing for those who prefer a more leisurely pace. 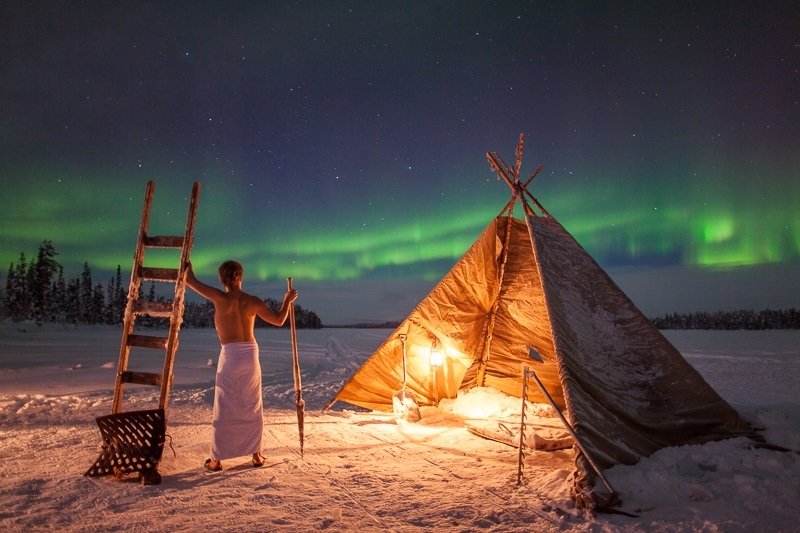 A must in Finland: an icy swim in the lake after a sauna. © Harriniva

And while we're on the subject of relaxing ice holes, we can't overlook ice bathing. After all, what would an Arctic wellness experience be without sweating in a real Finnish sauna and then cooling off in the lake? Needless to say, there is a small sauna right by the lake in Torassieppi to relax your muscles after the day's activities – including an ice hole for the brave. Others might be content to just roll around in the snow in front of the house.

Swimming with a hat, gloves and socks on – that's what the Finns do in winter.
© Claudia Rothkamp

Tips for ice bathing on a wellness holiday

If you want to treat yourself to a sauna afternoon, make a detour to Jeris, the sister hotel, which has a small Arctic spa area. In addition to various saunas, there is also a heated hot tub and a 25 m ice-free area for swimming in the lake. And if you don't think you're courageous enough to go on this swimming adventure, then observe the seasoned Finns first. Because they know from years of experience how to avoid the soles of their feet sticking to the icy wooden planks or slipping on them when wearing bathing shoes. Trick number one: ignore your bathing shoes and just leave your woollen socks on. Your feet won't be warm, but it works. Trick number 2 does take a bit of getting used to: take a sauna with tights or leggings and socks on and then leave them on when you go into the water. And don't forget your hat and gloves!

Please check the opening times and restrictions due to the Covid-19 situation before visiting Harriniva and Jeris. Some areas might be closed and certain services only are offered to accomodated guests.

Getting there, when to travel, winter camping & accommodation in the north of Finland

The nearest airport is Kittilä Airport (62.5 km from Torassieppi). A number of airlines fly to Kittilä in Lapland. Alternatively, Rovaniemi Airport is about 200 km further south, which is also served from many European towns via Helsinki. If you want to travel to Lapland from mainland Europe with your own caravan or motorhome, you have several options: either completely overland or by ferry, e.g. from Travemünde to Helsinki, via Stockholm to Helsinki or from the northern Swedish city of Umeå to Vaasa in northern Finland.

If you want to enjoy the Northern Lights and try out various outdoor activities such as dog sledge, snowshoe, snowmobile and cross-country skiing tours, then Lapland is perfect from February to around mid-April. There is usually enough snow in the north of Finland at the end of April, but the evenings are too bright to see the aurora borealis.

The small winter village of Torassieppi is located in the heart of Lapland at Lake Torassieppi, surrounded by nature. It is made up of modern wooden cabins with a private bathroom and underfloor heating (the larger ones also have a kitchen, fireplace and sauna), restaurant, communal sauna and equipment cabin. Moreover, overnight glamping accommodation of a more exclusive kind is also available – there are a few Aurora Domes right on the shores of the lake. These are comfortably furnished panorama tents with a fireplace and an exclusive view of the lake and the Northern Lights.

Winter campers won't be disappointed by the Harriniva campsite. The Galdotieva campsite can be booked upon request, depending on snow and weather conditions in winter. 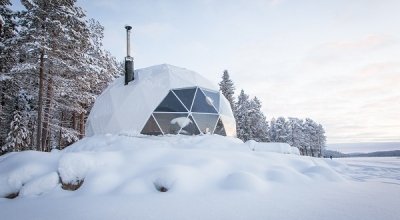 Glamping with a view of the frozen lake ... 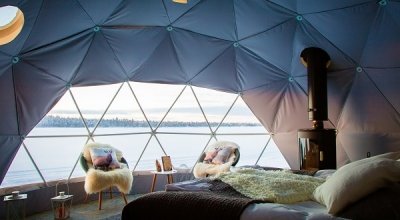 ... and with a bit of luck the northern lights at night. © both: Harriniva 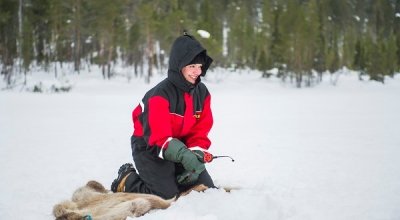 Ice fishing on the lake. © Harriniva