Back
The most beautiful Alpine passes and panoramic roads for motorhomes

The most beautiful Alpine passes and panoramic roads for motorhomes 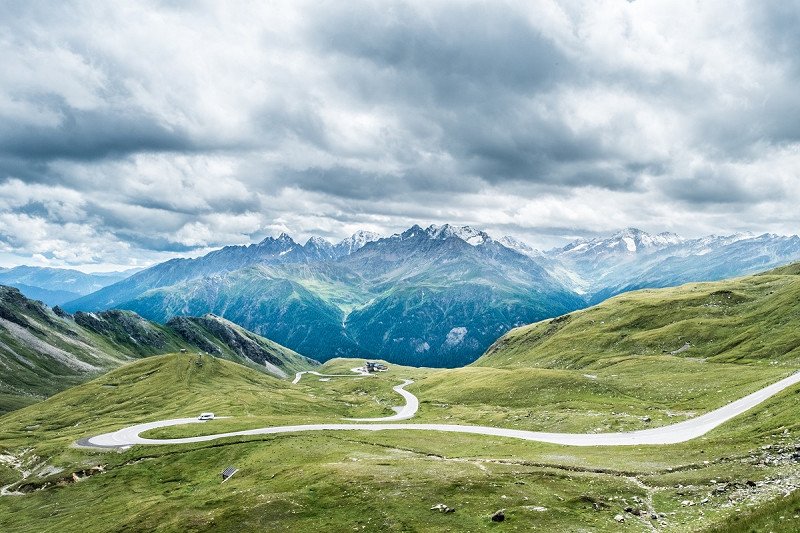 The most beautiful Alpine passes and panoramic roads for motorhomes

For some people it's the best feeling ever, for others a nightmare: Alpine passes with steep stretches, seemingly never-ending serpentines and tight bends. When it comes to the question of whether it would be better to drive in a campervan through the Alps over the mountains or through a tunnel, the opinions of motorhome enthusiasts are divided. If you haven't tried the former yet, the panoramic views are worth every mile! Freeontour presents five motorhome-friendly panoramic routes in the Alps.

Admittedly, this road will not take anyone over the Alps, but it does lead straight into the unique, high-alpine mountains of the Berchtesgadener Land and opens up wonderful panoramic views. The Rossfeld Panoramastrasse is Germany's highest panoramic toll road. It goes up to an altitude of 1,600 m and offers fantastic views over the Berchtesgadener and Salzburger Land on the high plateau. Let your eyes wander over the Salzach Valley, Salzburg, the Salzburg Alps, the Dachstein massif and the Totes Gebirge mountain range to the east; the Tennen Mountains and Hagen Mountains to the southeast; the Hoher Göll (2,522 m) and the Kehlstein (1,837 m) along with the Kehlsteinhaus (Eagles's Nest) to the south; the Berchtesgaden Alps with the Watzmann (2,713 m) and Hochkalter (2,607 m) massifs and the Reiter Alpe mountain range as well as Berchtesgaden to the southwest and west; and the Latten Mountains and Untersberg (1,973 m) massif to the northwest and north. Moreover, this panoramic road is a good starting point for a number of hikes.

- The Panoramastrasse, formerly known as Roßfeld-Höhenringstraße, has two access roads: the southern access road goes from Klaushöhe am Obersalzberg via the South tollbooth to Ofnerboden. The northern access road begins in Berchtesgaden-Oberau and goes through the districts of Gmerk, Dora, Heißbäck, Madlerlehen and Pechhäusl to the North tollbooth. The summit route of the Rossfeld Panoramastrasse connects the south and north access roads on a high plateau with almost no inclines.
- Length: 15.4 km, maximum gradient: 13%, smallest radii in the sharp bends on the south ascent: 12 m, lane width: 7 to 9 m, altitude difference: approx. 1,100 m
- Number of bridge structures: 14
- Parking spaces: approx. 400 in total at the viewpoints
- Vehicle restrictions: none
- Toll per motorhome: €8.50, including passengers (as of 09/2020)
- Open all year round

Tip #2: Via the Oberjoch Pass through the Allgäu mountains

The Oberjoch Pass also offers a superlative experience: with no fewer than 106 bends, it is the most winding pass in Germany. It runs from Bad Hindelang to Oberjoch and on to Wertach and was an important trade route across the Alps as early as the Middle Ages. In 1662 alone, a total of 15,850 salt barrels à five centners are said to have been transported over the Joch Pass. Obviously the actual pass was not built until later – starting in 1895. And since it was laid out for what was then heavy traffic from the onset, it was built with a perfectly decent width while paying attention to the smallest possible gradient. This is why the height difference of 300 m from Bad Hindelang to Oberjoch is straddled with an impressive 106 bends. They also made sure to integrate the road into the landscape very sympathetically, so that the Joch Pass today is regarded as much a part of the landscape as the mountain panorama and the villages. Our recommendation: start your tour in Oberstaufen and then drive past the Großer Alpsee lake to Immenstadt, Sonthofen and then to Bad Hindelang and the Oberjoch towards Wertach. By the way, this route is part of the German Alpine Road – a tour that is also very popular with RV enthusiasts.

Data and facts about the Oberjoch Pass

- Highest point: 1,178 m
- Tolls: none
- Open all year round
- Vehicle restrictions: not recommended for car/caravan combinations

The Grossglockner High Alpine Road connects the two Austrian federal states of Salzburg and Carinthia, but only plays an insignificant role as a transit route. However, it is all the more important as a scenic route because it is the highest paved mountain pass road in Austria and runs from Bruck an der Großglocknerstraße via the Fuscher Törl and Hochtor mountain passes to Heiligenblut am Großglockner. Stretching 48 km, the pass with its 36 hairpin bends leads deep into the centre of Austria's largest national park, whose 1,800 km² extend to the federal states of Salzburg, Tyrol and Carinthia. The highest point of the mountain road is the Edelweißspitze, which is just over 2,500 m high. Numerous three-thousanders and especially the Grossglockner with its 3,798 m tower above the impressive surroundings.

The highlight of a trip on the Grossglockner High Alpine Road is undoubtedly the viewpoint at Kaiser-Franz-Josefs-Höhe, which the Habsburg Emperor once visited himself. Today, the car park, visitors' centre, lookout and restaurant are enthroned on the top, but this does not diminish the fantastic panoramic view over the snow-capped Großsslockner, the roughly 8 km long Pasterze Glacier and the Johannisberg mountain. Furthermore, you can observe wild animals in their natural habitat along the Alpine Road, on the hiking trails and on the Kaiser-Franz-Josefs-Höhe – from ibexes and chamois to marmots through to vultures and golden eagles.

Data and facts about the Grossglockner High Alpine Road

- The Grossglockner High Alpine Road connects Bruck (755 m) in the Salzach Valley in the north with Heiligenblut (1,301 m) or Winklern (965 m) in the Möll Valley in the south.
- Length: 48 km, 36 hairpin bends, width: two lanes, highest point: Hochtor at 2,504 m
- Several scenic stops, excursion options and exhibitions along the route
- Vehicle restrictions: none, car/caravan combinations also allowed
- Toll per motorhome: €37, including passengers (as of 09/2020). The category "Car" applies to motorhomes and car/caravan combinations up to 3.5 t (gross vehicle weight). The category "Truck 1" applies to mobile homes and car/caravan combinations from 3.5 t (gross vehicle weight) to 7.5 t (gross vehicle weight) and category "Truck 2" to vehicles heavier than 7.5 t (gross vehicle weight).
- Opening times: usually from the beginning of May to the beginning of November, depending on the snow conditions. The Grossglockner High Alpine Road is not accessible in winter. Tip: if you want to enjoy the panoramic road with less traffic, travel during off-peak hours.
- Camping/staying overnight along the High Alpine Road is explicitly forbidden.

Video with stunning impressions of the Grossglockner High Alpine Road:

Tip #4: Via the Timmelsjoch Pass from Austria to Italy

The road connecting the Austrian Ötztal Alps to the South Tyrolean Passeier Valley is also spectacular. With around 30 bends, the Timmelsjoch High Alpine Road winds its way along majestic mountain peaks and glittering glaciers along the Timmelsjoch and the pass at 2,509 m. The panoramic road, which is mainly used for tourism purposes, connects the valley towns of Sölden in Austria and St. Leonhard in Passeier in Italy. The access road is roughly just as steep from both sides, but significantly longer from the Italian side. The secret passage in the Alps opens up a world of high mountains to travellers while being fun to drive, especially around the bends. The journey via the Timmelsjoch is also a journey through different vegetation zones – from lush alpine meadows and blossoming alpine roses to storm-tested stone pine trees through to barren alpine landscapes with snow fields in midsummer. Sometimes sheep, goats and even ibexes cross the road. The landscape quickly takes on a Mediterranean character on the Italian side.

You should definitely schedule one or two stops during the trip. The many viewpoints are not only appealing because of their fantastic panoramas, but also because a number of stops and exhibitions provide information about the history, nature and culture of the region. Moreover, the Timmelsjoch High Alpine Road is easy to drive with a mobile home or car/caravan combination – at least on the Austrian side up to the summit. However, travelling with a car/caravan combination on the Italian side is only recommended with restrictions. It should also be noted that the High Alpine Road is only open to traffic in the summer and that there is a ban on nighttime driving, in general between 8 p.m. and 7 a.m.

Watch the video for some impressions of the Timmelsjoch High Alpine Road:

Data and facts about the Timmelsjoch High Alpine Road

The Stelvio Pass with its 87 bends is rightly called the Queen of the Alpine roads. Photo: Pixabay

Tip #5: Via the Stelvio Pass from the Vinschgau Valley to Lombardy

The drive over the Stelvio Pass is the perfect route for anyone who loves hairpin bends. After all, the Stelvio Pass, at 2,757 m above sea level, is the highest paved mountain pass in Italy and the second highest accessible pass in all of the Alps after the Col de l'Iseran in France. The road connects Bormio in the Valtellina Valley (Lombardy) with Prad in the Vinschgau Valley (South Tyrol). The almost 50 km long route has an impressive 87 hairpin bends, 48 from Prad to the summit, 39 down to Bormio. Some bends are extremely tight, so this route is only recommended for experienced campers with smaller motorhomes and campervans who have their vehicle under control. Car/caravan combinations are generally prohibited on this pass.

One particular highlight is the drive from Prad towards Bormio. Coming from Prad, you will have a breathtaking view of almost the entire mountain road with its tightly winding serpentines and of the impressive panorama of the Ortler Alps to your left. It is not without reason that the Stelvio Pass is also called the Queen of the Alpine roads. The disadvantage: long gone are the days when it was an insider tip, so during the high season in summer you will encounter swarms of motorbikes, cars, mobile homes and cyclists. It is, therefore, recommended to not travel during the main holiday periods, and instead during the off season in late summer or autumn.

Watch the video for some impressions of the Stelvio Pass

Data and facts about the Stelvio Pass

- Length: Prad to Bormio approx. 49 km
- 87 hairpin bends, maximum gradient 12%
- Tolls: none
- Vehicle restrictions: complete trailer ban for the entire road; ban on vehicles longer than 10.5 m from Trafoi. There is a ban on vehicles higher than 3.3 m on the Bormio side.
- Opening times: the pass is closed in winter and is usually open to traffic between the end of May and November.