The journey along the German Wine Route continues. From Maikammer it is also known as the Southern Wine Route. The route winds through vineyards and quaint wine-growing villages and of course there are always opportunities to taste the local wine and purchase a supply for at home. In addition, castles, palaces and unusual buildings along the way attract visitors. 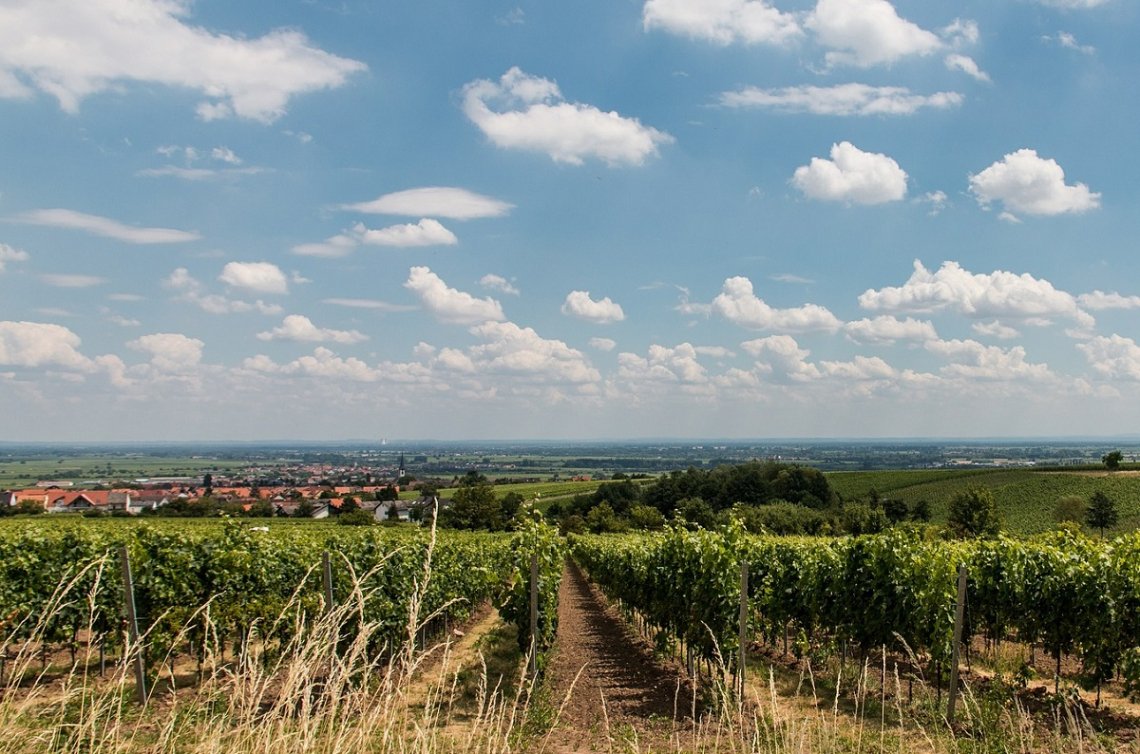 Around Maikammer there is the greatest density of winegrowers along the German Wine Route. Photo: Pixabay

Due to its location, the town of Maikammer can almost enjoy a Mediterranean climate. Not least because of this, more wineries have settled here than at any other location along the wine route. In addition, not only do the grapes thrive here, but also fruits such as kiwis, lemons and almonds. In total, around 150 winegrowers in Maikammer grow their wine on around 350 hectares of vineyards - more than 60 of them even work full-time. A wine tasting is a must in Maikammer, so to speak. For this, a visit to the local vinotheque Weinkammer, which is located in Haus Rassiga, a more than 400-year-old Renaissance building, is recommended. In the vinotheque, 24 local winegrowers are represented with their wines - enough choice to try. In addition, there are various wine bars and restaurants in Maikammer, where good wine can be combined with good food.

Attractions in and around Maikammer

Whether before or after the wine tasting - in Maikammer a short walk through the village is definitely a good idea. Because here you can see a whole series of magnificent sandstone buildings, half-timbered houses and interesting winegrowers' courtyards from the 16th to 19th centuries. Then there is the monument to General Hartmann from 1900, the Johannes Leonhardt School from 1887, the Catholic parish church of St. Cosmas and Damian from 1756/57 and the Alsterweiler Chapel with the Maikammerer Altar and one late Gothic triptych. 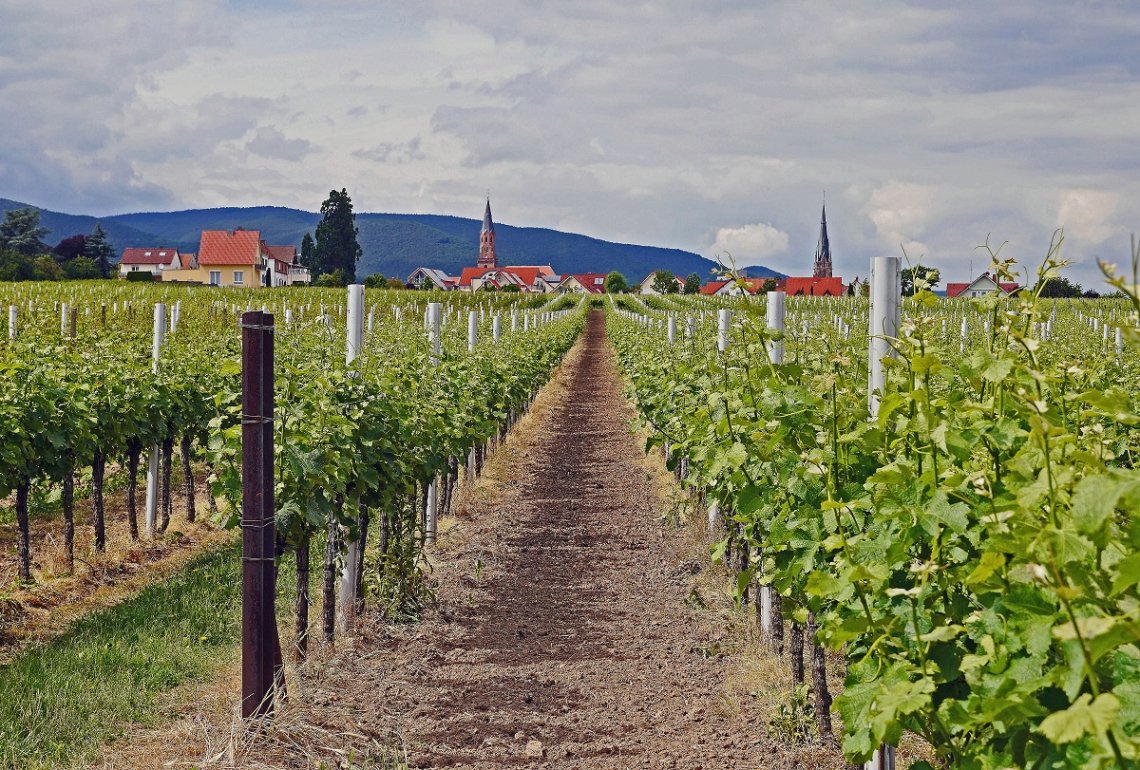 In the small town of Edenkoben you can learn a lot about the history of winegrowing in the region. Photo: Pixabay

Just three kilometers south of Maikammer is also worth a detour to the small town of Edenkoben. Here you can immerse yourself in the former work of winegrowers in the 19th century in the Museum of Viniculture and City History and familiarize yourself with the many individual steps that were necessary to make a good wine. This ranges from the vintage with wooden hotts on the back to the wine press by hand, to scrubbing the wooden barrels and bottling. Numerous old devices from this period can be seen in the museum. The more than 300 year old town house is also dedicated to the city history of Edenkoben, which is strongly rooted in viticulture. a short walk through the historic center of Edenkoben is also a good way to see the old winegrowers' houses and archways.

The German Wine Route is one of the most popular travel routes in Germany for... 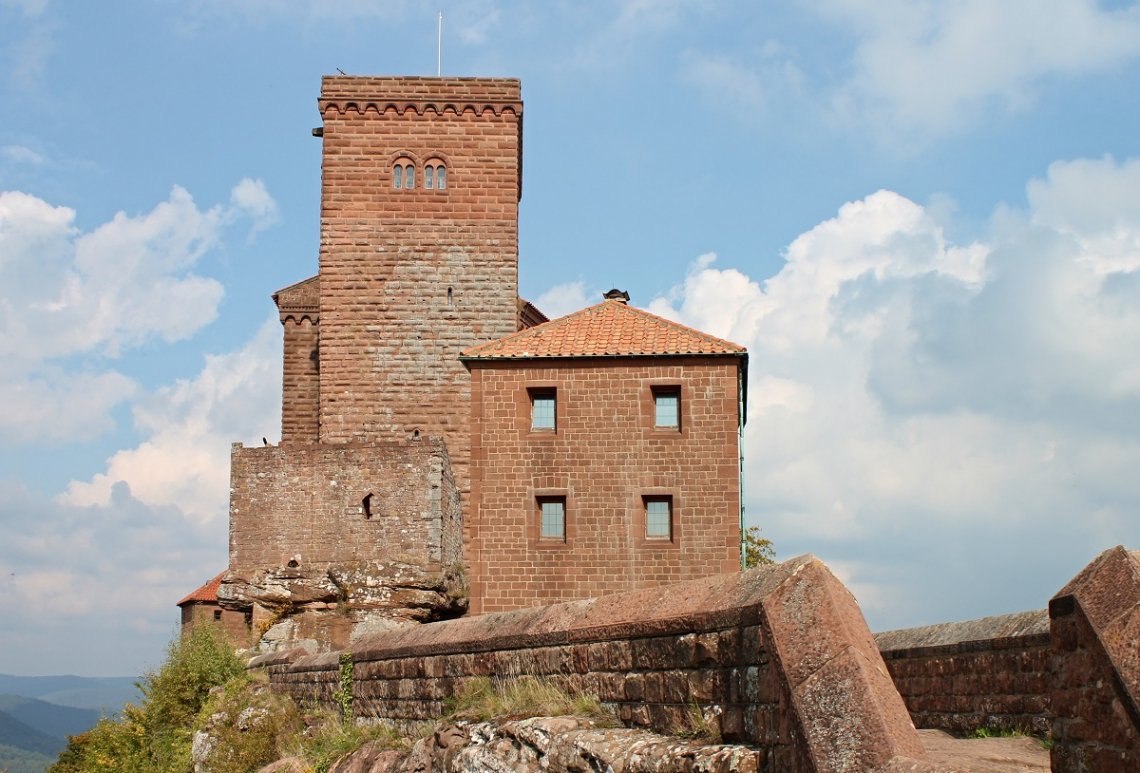 Trifels Castle was one of the most important imperial festivals in the Stauer Empire. Photo: Pixabay

One of the sights along the German Wine Route is the Trifels Imperial Castle, which towers over the town of Annweiler. It stands 310 meters above the village on a rock of the Sonnenberg and protected the Reichsland around Annweiler in the High Middle Ages. Here the German emperors and kings kept the imperial jewels in the 12th and 13th centuries, which can still be admired as replicas in the treasury of the castle. The fortress was also the Staufer state prison, in which, for example, the English king Richard the Lionheart was imprisoned in 1193. How long exactly his captivity lasted on the Trifels is controversial among historians. Only a few weeks have been historically documented. The castle can be visited at certain times from February to November inclusive. It is closed in December and January. There is a paid parking lot at the foot of the castle mountain, from where the castle can be reached on foot in about 20 minutes.

The city of Bad Bergzabern is also worth a stop along the motorhome tour along the German Wine Route. In the historic old town center, a city tour starting at the former castle with roots from the 16th century is worthwhile. The appearance of the Renaissance castle is characterized by its two mighty round towers and its large portal.

From here it goes on to the Landschreiberhaus, a half-timbered building from 1723, and the Gasthaus Zum Engel, which is often referred to as the most beautiful Renaissance house in the Palatinate. It was built between 1556 and 1579 by the dukes of Palatinate-Zweibrücken and today also houses the city's museum. Shortly after the angel, the Auf dem Berg district begins with the remains of the city walls and the former Stockhaus prison. Also worth seeing is the baroque mountain church, which was built by the Lutherans between 1720 and 1730. At the beginning of the Pfarrgasse is the reformed rectory, which was built on parts of the old city wall with a reconstructed rampart and a tower from the 13th century. If you follow the Pfarrgasse, you will quickly reach the market square, the surrounding buildings of which mainly date from the early 18th century. Outside the old town is the spa park to the west with spa houses, spa facilities and a beautiful thermal bath to relax.

Station 9: End of the motorhome tour at the German Wine Gate

The architecture of the German wine gate in Schweigen-Rechtenbach, the official end point - or starting point - of the German Wine Route, clearly points to the history of the origin of the Wine Route in 1935: it was a kind of short-term and inexpensive marketing measure by the National Socialist regime to promote tourism and to increase wine sales in the region at short notice and to counteract a drop in prices. This was considered necessary because the harvest in 1934 was above average and significantly larger quantities of wine were produced than usual. At the same time, many Jewish wine traders were ousted by the National Socialists, so that the winegrowers got into sales difficulties.

At the time of its creation, the German Wine Gate with its arch was exactly over the country road that leads directly to the German-French border near Wissembourg (Alsace), which is only 700 meters south. Today the old route is only open to pedestrians and cyclists, traffic is diverted around the gate. However, its viewing platform, which is about 10 meters high, is still accessible and offers a view to the east in the direction of the Rhine valley up to the Black Forest. An approximately three-kilometer-long wine educational trail and the Wine Walk of Fame, launched in 2012, also start right at the German Wine Gate. It is an honor trail on which the metal plates embedded in the floor bear the names of international figures or groups who have made a name for themselves in the fields of wine and viticulture.