Back
The biggest wave in Europe – Nazaré in Portugal

A spectacular sight – giant waves crashing onto the shore, making the lighthouse on the coast look like a tiny Lego figure. This is where death-defying surfers ride monster waves and set daring world records. Magnificent forces of nature are at play in Nazaré. See for yourself! 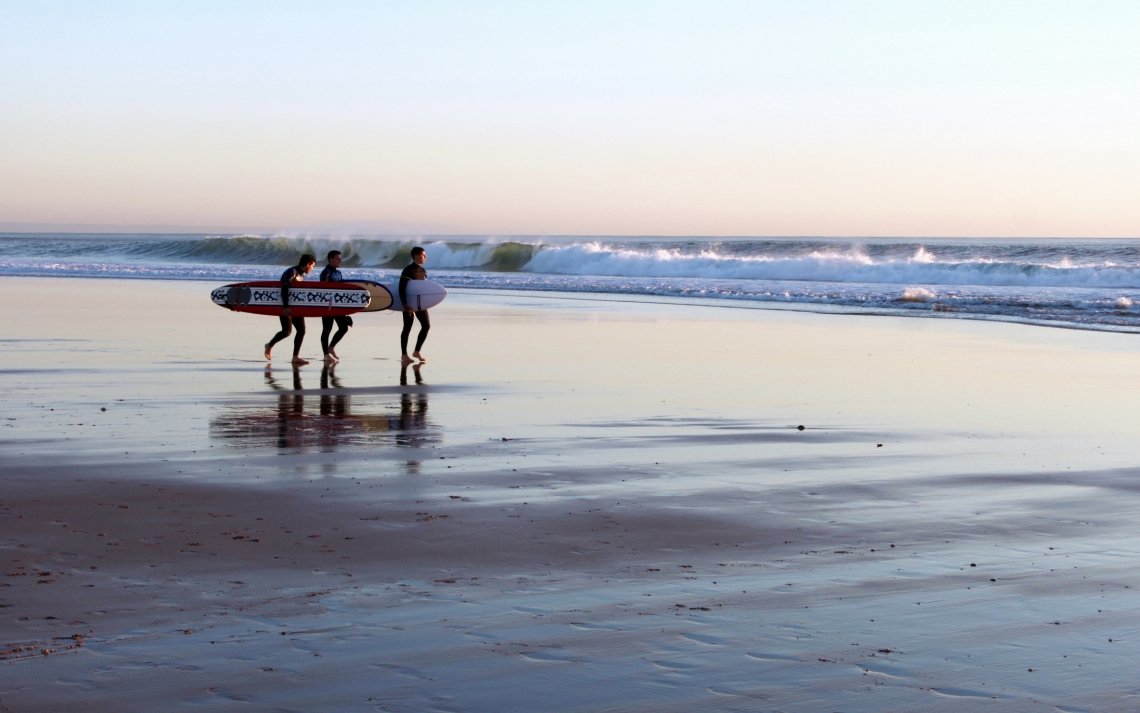 Nazaré has the perfect conditions for extreme athletes © RitaGomesOliveira, via Unsplash.com

There's something charming about the rugged Atlantic coast of Portugal: high cliffs rise untamed from the deep blue sea, while the roofs of the white houses paint red dots in the landscape. The wide sandy beaches tend to attract more tourists in summer, whereas the harsh winter wind turns Nazaré into a wild adventure playground for surfers. Once a tranquil fishing village, Nazaré is now an international Mecca for surfers.

Nature created a "ski jump" for the waves here on the Atlantic coast. An underwater canyon about 5,000 m deep and 230 km long (called the Nazaré Canyon) flows directly into the shallow coastal region off Nazaré. The water rushes in from the open sea at high speed. The canyon gets narrower and narrower near the coast, so that the water masses are “pressed” like a funnel and finally break on the coastal plateau with a loud roar.

Only the very brave dare to go into the water at Nazaré © NicoleHoneywill, via Unsplash.com

Big waves are not mass-produced, but instead arise under very specific conditions. The high season for waves is in winter when the westerly wind pushes the mass of water towards the coast following a violent storm, in turn creating those notorious monster waves that can reach up to 30 m. If you camp in Nazaré at this time of year, you will meet surf gurus from all over the world as word has got around that this is Europe's big wave spot. Everyone is waiting for the perfect wave here, and when it finally comes, surfers plunge into the roaring water. They obviously have an audience as neither locals nor tourists want to miss out on seeing such a wild ride. You will get the best view from the rock where the lighthouse is – and although quite high, it will suddenly look tiny in the shadow of the waves.

One world record after another

Surfing history was made in Nazaré! Hawaiian Garrett McNamara initially set the world record for the largest wave ever surfed in 2011, measuring 23.77 m. This put this once sleepy fishing village on the surfing map almost overnight. McNamara's record was broken by the Brazilian surfing professional Rodrigo Koxa in November 2017. The then 38-year-old rode a 24.38 m high wave and his feat is still listed in the Guinness Book of World Records. Portuguese Hugo Vau reportedly surfed a wave over 30 m high in January 2018, but it was not officially validated by Guinness World Records.

Jet ski to the wave

The current is too strong and the waves are too high for surfers to get out to sea on their own. They, therefore, have to rely on jet ski drivers to pull them into the gigantic floods. They are also the ones who rush to the surfers' rescue when a wave swallows them up, leaving everyone, holding their breath in fear. Even the toughest training cannot guarantee a victory over the mass of water. The suction of the waves can keep the surfers under water for several minutes. This is why huge wave surfers not only train their strength and endurance, but also apnoea diving, as this increases their chances of the sea "spitting them out" alive again 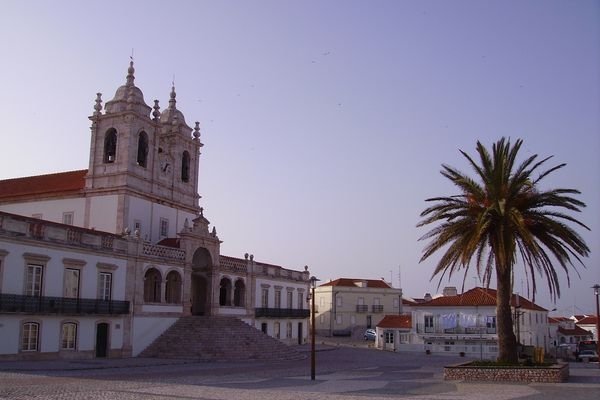 The church in Nazaré is an important pilgrimage site © CC-BY-2.0, changes made, photo: "Igreja de Nazaré" by lele3100, via flickr.com

Nazaré is also home to the Nursing Madonna in the church "Nossa Senhora da Nazaré" (Our Lady of Nazaré), located on the O Sítío hilltop above the fortress. You can enjoy a wonderful view of the sea from here as well. According to legend, she was carved by St Joseph. She is one of the oldest figures of her kind and made the church one of the most important pilgrimage sites in Portugal. As you can see, Nazaré easily combines traditional beliefs with global surfing culture.

The Surf Museum in the fortress

The ancient fortress near the lighthouse houses a small museum about the modern heroes of Nazaré. It explains how high waves are created and shows themed videos and pictures of international surf icons.

A must in Nazaré: 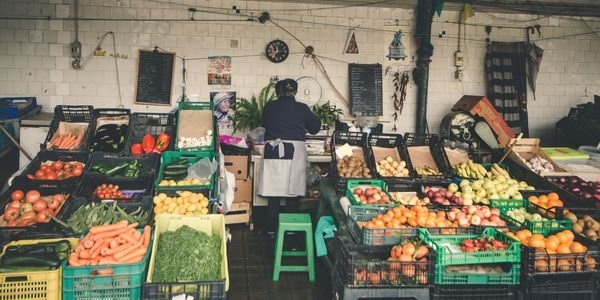 Make sure you visit one of the markets. © ManoloAmeixa, via Unsplash.com

- Taste your way through the local cuisine. Visit a market hall and buy fresh fish and seafood from the famous fishwomen who traditionally. wear seven skirts on top of each other- Go to a fish restaurant. Choose one where locals go to eat – they know where to go and what to avoid.
- Have breakfast in a "pastelería" (bakery) around the market hall, consisting of the typical "natas" (custard tarts) or "tosta mista" (toasted ham and cheese sandwich)

- Take walks on the deserted beaches. Tip for families: this is an excellent place to fly kites.
- Stroll through the winding streets of the historic "Pederneira" district.

Day trips in the area 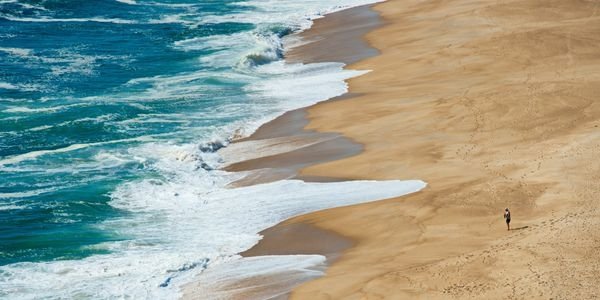 You will have the dream beaches (almost) to yourself in winter © MagdaB, via Unsplash.com

- There are many museums in medieval castles and national parks in the surrounding area.
- Are you a passionate surfer yourself? The Atlantic coast is full of waves, especially in winter. However, only advanced surfers should venture out on the water at this time of year. Even though not every single wave is a monster wave, the currents are strong and the waves high. Therefore, find out more about suitable spots and the weather conditions when you get to Nazaré. Winter surfing in Nazaré should be left to the daring extreme athletes

- Ohai Nazaré Outdoor Resort: Beautiful location in a pine forest, open all year round, restaurant and bar on site, bike rental, sports fields, close to the sea, 2 km from the town centre, laundromat, minimarket
- Parque Orbitur Valado: About 2 km from the town centre, located in a pine forest. It has 350 electricity connections, three sanitary buildings, bungalows and shops. Open all year round.

The rugged coastal landscape is unique © FelipeChagas, via Unsplash.com

Pack warm and windproof clothing for your trip to Nazaré. The days are nice and sunny, but the wind is fresh and the high humidity makes temperatures of about 20 °C feel much colder.