Back
Stargazing tips in Saxony-Anhalt

Motorhome trip to the best spots in Saxony-Anhalt, Germany, for observing the sky

Motorhome trip to the best spots in Saxony-Anhalt, Germany, for observing the sky

Saxony-Anhalt, and especially the Saale-Unstrut region, has a wealth of places where you can follow your passion for all things celestial and terrestrial: from observing the starry sky to visiting impressive structures and excavation sites that will take you on an exciting journey back in time to the prehistoric past of Central Europe. And you might or might not be surprised to discover that our ancestors were remarkable stargazers. Freeontour visited a few stunning spots for stargazing at night that are also awe-inspiring during the day – a must on your motorhome trip itinerary through this federal state in Germany.

Stonehenge is famous for its alignment with the solstices, but you can also see traces of how early humans observed celestial objects in the Saale-Unstrut region (and Saxony-Anhalt in general). In the past three decades, archaeologists have discovered exceptional sites and finds in the wine and cultural landscape of Saale-Unstrut – an area shaped by the High Middle Ages – including the oldest solar observatory in Europe in Goseck and the Nebra sky disc. The latter is the oldest known concrete depiction of cosmic phenomena and was added to the UNESCO Memory of the World Register in 2013.

Discoveries on the Sky Paths

These sites are part of the Sky Paths network connecting five outstanding archaeological sites in Saxony-Anhalt. This route can be easily completed by campervan in a week, and is also the perfect way to learn how to decelerate by avoiding roads full of tourists racing to the next attraction. We recommend parking your vehicle on a side road in one of the smaller places on the Path, and you will notice that gazing up at the night sky is just as amazing as looking down at Earth during the day. So why not enjoy slow travel, focusing on the here and now, and reap its benefits? 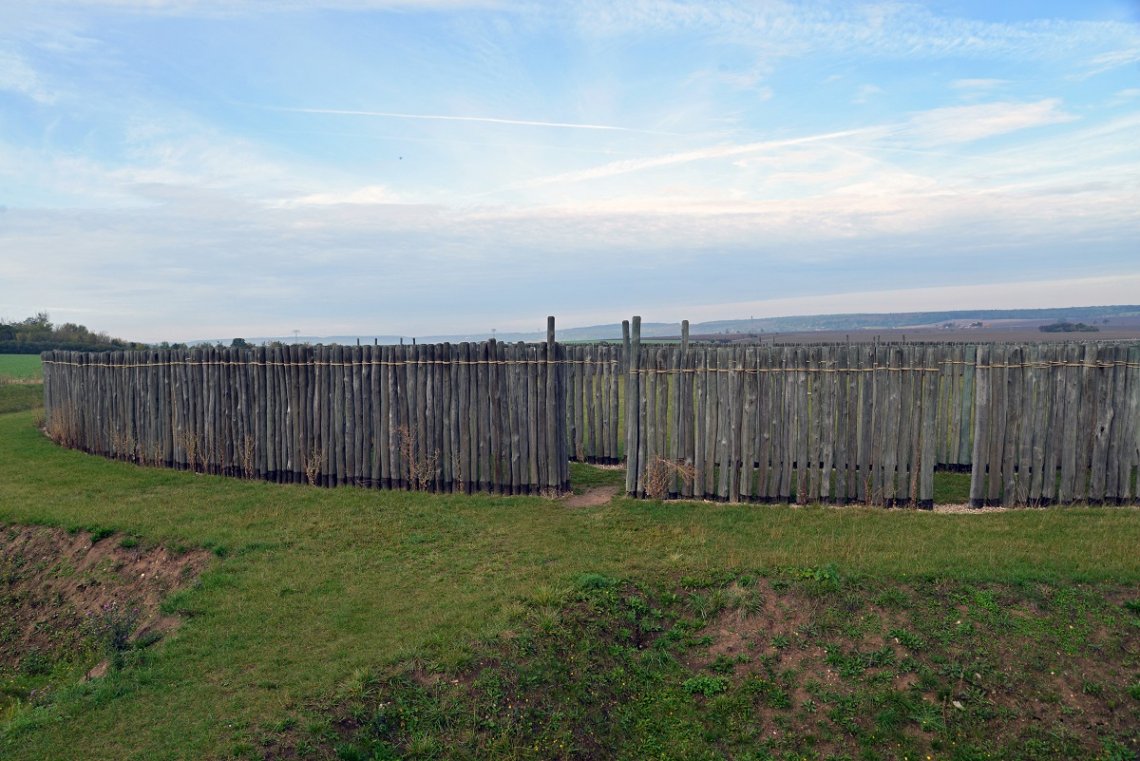 Only about 35 kilometres from the site where the world-famous Nebra sky disc was found is one of the earliest pieces of archaeological evidence of systematic observations of the sky, the Goseck Circle – a solar observatory. And it's hard to believe that this circular enclosure, which was created 7,000 years ago, is about 2,000 years older than the Stonehenge stone circle. The Circle was discovered in 1991 during an exploratory flight. Excavations of the site began and it was completely reconstructed in 2005. This circular enclosure in Goseck is ideal for stargazing as our ancestors knew exactly where to set up this kind of structure. Since the enclosure is in the open – only the village of Goseck is visible – there is practically no disturbing light pollution. 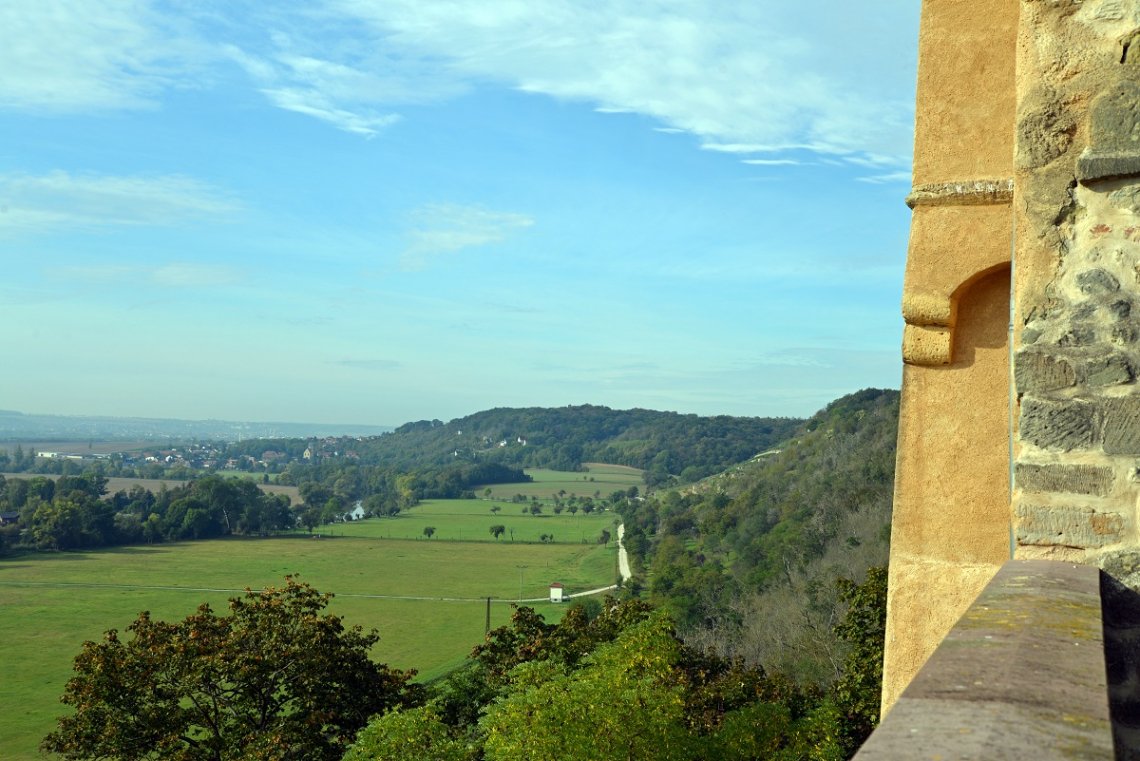 Goseck Castle not only houses the stimulating information centre, but also offers beautiful views of the landscape. Photo: Jörg Berghoff

The palisades shield you from local light sources so that you can see the night sky better. At winter solstice, you can watch the sun rise in alignment with the southeast gate and then set behind the southwest gate – a breathtaking spectacle. The information centre housed in neighbouring Goseck Castle also features an exhibition on the circular enclosure and the excavations with must-see exhibits. It is open daily from April to December and by appointment from January to March. But Goseck Circle is just as exciting during the day, exerting an almost magical attraction. The sun observatory doesn't need any grand gestures, it is simply content to exist and look as though it were built to accompany us for eternity. 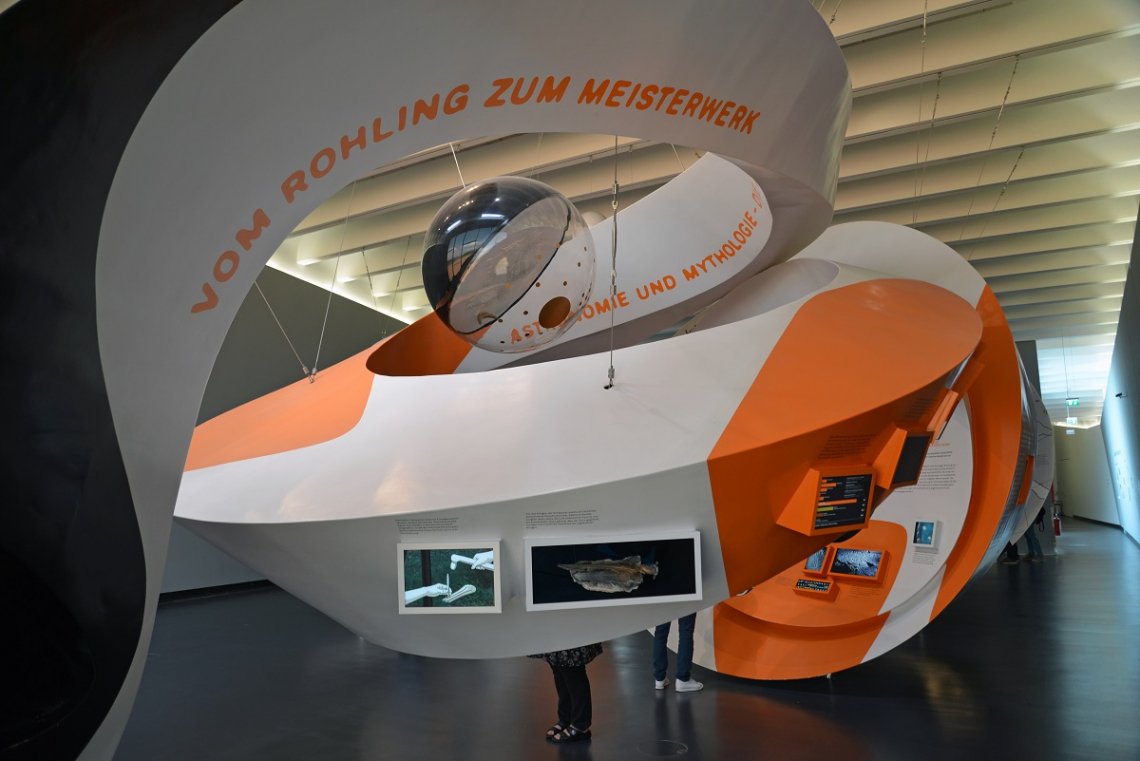 Another fantastic stargazing spot is just 35 kilometres northwest of Goseck in Nebra. The Nebra Ark is a state-of-the-art visitor centre located near the site where the Nebra sky disc was discovered. With the aid of a modern, interactive presentation, it reveals the knowledge encoded on the 3,600-year-old circular bronze plate. The centre is aimed at astronomy enthusiasts and families alike. Every last Sunday of the month, parents and children from the age of ten can take part in the Family Sunday and see an actual astronomical research laboratory. The lectures, holiday workshops and winter solstice events in December as well as the summer solstice evening in June are also popular with visitors to the Nebra Ark and an ideal opportunity to admire the starry sky. Please note, that the visitor centre Nebra Ark will be closed due to construction work from October 1,2022 until end of June 2023. 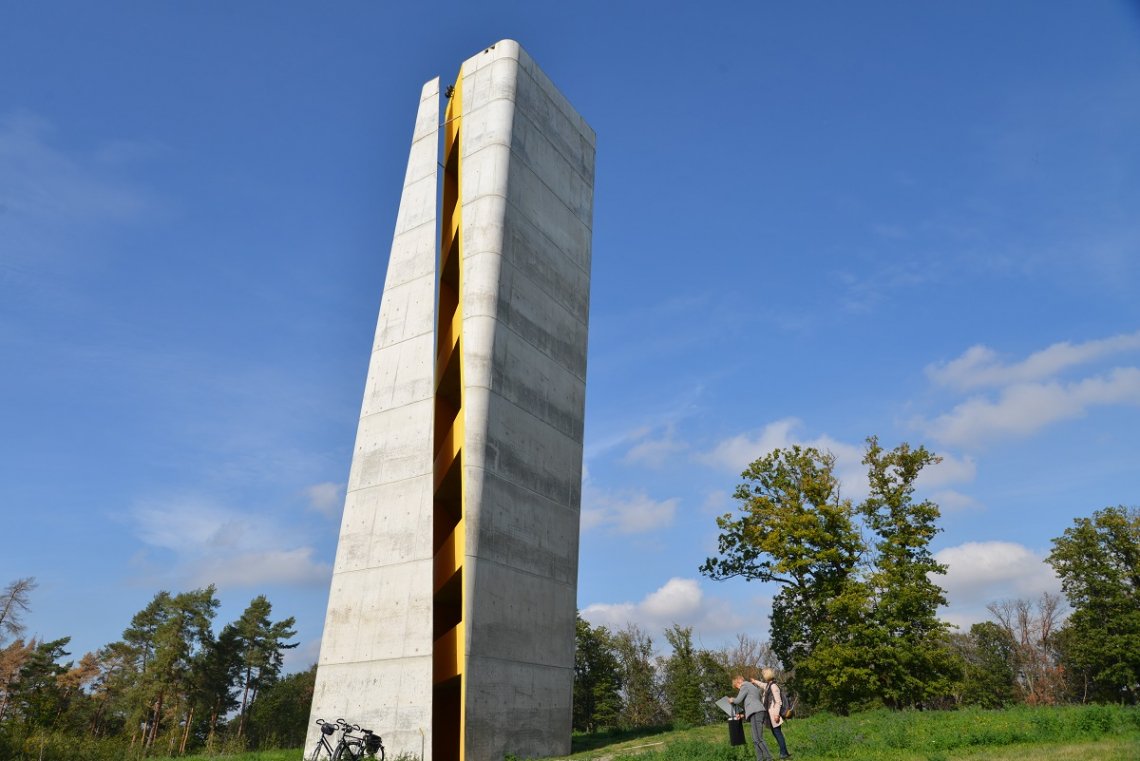 The observation tower also serves as the pointer of an oversized sundial: a vertical section cuts through the building, marking the sight line to the Brocken. Photo: Jörg Berghoff

Nevertheless, you can visit this place all year round – surprise, surprise – to observe the sky. The Nebra Ark always holds its stargazing events on Mittelberg, the mountain where the Nebra sky disc was found. The trees shield the mountain plateau well, making it very dark to better see what's going on in the sky. The footpath through the forest is six kilometres there and back, but it's worth it as you'll be rewarded with a magnificent view of the starry sky. The site where the disc was found on the Mittelberg mountain is marked by a nearby 30-metre-high observation tower with a ten-degree incline, giving you a view of certain prominent spots in the vicinity, e.g. the Kyffhäuser and Harz mountain ranges, including Kulpenberg and Brocken, their highest summits respectively. The car park below the Nebra Ark visitor centre is popular with motorhome owners as it is quiet to sleep here overnight. Parking is free at the moment, but otherwise the car park is lacking in infrastructure. 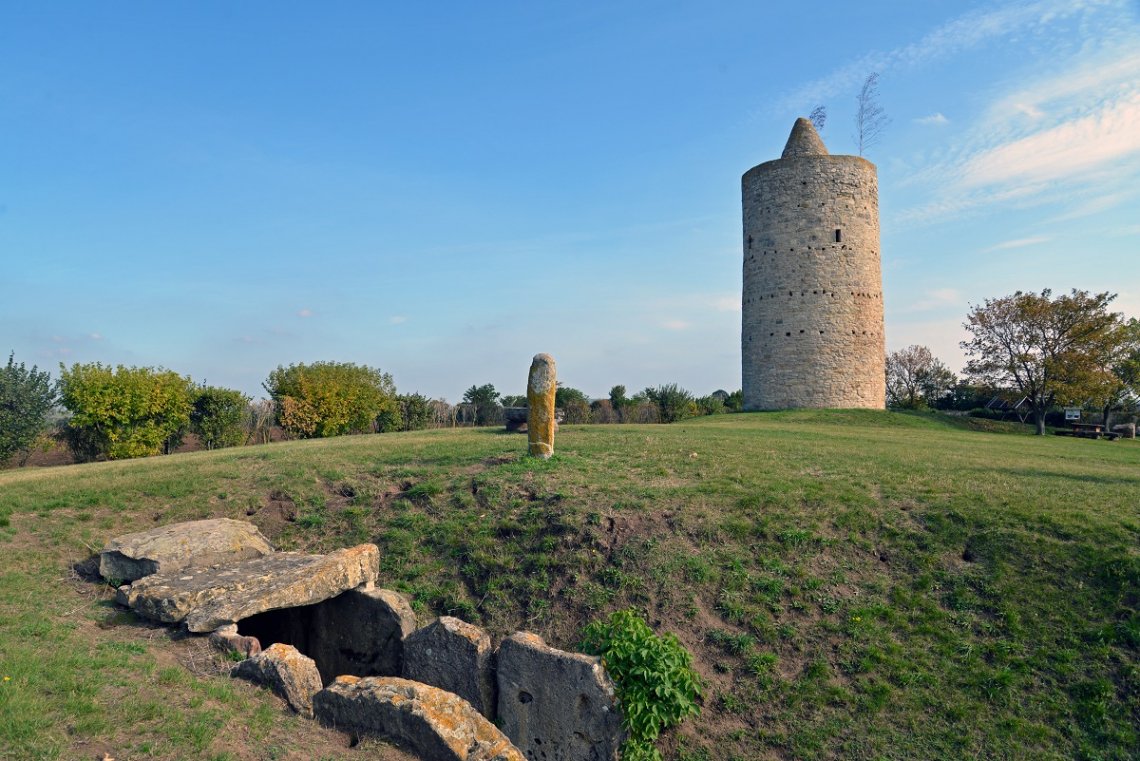 30 kilometres northeast of Nebra in Langeneichstädt is another alfresco location predestined for stargazing as there are no disturbing light sources for miles around. Moreover, you will probably be alone in the car park at the complex and can, therefore, enjoy the starry sky in the evening to the full. An interesting find was discovered during field work in Langeneichstädt in 1987: a stone chamber tomb was found by chance, and is around 5,500 years old. In addition to jewellery made from animal bones, marble and amber, a menhir statue depicting a dolmen goddess also came to light. You can see a replica of the menhir on site next to the medieval watchtower. The original is kept at the Halle State Museum of Prehistory, which also houses the original Nebra sky disc. 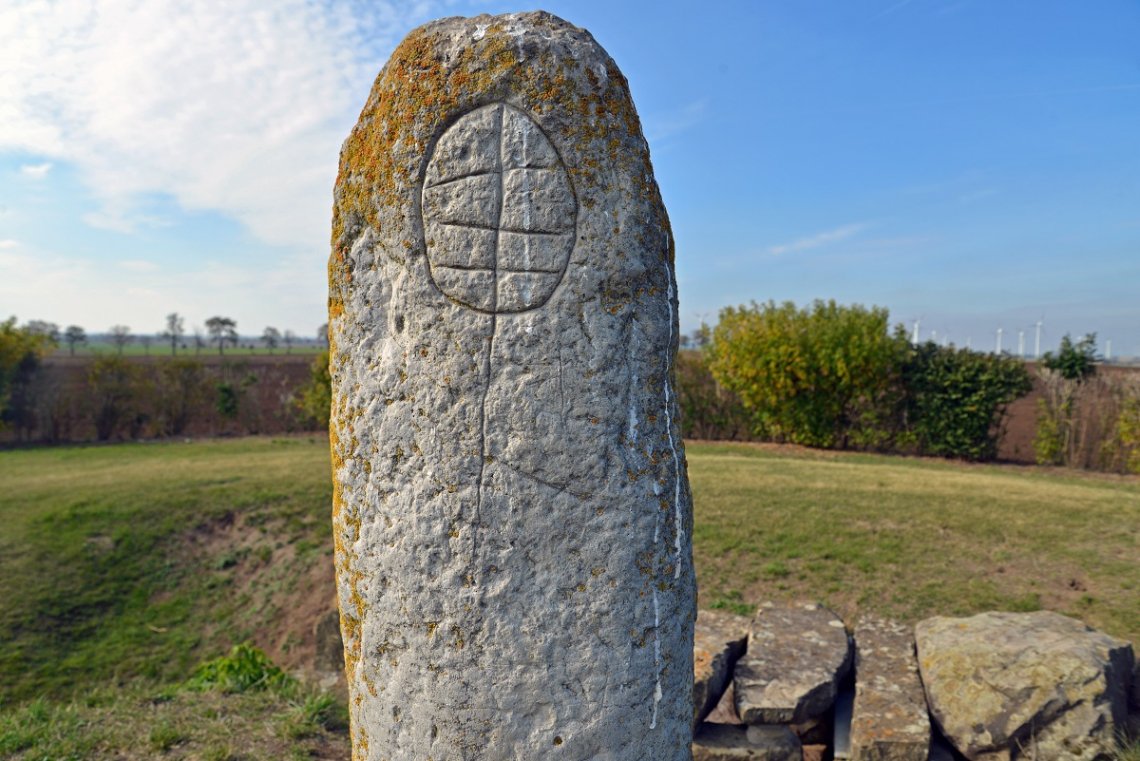 The menhir in Langeneichstädt is a replica of the original found in the stone chamber tomb. Photo: Jörg Berghoff

The tomb and goddess menhir date from between 3,600 and 2,700 BC. The menhir is almost two metres high and has numerous carvings in the top part that most likely represent a female deity. An axe can also be seen. There are signs of wear and tear on the sides, indicating a ritual: the researchers believe that people at that time hoped that touching the menhir would bring fertility to humans, animals and plants. The watchtower in the immediate vicinity is also worth a look. It was once part of a high medieval territorial protection system. However, the tower is only accessible on special occasions during a guided tour since the only entrance – as is usual with these kinds of structures – is about eight metres high and can only be climbed using a ladder. This includes Pentecost Sunday when the Langeneichstädt Watchtower Association (Warteverein Langeneichstädt) holds a festival in the outdoor area. 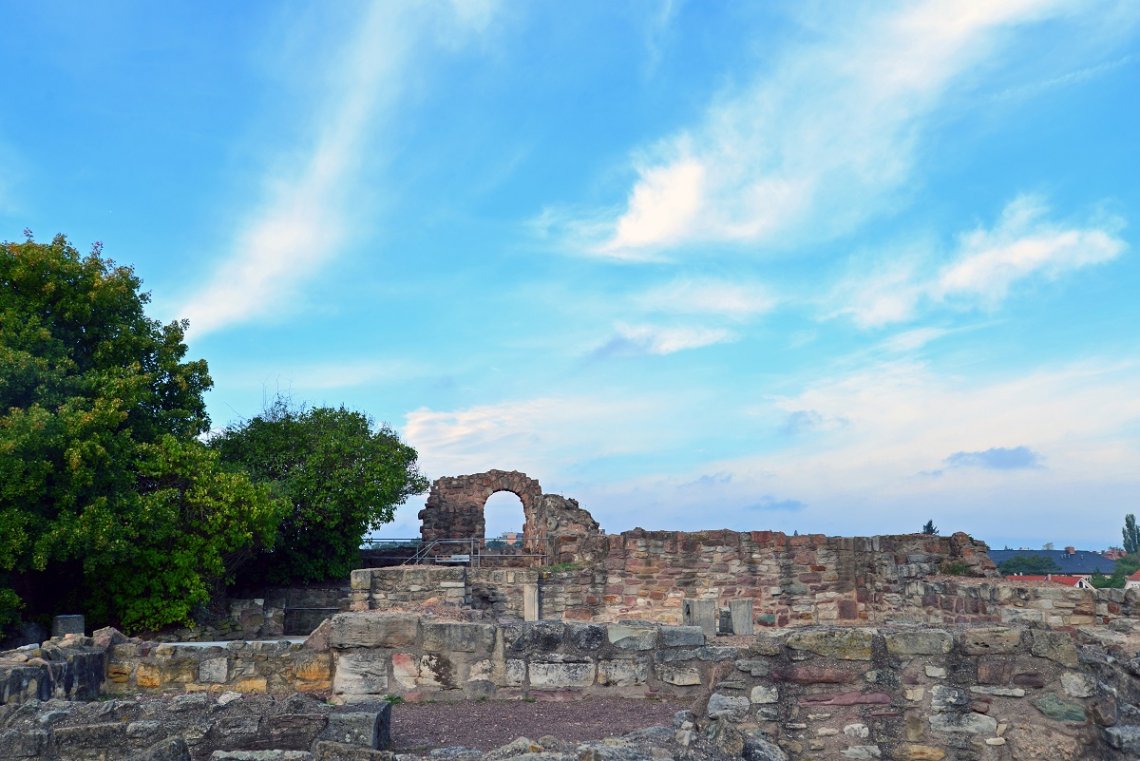 The ruins of the Giebichenstein Upper Castle are a popular stargazing spot in Halle. Photo: Jörg Berghoff

Stargazers should also head to Halle as it has many vantage points, e.g. the ruins of the Giebichenstein Upper Castle on the banks of the Saale River. You will have a good view of the sky right above the river. Thanks to the altitude, it's dark enough to see shooting stars, especially during the Perseid meteor shower in August. However, it does get quite full because at the beginning of August, when the Perseids are active, the Giebichenstein Upper Castle is also a great spot for picnics under the starry sky, guaranteeing shooting stars, and a summer cinema is also held here – the sky can sparkle up to a hundred times an hour. But the romantic ambience of the castle also makes it the perfect stargazing spot at other times of the year. Incidentally, you can also experience the starry world in the new planetarium in Halle, built in the former gasometer on Holzplatz. Its car park has plenty of space for cars, motorhomes and buses. 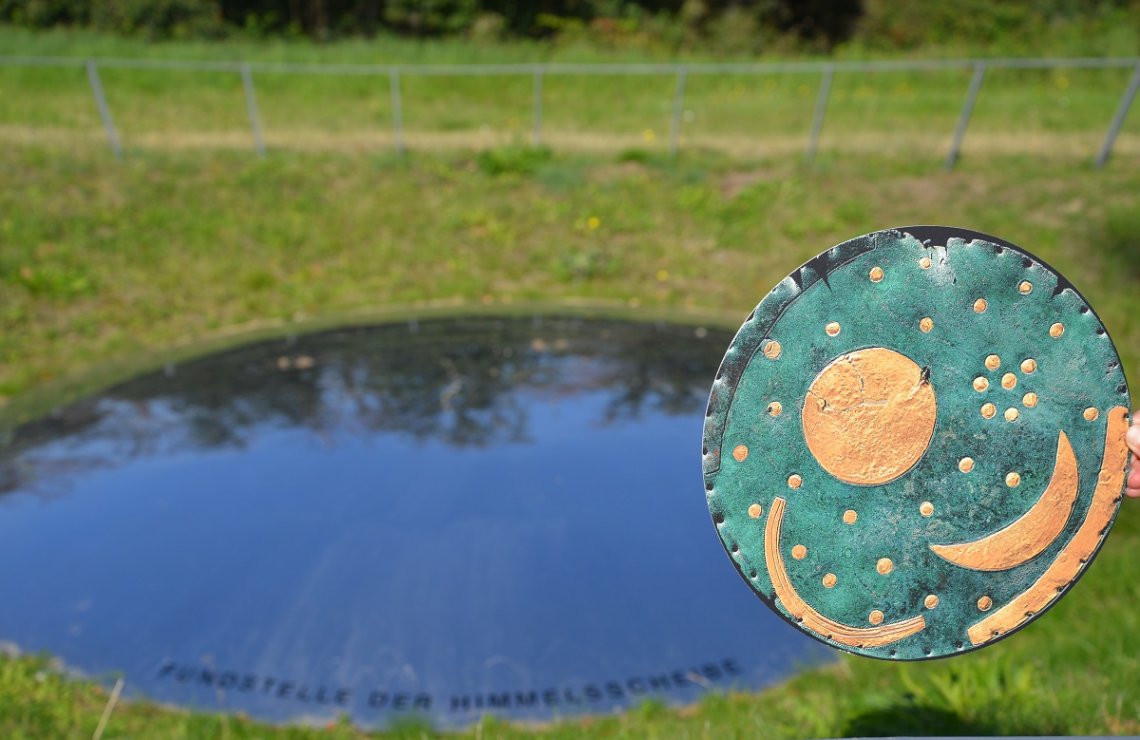 The original Nebra sky disc can be seen in the Halle State Museum of Prehistory – the picture above shows a replica at the site where it was found in Nebra on the Mittelberg. Photo: Jörg Berghoff

The Halle State Museum of Prehistory is a must for astronomy fans, especially as it houses the original Nebra sky disc – a disc showing the world's oldest known concrete depiction of the cosmos and a unique testimony to the history of humankind. The disc was developed in four stages. At first, the starry sky portrayed on the disc had 32 stars, a full moon or sun and a crescent moon. There is a cluster of seven stars and the remaining 25 stars form no recognisable pattern; they do not depict any known constellation, instead they are arranged more or less evenly around the other celestial bodies. As a result, the focus is mainly on the seven stars placed close together, interpreted as the Pleiades. These seven stars, also known as the Seven Sisters, have been known to all cultures around the world and used as a natural calendar since antiquity. Archaeologists believe that the sky disc had several purposes, one being an astronomical memory aid for people who observed the sky in the Bronze Age. The Pleiades also signalled when it was time to sow and harvest, thus were being used to structure the farming year.

Stopover #5: The Ring Sanctuary of Pömmelte

Another way to combine stargazing with exciting cultural history is to visit the vast Elbe landscape south of Magdeburg. Archaeologists found the remains of a cult site here that was more than 4,000 years old: the Pömmelte circular enclosure was reconstructed at the original site and can be accessed at all times. The Ring Sanctuary of Pömmelte resembles Stonehenge in England in terms of size, structure and function. However, the Stone Age complex in Pömmelte did not consist of mighty boulders, but rather thousands of wooden poles. You can now explore the evening sky from a newly built tower and get a bird's eye view of the structure. Moreover, you can see other finds from this period in the Salzland Museum in Schönebeck (Elbe), which will give you a detailed insight into life and the complex rituals and sacrifices at that time.

Video: Drone flight over the Ring Sanctuary of Pömmelte

Stopover #6: Stargazing in and around Magdeburg

Although the Stone Age village in Randau near Magdeburg is no longer part of the Sky Paths, it is still a great stargazing spot and will take you on a captivating trip back in history while bringing human prehistory to life. It gives schoolchildren, families and groups access to the lives of our ancestors. The members of the Randau Association (Förderverein Randau) are committed to running and maintaining the Stone Age village, encompassing dwellings, huts and barns. What's more, you along with a small motorhome group can even rent the village and park here overnight and enjoy the night sky in privacy upon request.