Back
Motorhome tour to the almond blossom in the Palatinate

In March and April, spring in the southern Palatinate in Germany once again wears its most beautiful robe. It shines in white and pink and immerses the landscape of the German wine route in a fairytale world of flowers and scents. If you hike along the paths of the almond blossom, you can literally look through rose-tinted spectacles and the winter is finally over. The best way to experience this natural sensation is by walking on one of the numerous hiking trails along the flowering trees. 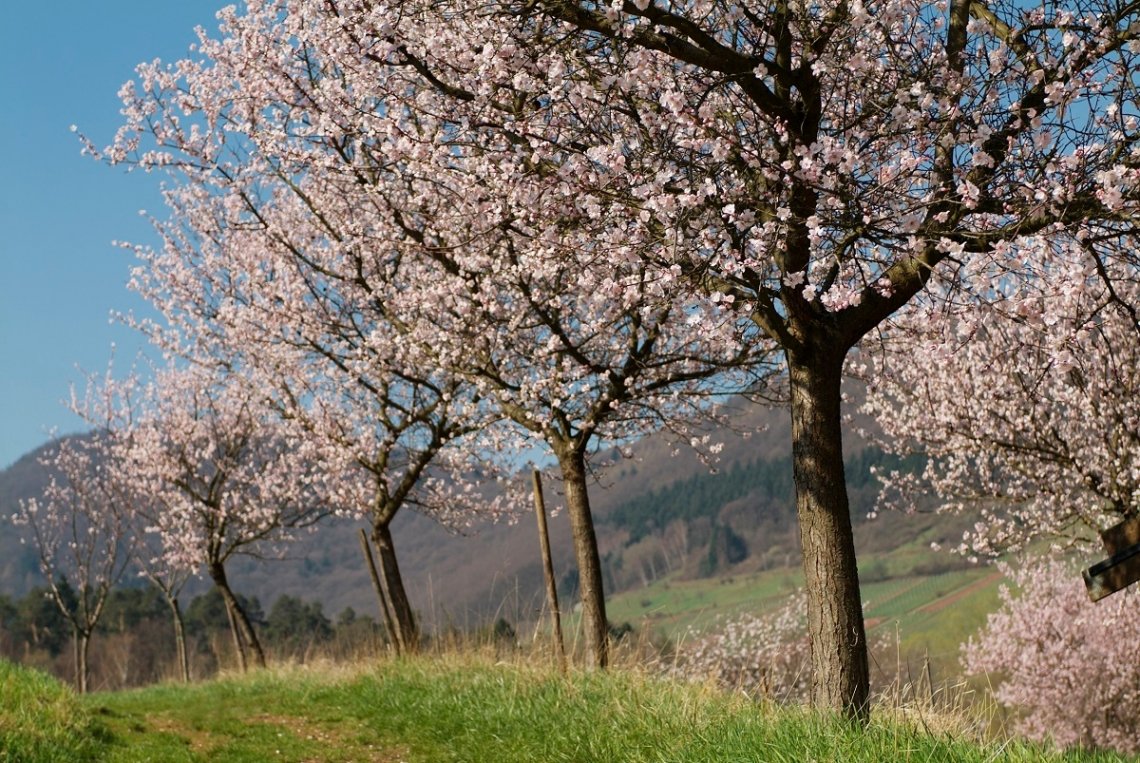 The almond blossom in the Palatinate is something special. Photo: © Ralf Ziegler, Bildarchiv Südliche Weinstrasse eV

When does the almond blossom begin in the Palatinate?

When it comes to almond blossoms, you don't always have to go to Mallorca - especially if the Palatinate is so much closer and can also be reached by motohome or caravan. Because the beauty of nature alone inspires a trip to the spring-like Palatinate in southern Germany. In addition, happy celebrations, wine tastings and activities take place to celebrate the almond blossom. What are you waiting for? Just park your camper or caravan under a pink flower tent! There is hardly any other place in Germany where the almond blossom can be experienced as magnificently as in the Palatinate. The region of the German Wine Route with its romantic vines, castles and ancient wineries is worth a trip in every season. But the pink spring is something even more special. The Palatinate Almond Weeks begin in early March and end in late April. Each almond blossom is of course a little different, but most often the main flowering period is between March 20 and April 10. 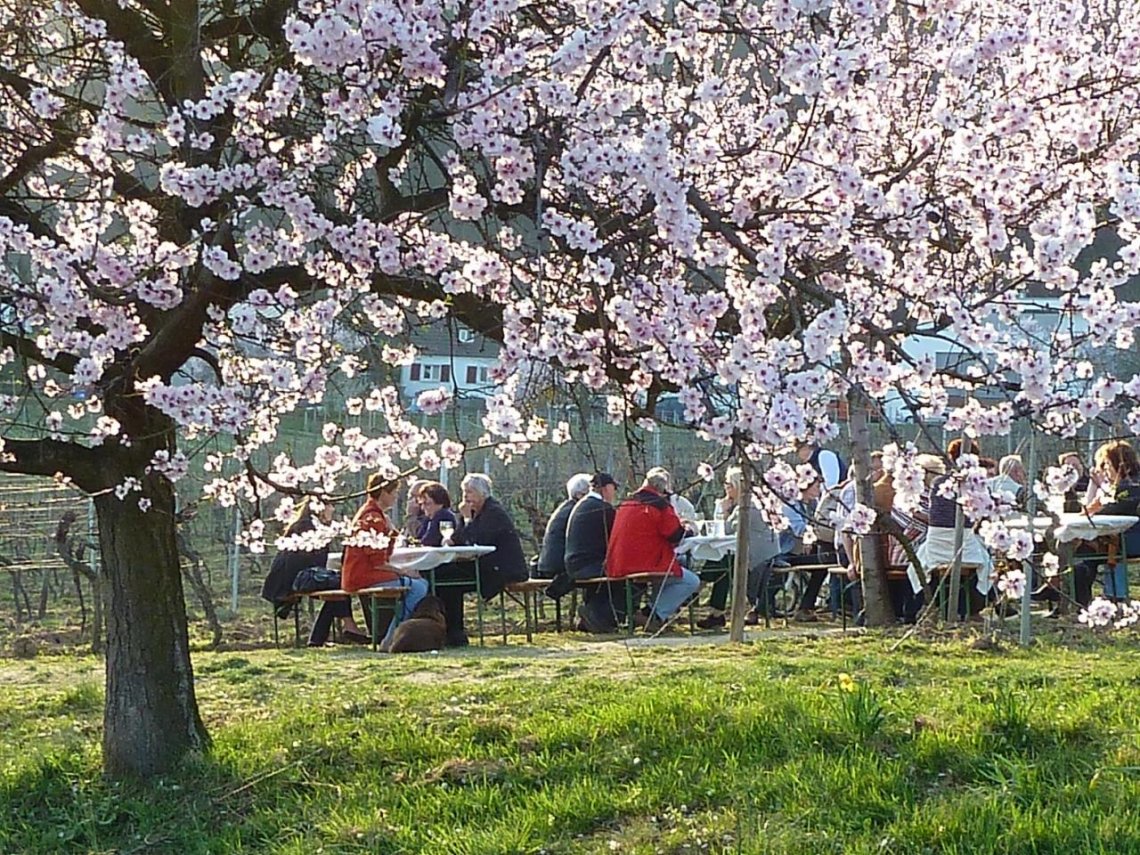 How and where can you experience the almond blossom in the Palatinate?

There are a particularly large number of almond trees in and around the village of Gimmeldingen - more than 2,500 to be precise. The inhabitants of Gimmeldingen have already been celebrating the almond blossom festival for several decades now. During this festival situated in the middle of the sea of flowers, the history of the almond trees is brought closer to the visitors. Specialties are sold at the stalls and each year an “almond blossom queen” is crowned who is allowed to plant a young almond tree. But the festival in not only about the almond blossom: the festival is also a wine festival where local wines from the surrounding vineyards are to be tasted. Visitors can also take part in daily guided tours along the “Almond Educational Path”, where there is much to learn about the healthy fruit. The approx. 2-hour guided tours end at the King Ludwig Pavilion - a popular vantage point that in former days King Ludwig I of Bavaria enjoyed visiting. The date of the almond blossom festival is generally set at very short notice: only when a certain level of flowers or buds is spottet on a Monday, it will be decided whether the festival will take place the following weekend or not. It is therefore worthwhile to check the website of the Almond Blossom Festival regularly or to be included in the organizer's email notification list. Please note though, that it is very likely that the festival will not take place in 2020 as a precaution concerning corona virus. 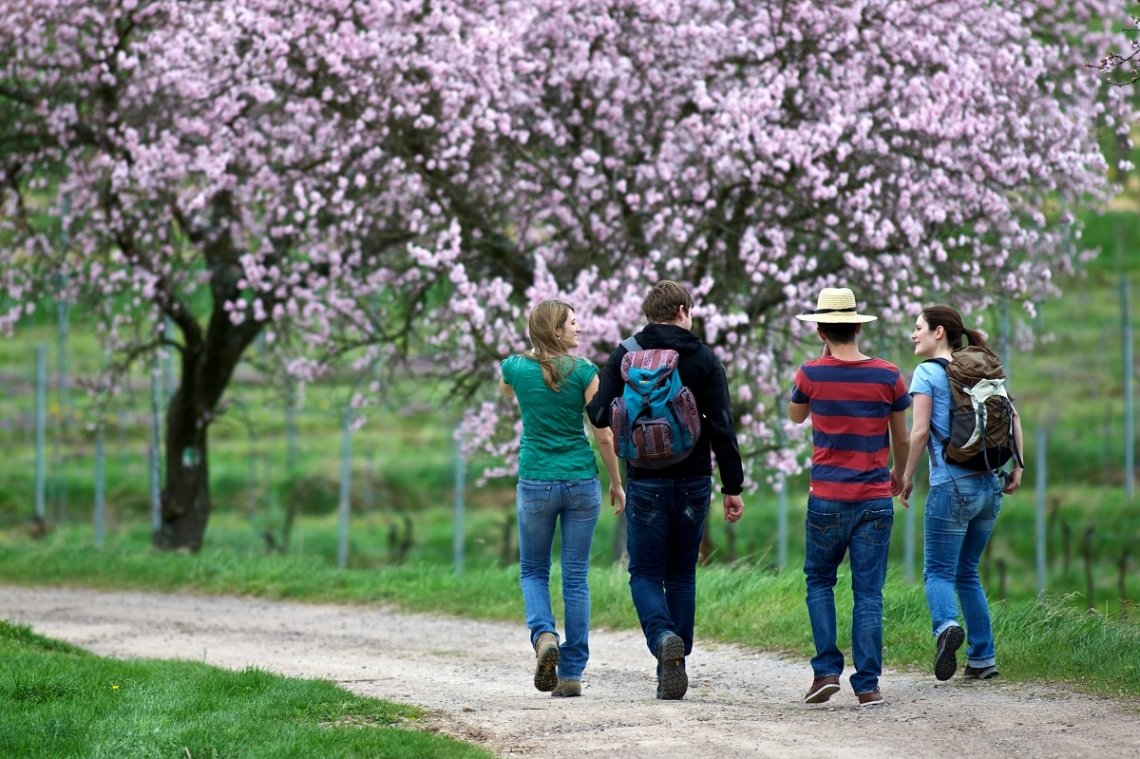 The almond trail presents itself in full splendor with the almond blossom in the Palatinate. Photo: © Kurt Groß, picture archive Südliche Weinstrasse eV

Almond blossom for active people: hiking and biking tours along the Almond Trail

The Palatinate Almond Trail is the right choice for all those who would like to combine the almond blossom in the Palatinate with an outdoor activity. The Almond Trail leads over a total of 77 kilometers through the valley of almond blossoms and is suitable for both hikers and cyclists. The Palatinate Almond Trail begins in the village of Bad Dürkheim and continues via Wachenheim, Deidesheim, Königsbach, Gimmeldingen, Neustadt an der Weinstrasse, Maikammer, Edenkoben, Gleisweiler, Klingenmünster, Gleiszellen and Bad Bergzabern to Schweigen-Rechtenbach. Of course, you can also start your route in Schweigen-Rechtenbach and cycle or hike in reverse order. The level of difficulty for the entire tour is supposed to be of medium degree for hikers. However, two of the five stages are easy to walk, as there are hardly any hights to overcome. Here you can see the individual stages in detail. If you prefer only to hike individual stages, you can take the regional train back to the starting point at various locations. 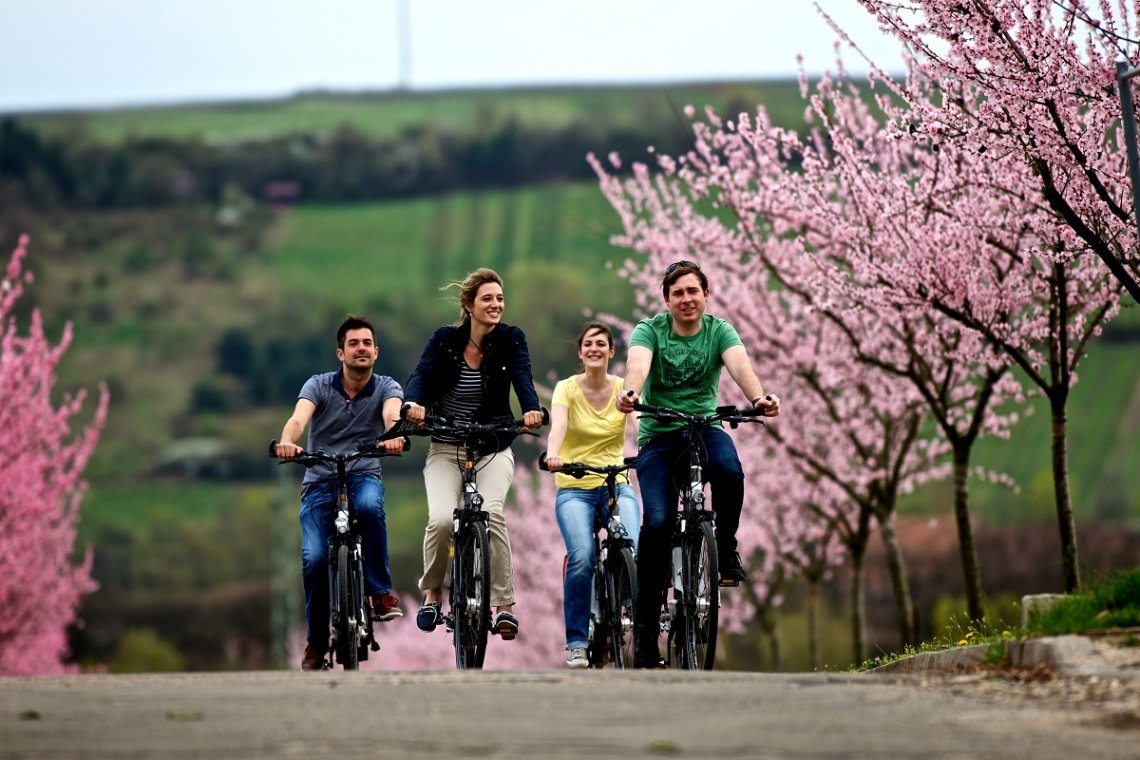 Round trips during the almond blossom

Even for all those who would like to return to their motorhome or caravan without any other means of transport, there are various circular hikes through the pink sea of almond blossoms. At Edenkoben there are three circular hikes and a cycle route: The shortest route through the almond groves is 4.5 km long and can be managed on foot in about an hour. The longest hiking route is 8.2 km long and takes around 3.5 to 4 hours. A 13.3 km cycle route also starts in Edenkoben, which runs through vineyards, fields and almond groves. Another circular route starts in Maikammer. It leads without any notable slopes over 12.5 km past almond groves and almond alleys, beautiful viewpoints as well as historical sights and monuments. Detailed descriptions of the tours of the almond blossom can be found here . 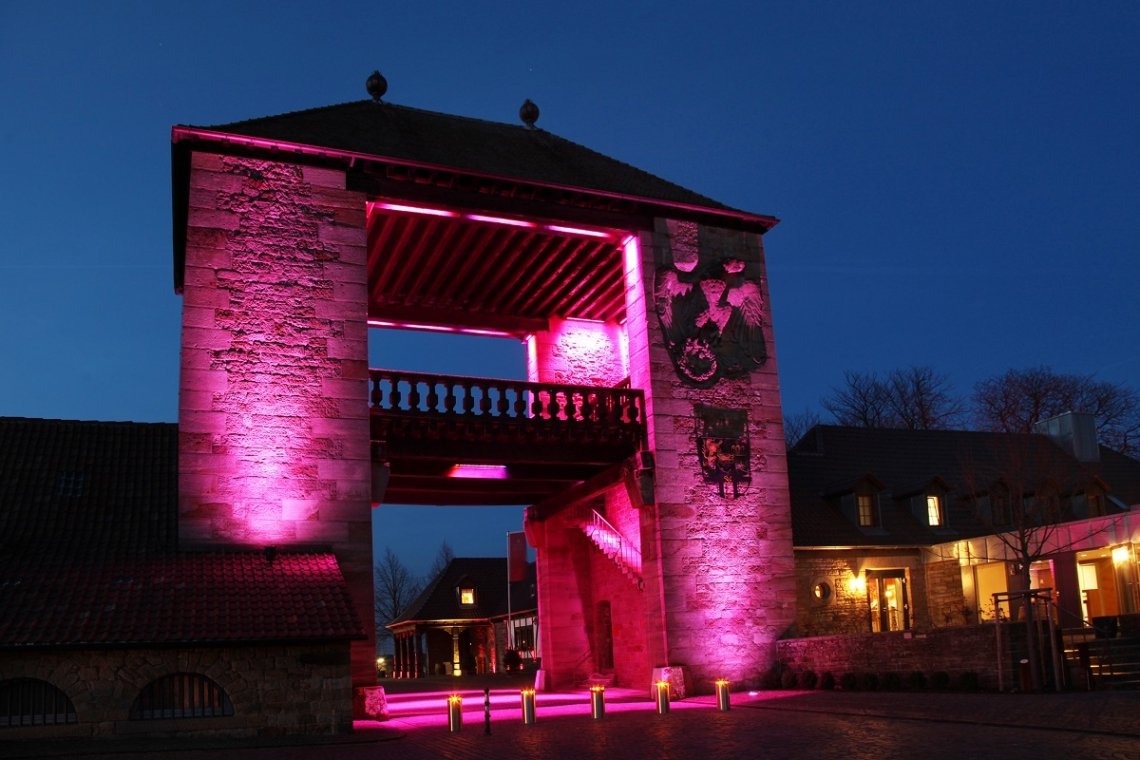 Not only the wine gate in Schweigen-Rechtenbach shines all pink in the almond blossom.
Photo: © Rolf Goosmann, picture archive Südliche Weinstrasse eV

Other highlights during the Palatinate almond blossom

During the Palatinate Almond Weeks, however, not only the almond blossoms shine in various shades of pink. Since 2010, the palaces, castles and wineries of the German Wine Route have also been bathed in a white and pink light during the almond weeks. The historical sights include the Wachtenburg in Wachenheim, the Hambacher Castle, the Trifels Castle near Annweiler, the Landeck Castle in Klingenmünster and the German Wine Gate in Schweigen-Rechtenbach. Both effects have their own magic - the almond blossoms shine during the day and the historic walls at night. Another special event is offered during the Almond Weeks: “ Vino Lumino ” will take place on March 28, 2020. Various wine shops in the region will then be highlighted with pink light. There is - of course - rosé wine and menus made from delicious almonds. 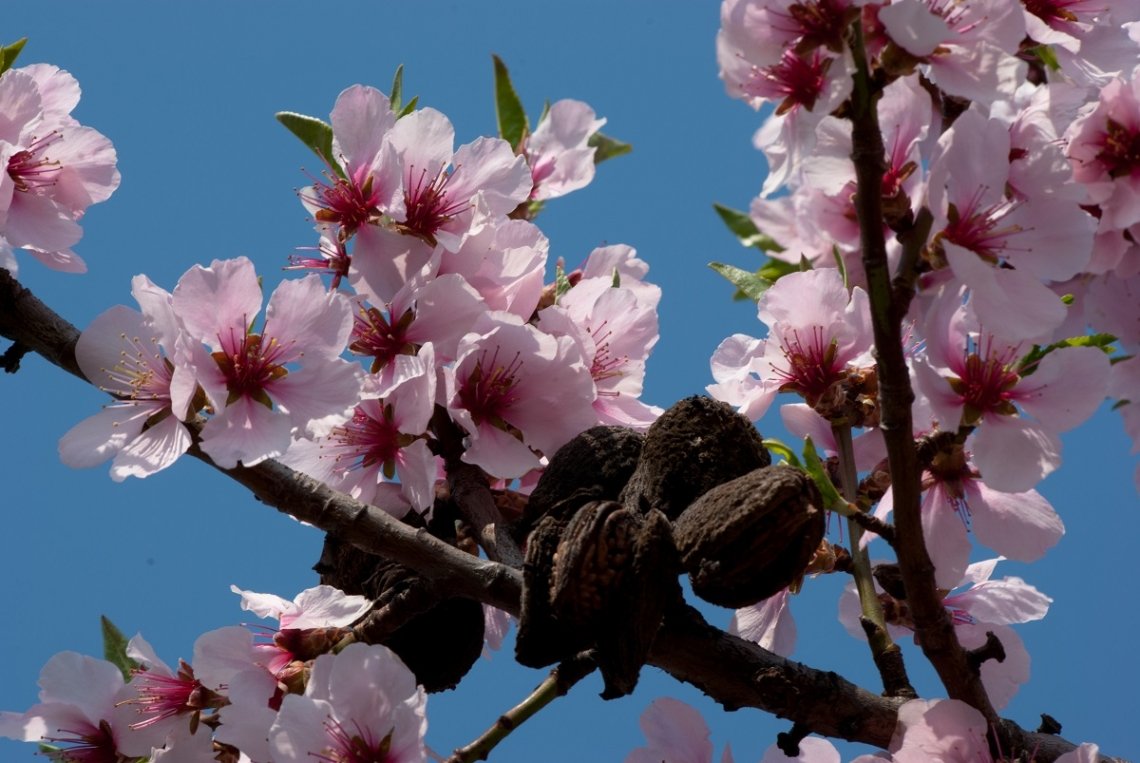 Almond trees have been at home in the Palatinate since Roman times. Photo: © Michael Seitz, picture archive Südliche Weinstrasse eV

What is the origin of the almond blossom in the Palatinate?

In addition to wine, the Romans already planted almond trees in this area of the Palatinate, which is known for its mild climate and fertile soil. The trees in Europe originally only were native in the Mediterranean region, but they are thriving here as well. In the 16th century, the Bishop of Speyer had thousands of almond trees grown as the most important type of fruit tree. Many place names such as "Gimmeldinger Mandelgarten", "Edesheimer Mandelhang" or "Birkweiler Mandelberg" still bear witness to the long tradition of almond trees in the Palatinate. Most of the trees belong to the varieties of the pink blooming "pearl of the wine route" and the white blooming "Dürkheimer Krachmandel". You can also find the varieties "Prinzessmandel" and "Palatina". The harvested almonds are traditionally processed into regional products such as almond bread, almond chocolates or almond ice cream. You can and should try these specialties extensively during the almond weeks.