With the camper to the tulip blossom in the Netherlands: Is there a better way to start the camping spring? FREEONTOUR starts in one of the most camper-friendly countries - a journey along gigantic flower carpets, which of course also leads past the Keukenhof tulip mecca. 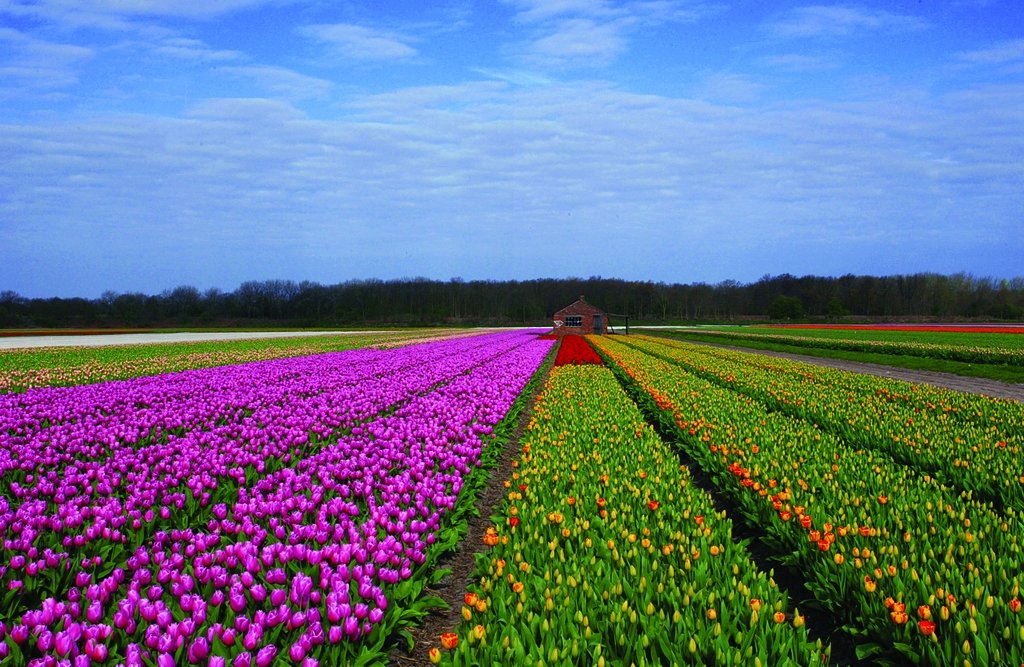 When and where do the tulips bloom best?

When exactly the tulip bloom begins, depends of course on the respective temperatures and weather conditions. In most years, the bloom on the tulip fields begins around mid-March, the main time of the tulip bloom is usually between mid-April and mid-May. During this time, crocuses, hyacinths, irises, lilies and daffodils also bloom in the wide fields. In some places it smells as lovely as in a huge flower shop. If you roll down the windows of your motorhome you can fully enjoy this spring scent.

The flower carpets can be seen in many places in the Netherlands. However, the bloom is particularly colorful in the Noordoostpolder region in the province of Flevoland and in the Bollenstreek region  south of Amsterdam, near Leiden, Haarlem and Noordwijk. There are also many tulip fields in the north of the Netherlands stretching up to the Island Texel and in the south in Zeeland. An absolute tulip mecca is of course the famous Keukenhof in Lisse, which is located southwest of Amsterdam not far from the North Sea. And since the Dutch capital is on the way anyway, why not make a first stop at the Tulip Museum and a small historical excursion of the tulip blossom in the Netherlands? 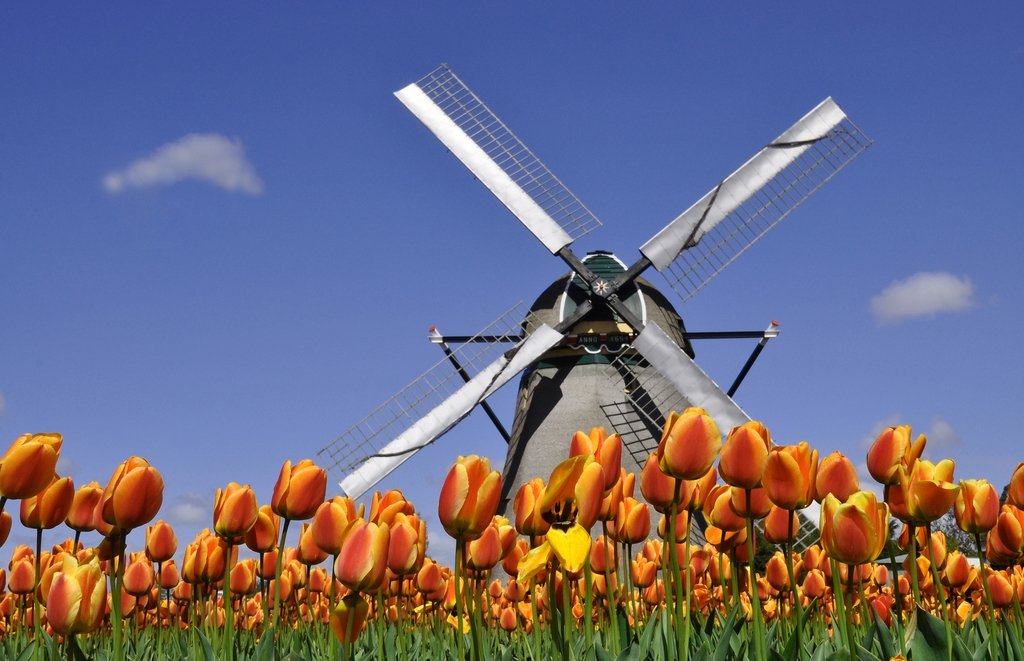 Tulips were once a luxury, today they are as symbolic of Holland as the windmills. Photo: NBTC

Trip to the Tulip Museum: How did the tulips come to the Netherlands?

Tulips once adorned the palace gardens of Ottoman sultans and were weighed out in gold as a precious luxury item. In the 16th century, the French-speaking botanist Carolus Clusius received a few tulip bulbs from a noble friend who received them as a gift from a powerful sultan. Clusius, back then court botanist of the Emperor of Austria, started growing tulips and finally brought the bulbs to Holland, where he became a professor at the University of Leiden. In a very short time, the proud flowers from the East became popular across Europe. They were a privilege of the rich, because the prices for the tulip bulbs were very high.

Speculative trade finally led to "tulip mania" in the 1630s, also known as "tulip madness", "tulip fever" or "tulip hysteria". For a single tulip bulb you got an entire house by the canal and the first speculation bubble in Holland was created. Finally, the speculative bubble burst and many traders went bankrupt. The tulip mania was over, but to this day the tulips are in the truest sense firmly rooted in Dutch culture and, along with the romantic windmills and “clumps” (clogs), are landmarks of the country.

The small Tulip museum in Amsterdam deals with these and other historical topics related to the Dutch landmark. It is located in the popular Jordaan district opposite the Anne Frank House. Our tip: In some districts of Amsterdam the streets are rather narrow. It really is advisable to park the motorhome in a park + ride parking lot on the outskirts of Amsterdam and drive to the city center by public transport. Tram lines 13, 14 and 17 as well as bus lines 170, 172 and 174 all stop at Westerkerk. This stop is closest to the Tulip Museum and the Anne Frank House. 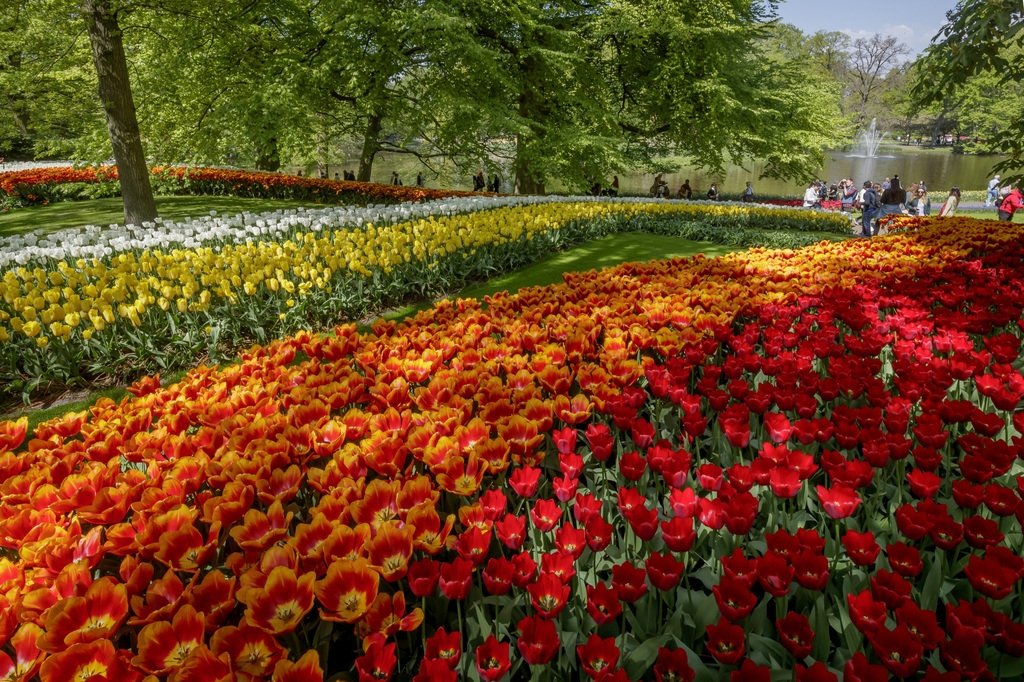 Each year, more than 800 different types of tulips are planted in the Keukenhof park. Photo: NBTC.

Excursion to the tulip mecca Keukenhof

With regards to the tulip bloom the Dutch visitor attraction number 1 is located just 35 km southwest of the Tulip Museum: the Keukenhof botanical garden. It is also known as the world's largest flower park since there are more than seven million tulips of 800 different varieties which will radiate here from March 20 to May 9, 2021. The flower exhibition Keukenhof covers a total of 50 hectares and is located on the 240 hectare Keukenhof estate, which was created during the Golden Age. The first part of today's castle was built in 1642. The associated historical park was designed in English style in 1857. Today, about 40 gardeners take care of the park and make sure that it will have a different look every year. 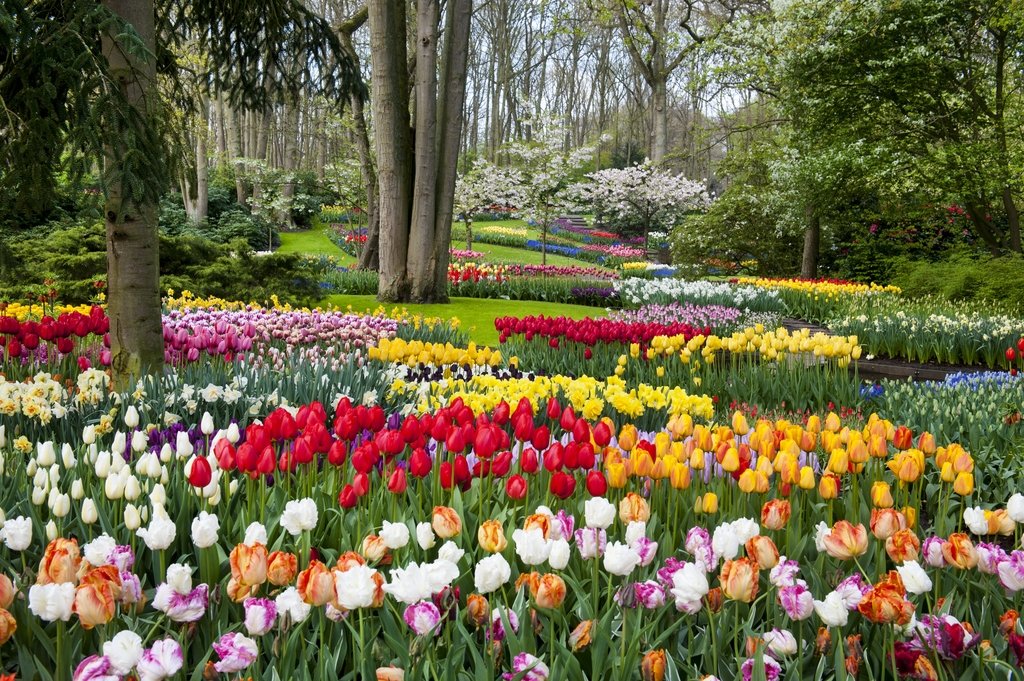 In addition to a mere sea of blossoms, the attractions in the park include 20 flower shows, garden art, a sculpture garden with around 100 exhibits and the "Tulpomania exhibition", which takes visitors on a time travel through the history of the flower bulbs. Children will also find a petting zoo, a scavenger hunt, a maze and a playground. With all these highlights, you don't have to be a prophet to predict that you won't be lonely at Keukenhof. On the contrary: every year a total of one million visitors come here during the two months which are open for visitors. In average, this corresponds to more than 100,000 visitors a week. However, a positive side effect is that the Keukenhof is also easily accessible by camper - the roads are well-developed. There are also large parking spaces where you can park your motorhome for 6 euros during your visit. However, you cannot spend the night here. An alternative for campers are various campsites in the surrounding area. Adults pay 19 euros, children 9 euros admission fee. By the way, tickets for the Keukenhof can also be ordered online in advance for s slightly reduced admission fee - and you'll also avoid waiting in line too long. 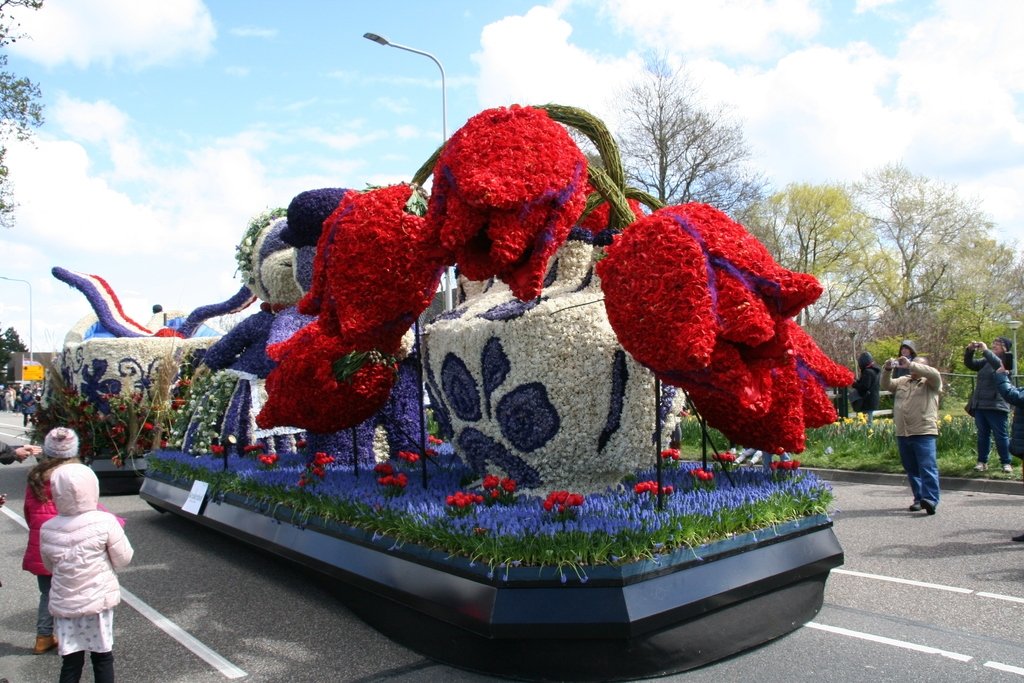 True works of art can be seen during the flower parade. Photo: NBTC

With the camper to the flower parade Bollenstreek

Also well worth seeing is the famous flower parade Bollenstreek, which goes about 40 km from Noordwijk to Haarlem. It consists of around 20 ornate vehicles on which giant figures made of flowers are enthroned, 30 cars decorated with flowers and many music bands. This colorful parade, which is already celebrating its 74th edition on April 17, 2021, is also passing by the Keukenhof. It is usually very crowded here. Less hustle and bustle and usually a better view awaits the spectators along the route and at the other stations of the parade. The colorful vehicles leave Noordwijk at 9:30 a.m., they are expected at Keukenhof around 3:30 p.m. and they arrive in Haarlem at around 9 p.m. If you are traveling with your motorhome, you have the very clear advantage of being able to position yourself along the route and wait for the parade to pass by in a relaxed manner. 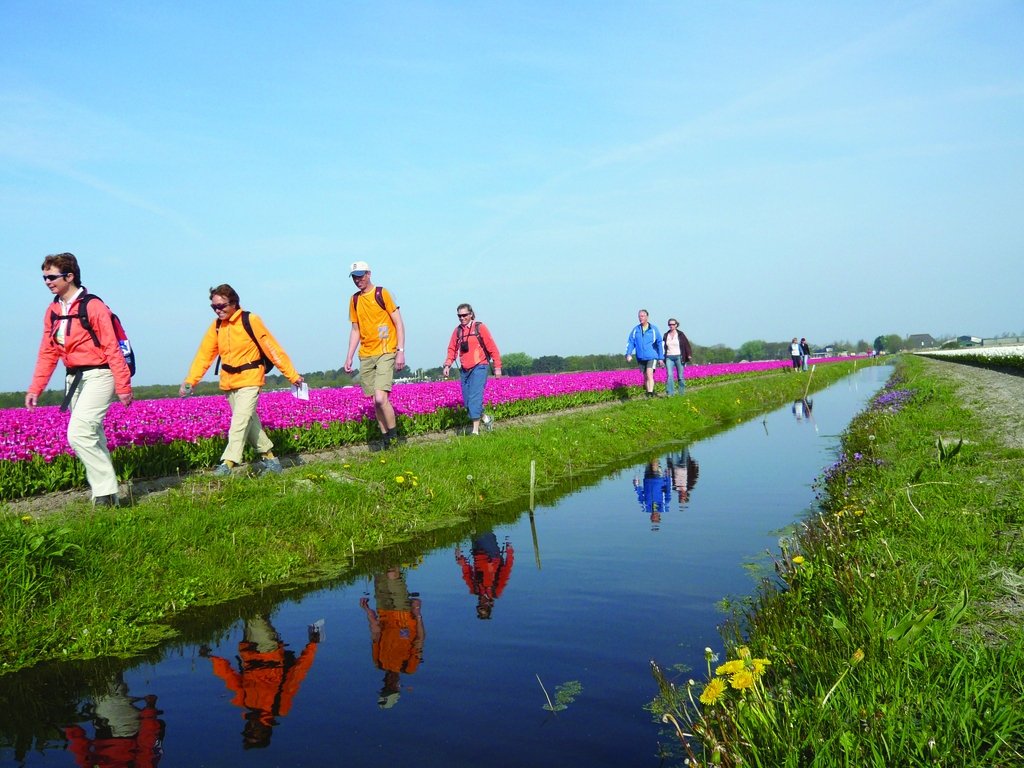 The huge tulip fields can be explored on foot or by bike. Photo: NBTC

Explore the tulip blossom on your own

If you prefer to enjoy the tulip blossom on your own away from the hustle and bustle, you have numerous options with your motorhome or camper van. In the Bollenstreek region, for example, there are numerous ways to experience the colorful fields. The "flower radar" not only gives a good overview of where the individual tulip fields can be found, but usually also shows where it is blooming best. The website is only available in Dutch, but you can use the maps to find your way around even without Dutch language skills. Signposted car routes also lead along the most beautiful flower carpets, for example from Oegstgeest on motorway 44. And in between you can take a break at picnic spots, enjoy a freshly brewed coffee in your motorhome and inhale the scent of spring.

Long bike tours are also great for experiencing the magic of flowers, especially since the routes in the Netherlands are so beautifully flat. And if you don't want to strap your own bike onto your motorhome, you can easily find a bike rental at campsites or elsewhere. Bicycle maps are also usually available here. Good starting points for the signposted tours are, for example, the Keukenhof or Noordwijkerhout. If you want to see the tulip fields on foot, you will find an excellently developed hiking network through the most beautiful tulip fields in Bollenstreek. 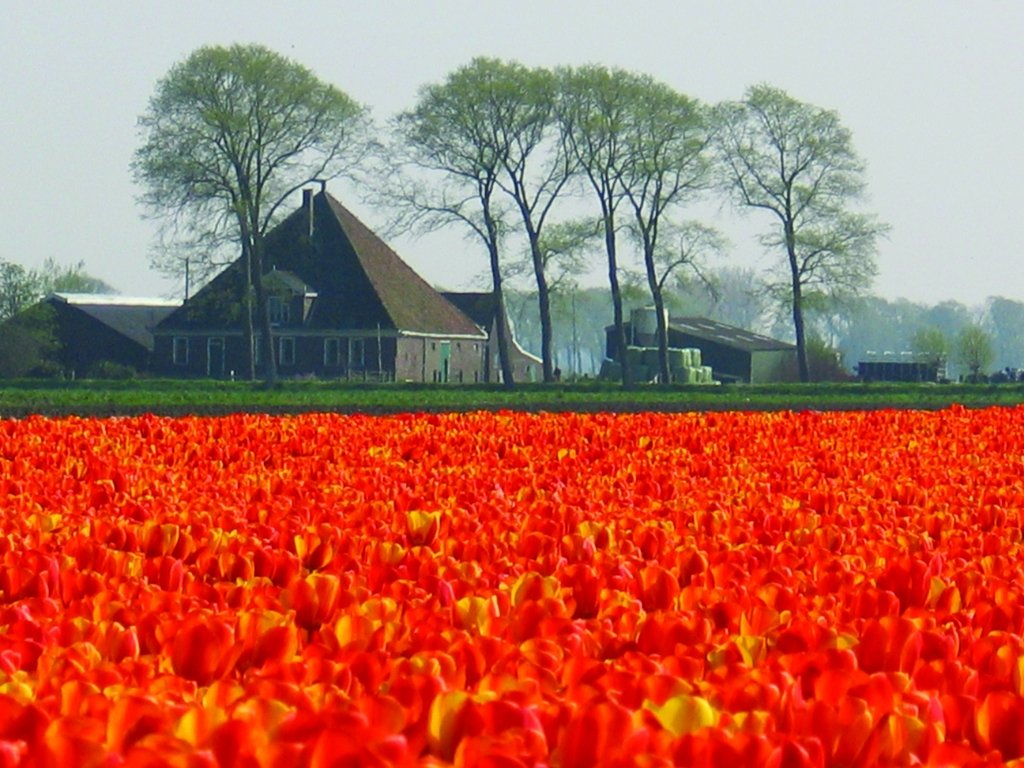 There are also huge tulip fields in the northern part of the Netherlands. Photo: NBTC

In regards to the tulip blossom, the region Noordoostpolder in the province of Flevoland is far less known than the Keukenhof and the Bollenstreek region - and therefore less crowded. Hardly anyone suspects that here - north of Zwolle by the Ijsselmeer - the largest flower-growing area in the Netherlands and also the longest tulip route in the country can be found. The well-signposted route stretches over 100 km along colorful fields spanning more than 1,000 hectares. National Geographic even counted it one of the most beautiful car routes in the world a few years ago. Perfect for a motorhome tour, isn't it? Between mid-April and beginning of May the annual tulip festival also takes place here in the region.

Note: Due to the COVID-19 situation, please enquire about the current status of events and opening hours before starting your trip.