A motorhome tour through south-east France is rich in attractions and diverse landscapes that are difficult to beat. Provence especially is a dream destination for caravanners as the time of year plays an insignificant role. Another advantage for campers: the Provence-Alpes-Côte d´Azur region, which stretches from the Camargue in the west to the Italian border in the east, also has one of the most beautiful coastlines on the Mediterranean, namely the French Riviera.

Nestled between the Luberon massif and the Cevennes mountains, the Mediterranean Sea and the white cliffs of Les Baux lies one of France's dream destinations: Provence. And this is also where you will find those dancing horses, crusaders and gladiators alongside all the scenic beauties that give Provence its mythical character. This area has a unique pull, no matter what the season, and a well-developed infrastructure for camping holidays thanks to the many campsites and parking spaces. 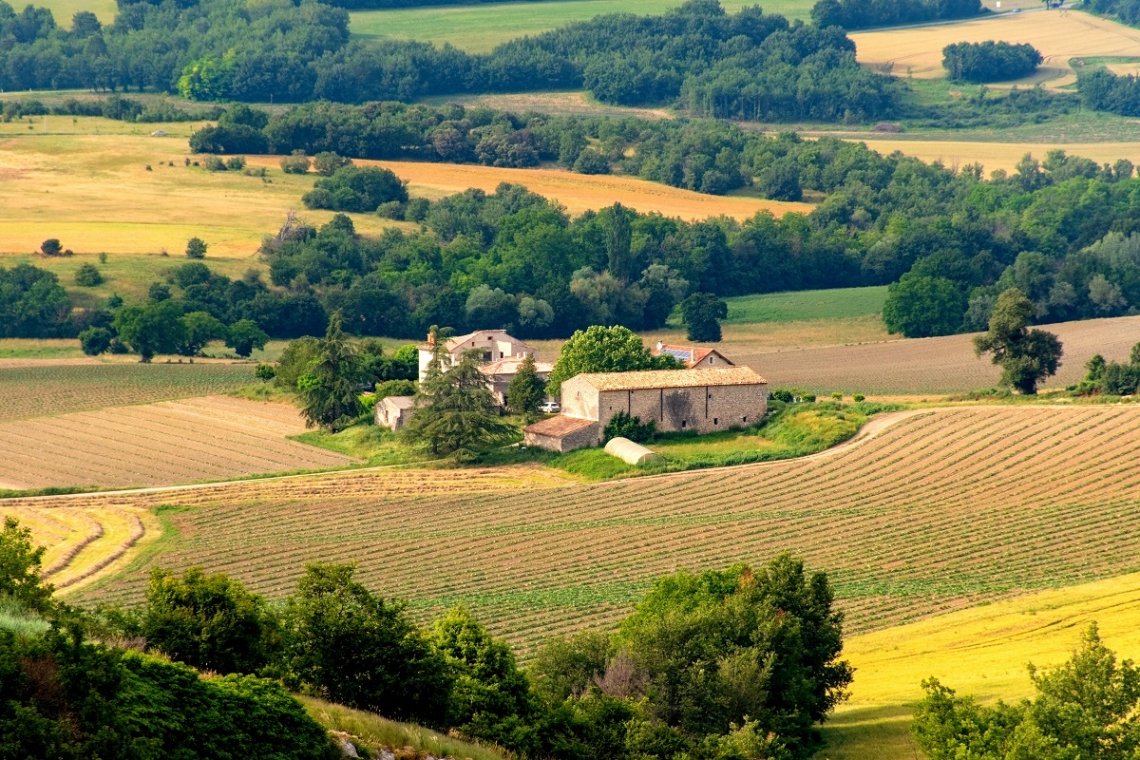 Where is Provence located?

The Provence landscape is part of the official Provence-Alpes-Côte d'Azur region. It stretches from the foothills of the southern Alps to the French Riviera, the "Côte d'Azur". The diverse scenery includes the flat landscape of the Camargue as well as hilly vineyards, pine forests and extensive lavender fields. It has a range of urban environments, with big cities such as Marseille, Toulon and Nice and smaller, sophisticated holiday spots such as Antibes, Cannes and Saint-Tropez. The region is divided into six departments: Alpes-de-Haute-Provence, Alpes-Maritimes, Bouches-du-Rhône, Hautes-Alpes, Var and Vaucluse. The total area, with about five million inhabitants, covers 31,400 km². Around 900,000 people live in Marseille, the capital and largest city in the region. 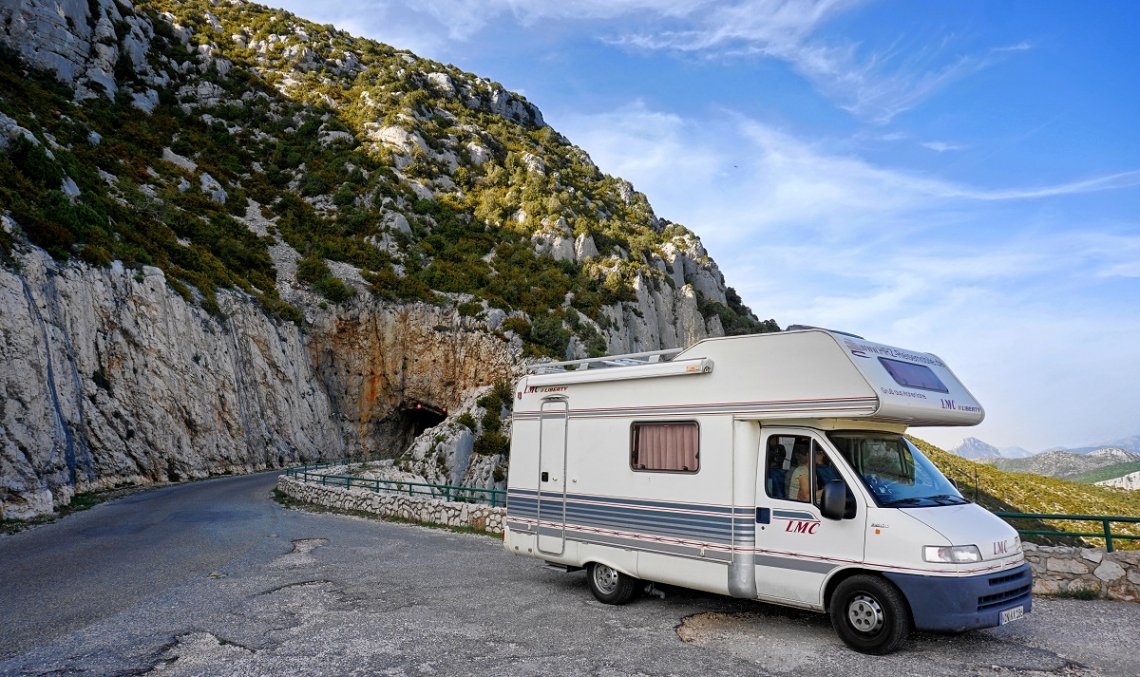 Provence is a year-round destination for campers. Photo: Pixabay

When is the best time to visit Provence?

When an area boasts over 3,000 hours of sunshine a year, there are basically no restrictions on what the right time to travel is. The climate in Provence and on the French Riviera is consistently mild and Mediterranean. In winter, temperatures on the coast are often above 10 °C, and even 20 °C is not unusual. It can obviously get colder in the hinterland and at the foothills of the Alps. Night frost is only to be expected inland, which shouldn't be a problem with good heating in a mobile home or caravan, but it is generally quite mild with an average temperature of 13 °C. Spring shows its face in the coastal regions at the end of January when the mimosa trees start to flower. The summers are dry, with an average temperature of 28 °C, whereas heavy rain showers are not rare in autumn and can lead to floods and road closures.

The amphitheatre in Arles is one of the most important attractions and buildings in Provence. Photo: Pixabay

Besides Avignon and Aix-en-Provence on the western edge of the region, it is definitely worth stopping over in Arles, famous for its magnificent amphitheatre and traces of the painter Vincent van Gogh. The construction of the new LUMA Arts Resource Centre in a ten hectare area of an abandoned railway yard has given the city a further boost. The 56 m high tower building, designed by Franck Gehry for the LUMA Foundation and partially covered with stainless steel, extends over an imposing nine floors. The modern building was opened in spring 2018 as an interdisciplinary art centre. Its aim is to support and produce exhibitions and ideas, research and training. And it also houses archive facilities.

All About Travelling 1 year ago

The German architect Annabelle Selldorf, who lives in New York, was responsible for the renovation of the former workshop building, which is now also used for exhibitions. The outdoor area was designed by the Belgian landscape architect Bas Smets. The Swiss art patron Maja Hoffmann founded the Fondation LUMA in 2004. She is the driving force behind the foundation in Arles, which is committed to art, human rights and the environment. The city of Arles is rich in cultural heritage as it is, and you can walk through all the architectural periods since Roman times, with the LUMA Tower well on its way to becoming another landmark in Arles in the 21st century. 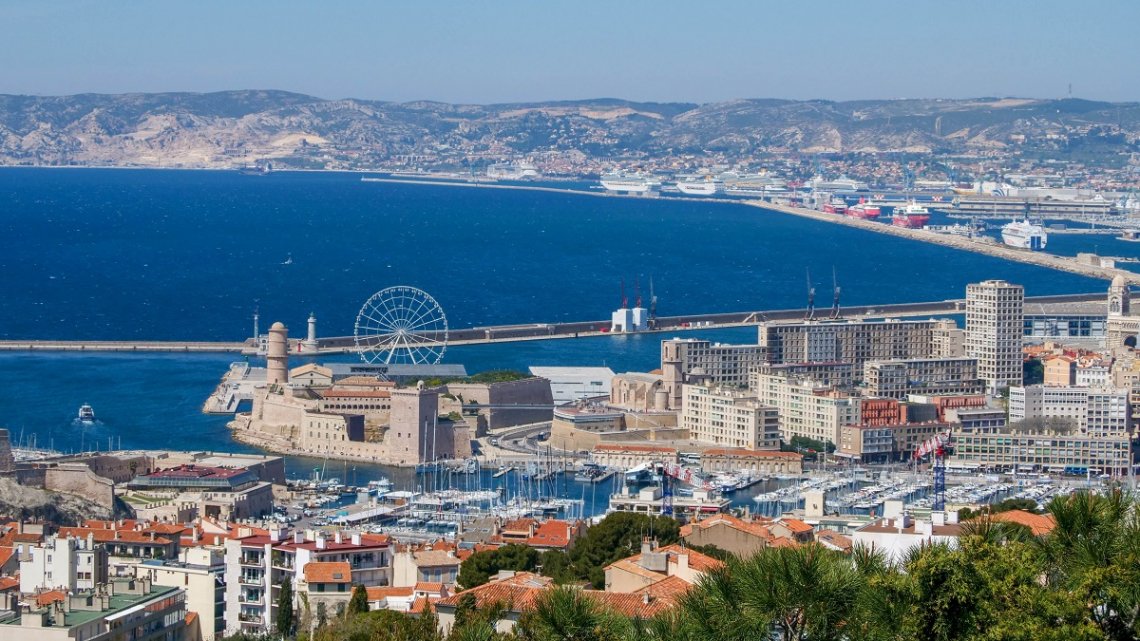 Lively Marseille has a lot to offer, especially for anyone interested in culture. Photo: Pixabay

Marseille is a lively, pulsating port city full of attractions, and you will need more than one or two days to visit them all. For years, people have been saying that the entire city is crazy. Between 1947 and 1951, the Swiss architect Le Corbusier built La Cité Radieuse in Marseille – a modern block of flats, too modern for the time, that attracted a lot of criticism and triggered a debate. From then on, the building was called la Maison du Fada, "The Madman's House". As is so often the case, the years have done the architect justice.

More than half a century after it was built, this abstract residential unit is enjoying enormous popularity. Visited by admirers from all over the world, the building changed its status from an architectural landmark to an urban myth and has been a UNESCO World Heritage Site since 2016. The MaMo Marseille Modulor has been housed on the roof of the Cité Radieuse since 2013 – an art and cultural centre founded by the Marseille designer Ora-Ito, which mainly holds contemporary exhibitions by young artists. Communal facilities at La Cité Radieuse are free to visit every day. Flats can also be visited either by reservation or by taking part in a guided tour offered by the Marseille Tourist Office. 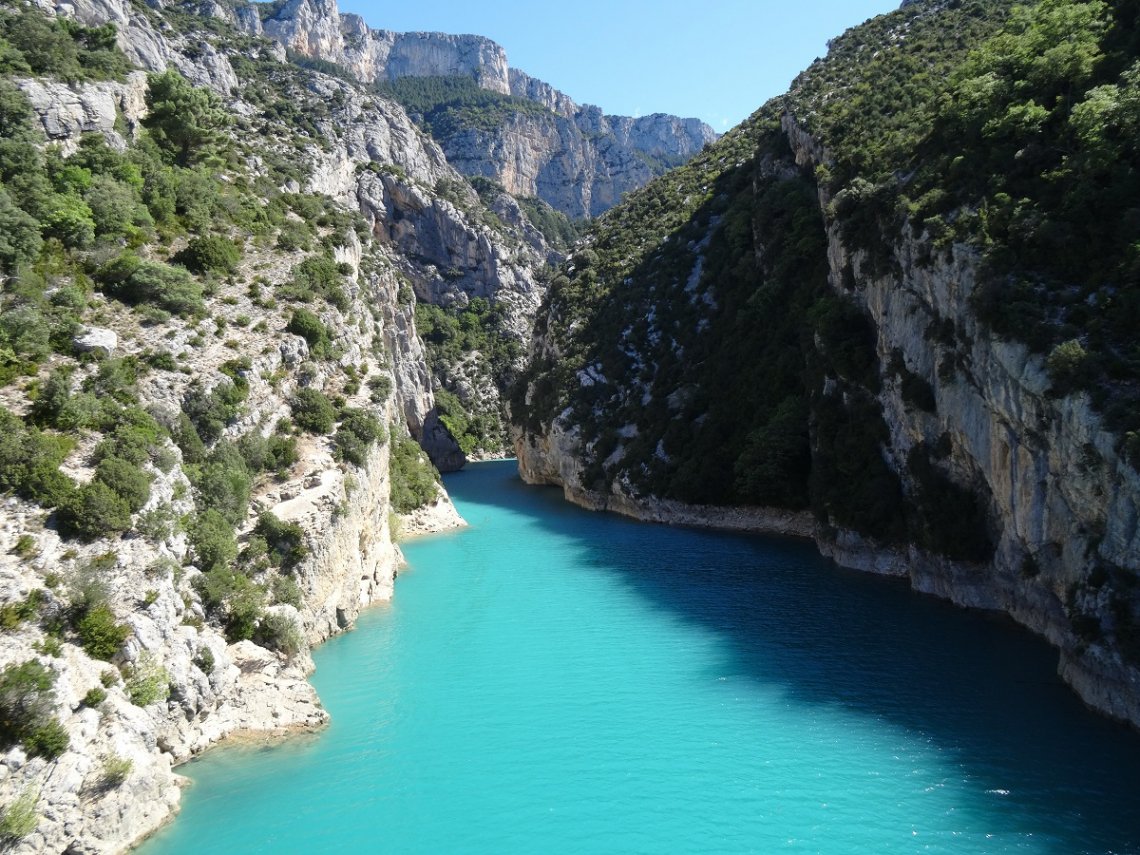 The impressive nature of the Verdon Gorge can be enjoyed especially in the off-peak seasons. Photo: Pixabay

Top stops for a motorhome tour – tip #3: the Verdon Gorge

In the heart of Provence lies a scenic attraction that almost everyone has heard of: the Verdon Gorge. The Grand Canyon of Provence has always been a tourist magnet. You can simply park your motorhome and explore the area by bike – mountain bikes or e-bikes are definitely an advantage here. But there are also less strenuous tours. Primarily aimed at families, three new cycle tours were recently set up in the Le Verdon à Vélo cycle path network. They run from the Plateau de Valensole, famous for wide lavender fields, to the Lac d'Esparron reservoir. The shortest route, the Balcons d'Esparron, is 33 km long and runs from Gréoux-les-Bains to Esparron-de-Verdon. The Petit Plateau route is 37 km long and runs from Gréoux-les-Bains to Valensole, then on to Allemagne-en-Provence and Saint-Martin-de-Brômes. The Basses Gorges route is just as long and runs from Allemagne-en-Provence to Quinson, where the prehistoric museum is well worth a visit.

However, it should be noted that although there are many campsites around the Verdon Gorge, they are usually only open during the camping season, i.e. until the end of September or mid-October. Nevertheless, parking spaces are available in e.g. Les Salles-sur-Verdon or Riez all year round.

Not only does lavender thrive in Provence – cacti and succulents also feel at home here. Photo: Jörg Berghoff

The town of Saint-Maximin-La-Sainte-Baume in green Provence is best known for the Sainte-Marie-Madeleine basilica. It is the largest Gothic church in all of Provence and houses one of the most impressive baroque organs in France, attracting music lovers from all over the world. The relics of St Mary Magdalene rest in the crypt, making it one of the most important Christian tombs. Pilgrims from many countries still come together here and visit the church and the rock cave in the mountains where the saint is said to have lived in isolation for 30 years. Winding its way up from the Saint-Maximin plain to the grotto, the pilgrimage route is also called the "Kings' Road" – from the 13th to the 16th century, around forty crowned heads are said to have walked this path, which earned it the name "Le Chemin des Rois".

Uzès is undoubtedly one of the most charming smaller towns in Provence. Designated a Ville d'Art et d'Histoire, "City of Art and History", it does what it promises. The Saint-Theodorit Cathedral and the Tour Fenestrelle, "Window Tower", are the town's landmarks, along with the Ducal Palace. But other picture-perfect palaces such as the Baron de Castille's residence, the Maison d'Uzès and the Chambon de la Tour also add to the charm of the city. A visit to the beautiful Place aux Herbes with its arcades is a must. It has often served as a film set and has many inviting cafés for relaxing and people watching. The square explodes with colour on Saturday mornings when the market is open. The selection of regional products is so huge that it's a paradise for amateur chefs – and a feast for foodies.

Culture and Food Discover Brittany by caravan or motorhome